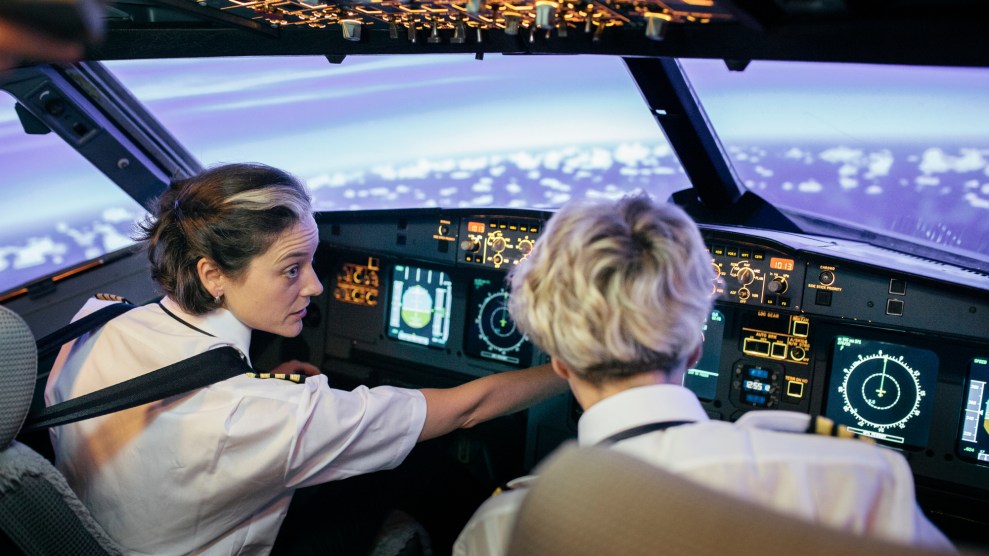 Airlines are "no stranger to sex stereotypes," but a group of pilots and flight attendants are pushing back on that.Thomas_EyeDesign/Getty

Back in 2013, Shannon Kiedrowski was 11 years into her dream job as a pilot at Frontier Airlines when she gave birth to her second child. On her first day back from maternity leave, a coworker-friend asked whether Kiedrowski planned to pump breast milk on the job, like she had during her first pregnancy. “I said, ‘Oh yeah, I’m still going to,'” Kiedrowski remembers. “Somebody overheard that conversation and he must have felt uncomfortable, so he reported me to the chief pilot’s office.”

When Kiedrowski met with Frontier’s HR department and the chief pilot, they questioned her about “why she was breastfeeding, why she was not choosing to feed her child formula, and why she thought it was acceptable to use a breast pump in the aircraft.” Kiedrowski pointed out that she knew she had certain rights under the law in Colorado, where Frontier is based.

A few days later, the airline told Kiedrowski she was forbidden from pumping at work and told she would no longer be paid her salary if she wasn’t able to fly her required hours. Eventually, Kiedrowski was allowed to pump in between flights in the plane lavatory, so long as she did not cause flight delays. She continued to push for accommodations, as well as a company-wide policy in support of nursing mothers, but was told a policy change was unnecessary because her “situation” was an “anomaly.”

But what she experienced appears to have not been so unusual. On Tuesday, Kiedrowski and three other Frontier pilots filed a class action lawsuit against Frontier, alleging that the airline’s policies violate federal employment law by discriminating against pregnant and nursing employees. The ACLU, which is representing the pilots, also filed a companion lawsuit against Frontier on behalf of pregnant and nursing flight attendants.

Frontier, which is one of the biggest airlines in the country, employs almost 100 female pilots and more than 1,000 female flight attendants. According to the lawsuit, the airline forced pilots into unpaid leave 32 weeks into their pregnancy, even though pilots temporarily unable to fly because of other medical conditions were generally reassigned to non-flying, “ground” positions. The flight attendants similarly claim they were unfairly penalized for pregnancy-related absences and forced to take unpaid leave after a certain point in their pregnancies. Both groups say they were forced to pump their breasts in unsanitary and inadequately private places, such as the airplane lavatory. They say their requests for accommodations were either ignored or outright denied. Those that couldn’t pump suffered from leaking breasts, painful infections, and a reduction in their milk supply. Others ended up taking unpaid leave for the entire, months long period they were breastfeeding.

Title VII of the Civil Rights Act bars employers from discriminating against employees who are pregnant or experiencing pregnancy-related conditions, and courts have ruled that lactation is a pregnancy-related condition. In Colorado, the state’s Workplace Accommodations for Nursing Mothers Act requires employers to provide employees break time and a private place, other than a toilet, to pump breast milk for up to two years after giving birth.

Even before the breast pumping fiasco, Kiedrowski was familiar with rearranging her professional life for her family. In anticipation of having children, she took a demotion, from captain to first officer, in order to have more control over her schedule. She knew she would need added flexibility once childcare became a concern. But what she gained in flexibility, she lost in salary. At Frontier, the senior-most first officer still makes about $22 an hour less than a first-year captain. Other major airlines, such as Delta, Southwest and United, have even bigger pay differences.

“The [aviation] industry is no stranger to sex stereotypes,” says Galen Sherwin, senior staff attorney for the ACLU’s Women’s Rights Project. “Certainly the glass ceiling is there in full force. The industry as a whole definitely has a problem with having its head in the sand about the fact that members of its workforce become pregnant and breastfeed. Their response overall has been essentially to ignore the problem.”

After publication, a spokesperson for Frontier emailed Mother Jones to deny the allegations. “Frontier Airlines has strong policies in place in support of pregnant and lactating mothers and remains committed to treating all of its team members equally and fairly,” the company wrote. “Frontier offers a number of accommodations for pregnant and lactating pilots and flight attendants within the bounds of protecting public safety, which is always our top priority.”

A 2016 report from the Center for WorkLife Law, a research organization at the University of California-Hastings, found, unsurprisingly, that pregnancy-based discrimination was most acute in male-dominated industries. In the aviation industry, women hold the majority of flight attendant positions, but only make up about 6 percent of pilots. “Supervisors believe that pregnant women, and mothers in general, are not going to be as competent and committed to their jobs,” says Cynthia Calvert, an advisor at the Center. Prior to the passage of Title VII’s Pregnancy Discrimination Act in 1978, flight attendants were routinely fired as soon as they disclosed they were pregnant. Women with families were never hired at all.

The lawsuit against Frontier is the first of its kind against an American airline. In 2016 Delta pilots successfully lobbied their predominately-male union for paid maternity leave so they could stay home and pump. That same year, a flight attendant for one of Delta’s regional airlines filed a complaint with the New York City Commission on Human Rights alleging that the company didn’t provide adequate breast pumping facilities (Delta settled the case in 2017). And an employment tribunal in England ruled in favor of two EasyJet flight attendants who filed discrimination charges because of the company’s ban on pumping at work. Since then, EasyJet and a handful of other airlines have implemented more comprehensive maternity and paternity policies.

Calvert says that companies might be finally waking up to the fact that discriminating against pregnant employees is far worse for the bottom line than accommodating their pre- and postpartum needs.

“I would encourage employers to look at the larger picture,” Calvert says. “Their [discrimination] may be targeted at just a couple of women, but it really reverberates through an organization. It affects attrition and it also affects your reputation and it affects recruiting. It affects your customers, who may not be happy that they’re doing business with a company that is anti-family.”

This article has been updated to include a statement from Frontier Airlines.