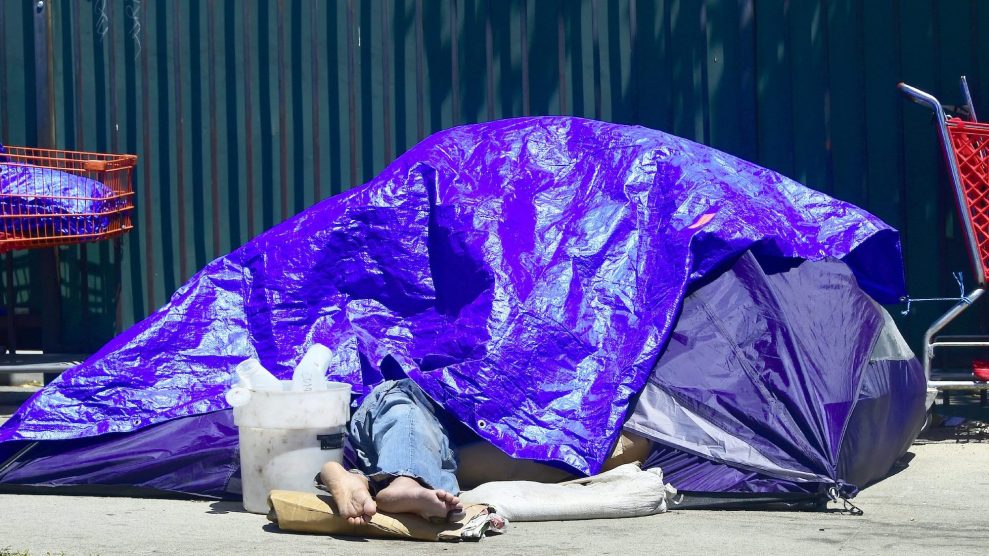 After nearly three years of paying little attention to the homeless crisis in the United States, the Trump administration has become more actively involved in the subject, and that’s gotten advocates for homeless people worried. First, after President Donald Trump visited California over the summer, he disparaged the homeless population of San Francisco in a tweet and in interviews following his visit. This culminated in the EPA accusing the city of violating the Clean Water Act, justifying the action by an unsubstantiated claim that the city’s homeless people were contaminating the water supply with raw sewage and needles. Next Trump sent envoys to California to study homelessness and draw up policy recommendations to address the problem. In September, the White House Council of Economic Advisers looked at homelessness and released its findings in a report that argued, among other things, that rent control and high-quality shelters incentivize homelessness.

Then, in November, Matthew Doherty, the Obama appointee who’d been in charge at the US Interagency Council on Homelessness since 2015, was forced to resign. This week the administration announced its pick for his successor was Robert Marbut, a former community college civics professor and San Antonio City Council member with a longtime side gig as a policy consultant on homelessness. On December 10, the council of USICH, which includes the heads of 19 federal agencies, will vote on whether to confirm Marbut to the role of executive director.

Diane Yentel, president of the National Low Income Housing Coalition, an advocacy group that seeks to expand affordable housing, sees the administration’s sudden interest in the homeless crisis as foreshadowing a greater change in the way the federal government confronts the issue. “The administration is working on some type of executive order around homelessness,” she says. “It appears that Matthew was removed and Robert will be put into this position in order to carry out [those] policies.”

That shift in policy could deprioritize permanent housing for the homeless population, which most experts agree is the first step to alleviating the problem. Marbut comes from the camp that sees the causes of homelessness less as a question of affordable housing and more as one of an individual’s behavior that should be changed. With his background as a city council member and his unorthodox approach to gathering data—he’s known adopt a homeless disguise when conducting his research—Marbut has been able to present himself as a homeless policy visionary. But his ideas fly in the face of conventional wisdom on homelessness.

“There is a fair amount of consensus that Housing First is the best policy to try to reduce the number of people who are homeless.”

The last two administrations have advocated for policies known as Housing First, which address homelessness by prioritizing the provision of permanent housing. “There is a fair amount of consensus that Housing First is the best policy to try to reduce the number of people who are homeless,” says Nan Roman, CEO of the National Alliance to End Homelessness. “People just do better. It’s kind of intuitive that we do better when we have a stable place to live.” Other experts in the field with whom I spoke agree, and it’s backed by numbers. New Jersey, which has used Housing First policies for more than a decade saw its homeless population drop by 46 percent between 2007 and 2017.

In contrast, Marbut considers the root causes of homelessness to be behavioral. He’s become a kind of traveling salesman peddling his formula to cure homelessness by discouraging conduct, such as panhandling, that he thinks perpetuates the state. Many homeless shelters offer regular services, like meals and a place to sleep, but aren’t open all day. He urges that services be provided at a centralized shelter open 24 hours, which has the effect of also keeping the homeless population isolated from the public. Marbut has spent much of the last decade sharing this approach with municipal governments across the country. “Too often there are no consequences for negative behavior of [homeless] individuals,” he wrote, which encourages them to continue a lifestyle of vagrancy without incentive to leave it.

His philosophy is summarized in a 2013 guide he compiled for the city of Key West, Florida, that calls for a “culture of transformation.” The subtitle, “Moving from Enablement to Engagement,” sounds as if it had been ripped from the wall of a rehab center, but its actual recommendations lack the inspirational tone. He calls for an end to the practice of distributing food and supplies to homeless people, which he calls “street feeding,” and claims that most panhandlers really aren’t homeless at all, but grifters who prey “on the good nature of citizens to get tax-free dollars.” Marbut’s guide makes homelessness sound like a choice its adherents need to be convinced to leave behind.

He calls for an end to the practice of distributing food and supplies to homeless people, which he calls “street feeding.”

This record has homeless advocates concerned; they say Marbut’s views on the issue are misguided at best, dehumanizing and draconian at worst. Murbut talks about homelessness “like it’s a personal flaw,” Yentel says. “He dismisses the clear structural challenges of a lack of affordable housing that exacerbate homelessness.”

Though advocates and experts on homelessness like Yentel disparage Marbut’s approach to alleviating homelessness, many municipalities across the country have found his pitch compelling. Cities like Fresno, California; St. Petersburg, Florida; and San Antonio, Texas; have hired him as a consultant. Outside of his model for a 24-hour shelter, however, homelessness and its behaviors are not to be tolerated. In some cases, Marbut has pushed to criminalize giving food to homeless people. At his shelters, people are removed at high rates. The results have been mixed.

In 2015, HuffPost reported that a homeless shelter in St. Petersburg, Florida, built under Marbut’s guidelines of all-hours availability and swift punishment for rule-breaking only saw 7 percent of its residents transfer to permanent housing over a two-year period. More than 80 percent left without a known reason or were booted for breaking rules. In contrast, places that have leaned into Housing First policies tend to see greater long-term success, such as higher rates of economic stability. Conditions at the shelter were also troubling—with residents forced to sleep outside when beds were in short supply, or for minor infractions like lack of hygiene. Marcus Franklin, who was homeless and spent time at the St. Petersburg shelter, told HuffPost that some of its population was forced to the outdoor bedding area, even during violent storms:.”That whole area’s flooded and you still got to sleep out there,” he says. Referring to the metal tents, he added, “Those things have no sides on ’em. The water’s still hitting you. You’re soaking wet.”

“His approach is literally to have people sleeping on mats in a shelter courtyard and to call that ending homelessness,” Yentel says. “It’s absurd.”

As head of USICH, Marbut would be in charge of an agency that coordinates and oversees the spending of about $5.5 billion across more than a dozen federal agencies. In practice, it coordinates initiatives that require cross-agency funding—like HUD and HHS working together to provide homeless veterans housing and health care. But USICH doesn’t have the authority to regulate how those agencies spend money. Based on his unorthodox views of addressing the problem, and his potential access to Trump, advocates are concerned that Marbut could help persuade the president to pull funding across agencies that contribute to Housing First policies.

His position carries weight in other ways as well: A prominently-placed government official calling Housing First policies into question could undermine them nationally. “He does have a bully pulpit and an opportunity,” Yentel says. “To spread and reinforce harmful stereotypes really feeds into some people’s fears about homelessness.”

Concern over the damaging effect of Marbut’s potential posting isn’t restricted to the world of national advocates. Some of those who work in state and local governments are concerned as well. Jennifer Ho, commissioner of the Minnesota Housing Finance Agency and a former USICH office, says mixed messaging on Housing First policies presents a very real threat at the local level. “There’s been a long time for that message to sink in,” she says. “Even just the message backtracking isn’t helpful for getting folks inside and into homes.”

Ho also questions the strategy of getting rid of housing initiatives that have proven to be effective and replace them with presidential executive actions that would realign federal funding away from Housing First policies. “If we could have ended homeless with an executive order,” says Ho, “President Obama would have signed it.”