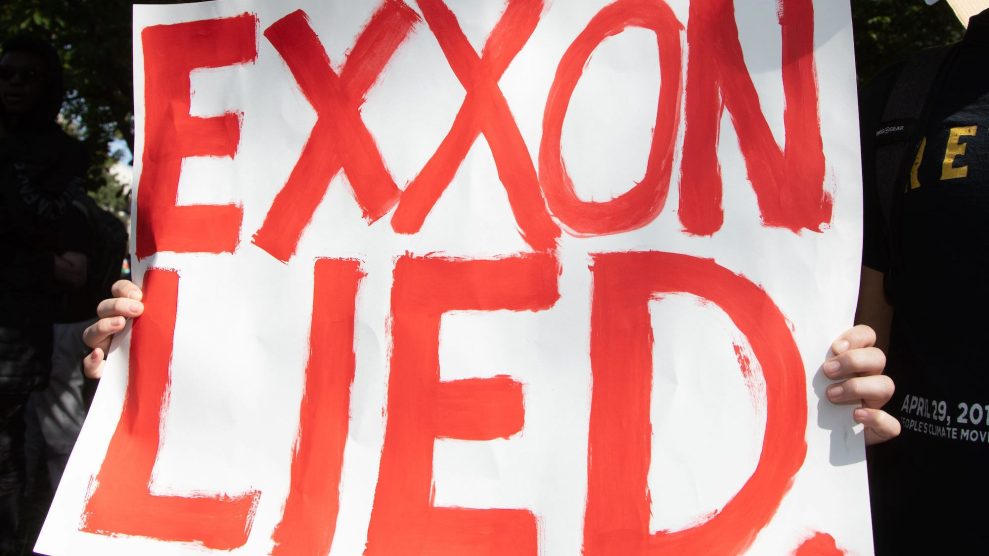 Protesters, many of them children, took to the streets in Washington, DC, to demand action on climate change on September 20.Jeff Malet/Zuma

In light of recent revelations that ExxonMobil determined as far back as 1982 that humankind had contributed to climate change and then withheld that knowledge from the public for almost four decades, Elizabeth Warren released a plan on Tuesday to make it a crime for corporations to knowingly spread misinformation. Warren’s “corporate perjury” law would subject corporate representatives who lie to federal regulators to fines and possible jail time.

The longstanding false narrative Exxon told, before finally acknowledging human-caused climate change in 2014, is exactly the type of misinformation regime the policy was created to combat. “That is corruption, plain and simple,” says Warren campaign spokesperson Saloni Sharma. “Elizabeth’s plan to end Washington corruption will prosecute companies for perjury when they knowingly engage in egregious and intentional efforts to mislead the public and prevent our government from understanding and acting on the facts.”

Perjury is an infamously difficult crime to prove, requiring the exhaustion of any possibility that a false statement was simply made in error. But under Warren’s proposal, if prosecutors successfully charge someone with lying to regulators on behalf of a corporation, the perpetrator could face up to $250,000 and time behind bars.

Right now, Exxon is locked in a court battle in New York with the state attorney general, who alleges that Exxon executives committed fraud by providing incongruent narratives to shareholders and the public. To the former, it minimized the threat and relevance of climate change, while assuring the latter it was tackling the climate issue head on. In this case, Warren’s anti-perjury policy could have bolstered the state’s investigation against Exxon, considering the amount of time the company spent publicly denying its role in climate change.

This proposal is part of a wider set of initiatives the campaign has set forth to prevent corporations from lying to the public. Last month, Warren called for barring federal entities from considering research that was not peer reviewed or was funded by an industry. In her proposal, Warren noted that industry groups habitually peddle misleading information to secure laws and regulations that benefit them. “I’ll crack down on corporations who manipulate agencies by submitting sham research — like the climate denial studies bought and paid for by oil and gas magnates like the Koch Brothers,” her proposal states.