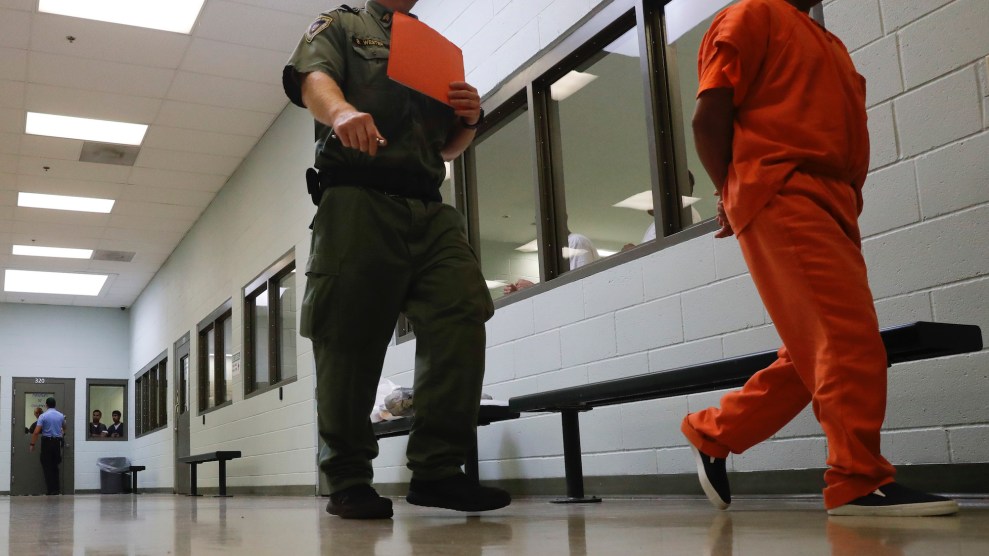 A guard walks with a detainee in the Adelanto ICE Processing Center.Chris Carlson/AP

In his inaugural address in January, California Gov. Gavin Newsom declared private prisons an “outrage” and promised to end them “once and for all.” Today, he signed the strictest private prison ban in the country, setting the stage for thousands of immigration detainees and prisoners to be transferred out of facilities operated by for-profit corporations.

The move comes as major banks are abandoning the private prison industry, Democratic presidential candidates are calling to abolish it, and outrage is mounting over its role in facilitating President Donald Trump’s hardline immigration policies.

“We are sending a powerful message that we vehemently oppose the practice of profiteering off the backs of Californians in custody,” the bill’s author, state representative Rob Bonta of Alameda County, said in a statement. “We are committed to humane treatment for all.”

The law will end the California corrections system’s experiment with private prisons, which accelerated in 2009 when a federal court ordered the state to reduce dangerous overcrowding in its prison system. As part of its overhaul of its criminal justice system, the state sent some of its prisoners to a handful of private prisons, including facilities in other states. But over the last few years, as the state’s prison population has fallen, it has gradually moved inmates out of private prisons and into state-operated facilities.

As of June, about 2,222 prisoners—less than 2 percent of California’s roughly 125,000 inmates—remained in four private facilities operated by the GEO Group, the country’s largest private prison company. Two weeks ago, the state corrections department announced it was removing inmates from the Central Valley Modified Community Correctional Facility. The remaining three private prisons are expected to close by 2023, at their end of their current contracts, though the new law allows them to continue to be used if needed to comply with a court-ordered cap on the state’s prison population.

The new ban’s more immediate effects could be felt next year, when contracts expire for major federal immigration detention centers with space to detain up to 4,500 people. GEO’s Adelanto and Mesa Verde detention centers are currently operating under temporary contracts that expire in March 2020; ICE’s contract for Otay Mesa, a CoreCivic detention center outside San Diego, will expire that June. An ICE spokesperson told the Sacramento Bee the agency plans to transfer its California detainees to other states if the ban takes effect. “The impact of such a state law would be felt almost exclusively by residents of California who would be forced to travel greater distances to visit friends and family in custody,” she said.

The ban may first have to survive a legal challenge. In July, the state Senate’s judiciary committee predicted that the Trump administration will sue the state for infringing on federal immigration law and contractual obligations, and it guessed that California would prevail in such a suit.