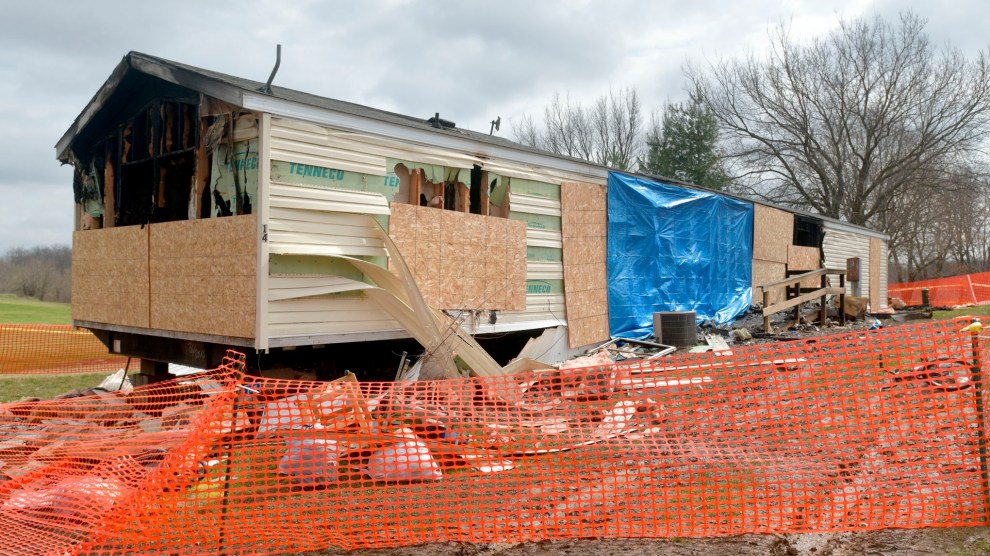 A trailer home that was destroyed by fire northeast of Goodfield, Illinois. Matt Dayhoff/Journal Star via AP

On Monday, a nine-year-old boy in a checkered shirt sat in a juvenile court in Woodford County, Illinois, accused of murdering several of his relatives by setting fire to a mobile home. As he slid forward in his chair, his feet barely reached the ground.

The Chicago Tribune captured the scene at the arraignment hearing, where Judge Charles Feeney tried to explain the charges to the confused elementary schooler:

Feeney read the first count to the boy, saying that he’s alleged to have “committed the offense of first-degree murder and you…set fire to trailer residence…thereby caused the death of Jason Wall.” When Feeney asked the boy if he understood, he shook his head no. “What don’t you understand,” he asked.

“What I did,” the boy said. The judge started over, stopping on certain words to define them for the boy.

The judge introduced another count by comparing it to the previous: that it was “essentially the same thing, that you set the fire to the trailer residence on same date and everything, only in this instance, Ariel Wall died. Do you understand what is alleged in count four?”

“In count five, it alleges essentially the same thing, only it alleges the death of Rose Alwood. Do you understand what is alleged in count five?”

“Yes,” the boy said. A moment later, the boy’s attorney, Peter Dluski, spoke up. “Your honor—I apologize—he told me he doesn’t know what alleged means.”

“No,” the boy said. Feeney explained other words and aspects of the case…

“He wants to know what arson is, your honor,” Dluski said.

The boy, whom Mother Jones will not name because of his age, is accused of intentionally setting the April blaze that killed four of his relatives and his mom’s boyfriend near Goodfield, Illinois. The case has garnered national attention, and prompted outcry from juvenile justice advocates who say a nine-year-old is far too young to be prosecuted in court.

If convicted, he would not be sent to juvenile hall because of his youth. But the court could put him on years of probation, according to the Tribune. And if he were to violate any of the complicated terms of probation, he could be detained after he turns 10, and sent to prison once he turns 13.

“It’s very unusual,” Elizabeth Clarke, president of the Juvenile Justice Initiative in Illinois, told the Washington Post of the case. “It’s a shocking approach that the prosecutor chose to take.”

Katie Alwood, the boy’s mother, told CBS News that her son was recently diagnosed with schizophrenia, ADHD, and bipolar disorder.

While it is rare for a child so young to face such serious charges, Illinois is not the only state that allows nine-year-olds to be put in this situation. Far from it. Twenty-nine states have no lower age limit for prosecuting children in juvenile court, which means it’s perfectly legal to bring charges against children of any age, according to the National Juvenile Defender Center. That’s even as the Supreme Court has recognized that children are less culpable than adults because their brains aren’t developed yet. And it’s despite research showing that early involvement in the criminal justice system can be bad for kids’ health and make them more likely to commit crimes later.

The National Juvenile Defender Center put together a map showing the situation in each state:

The boy will continue to fight his case; the judge set another hearing for November. Alwood told CBS News that her son deserved a second chance: “Yes, it was a horrible tragedy, but it’s still not something to throw his life away over.”