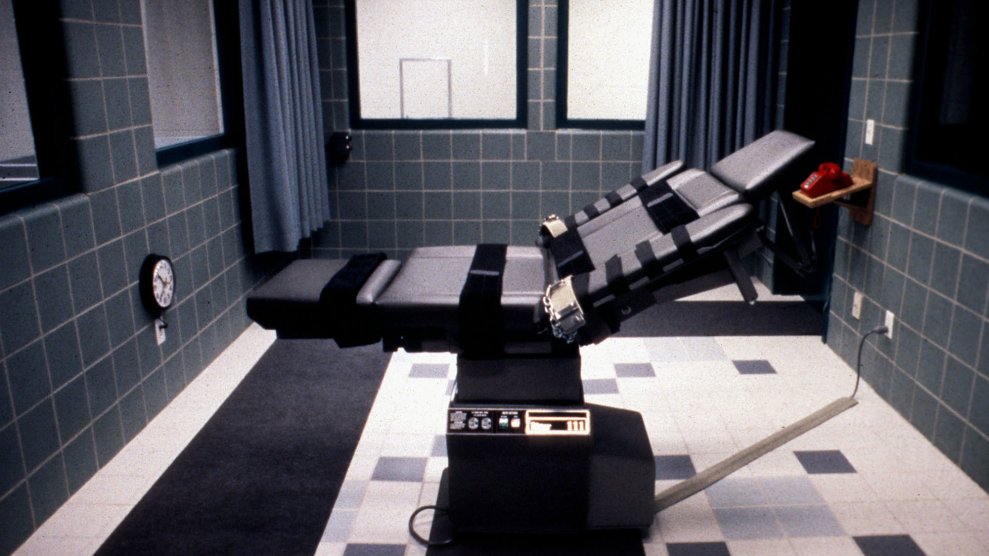 After a 16-year hiatus, the Department of Justice announced on Thursday that it would be resuming the execution of inmates who are on federal death row. The executions will begin in December, when five inmates charged with grisly murders will be sent to the federal execution chamber at the US Penitentiary in Terre Haute, Indiana.

“Congress has expressly authorized the death penalty through legislation adopted by the people’s representatives in both houses of Congress and signed by the President,” Attorney General William Barr said in a press release. “The Justice Department upholds the rule of law—and we owe it to the victims and their families to carry forward the sentence imposed by our justice system.”

Though the press release stated that all five men had exhausted their legal appeals, experts are certain there will be challenges to their executions in the coming months. “There are a lot of questions left to be answered,” says Megan McCracken, a lethal injection expert at University of California School of Law’s Death Penalty Clinic. Some of the biggest ones revolve around the protocol, namely where the drug came from, what’s in it, the details of the procedure, and the qualifications of the staff tasked with killing the inmates. “The courts have got to have the opportunity to review these questions,” McCracken explains.

The first question is where the DOJ obtained the drug and what exactly is in it. In 2010, European drug manufacturers began to refuse to sell their products to US prisons for executions, citing moral opposition or business reasons. This led to a shortage and forced states and the federal government to adopt alternative methods or impose a de facto moratorium.

The DOJ plans to use a single dose of pentobarbital—a sedative—which it compares to current methods used in Georgia, Missouri, and Texas. But it’s not that simple. “There’s the big unknown of what exactly is this pentobarbital,” says McCracken. “Whether or not it will cause death without cruel and unusual suffering all depends on what it actually is.” In Texas, after the state obtained the drug from a compounding pharmacy with scores of safety violations, there were two botched executions in January 2018. Witnesses say death row inmate Anthony Shore trembled on the gurney and said, “Ohh weeee, I can feel that it does burn. Burning!” Less than two weeks later witnesses said William Rayford was shaking and appeared to be in distress.

Then there’s the question of who will be charged with carrying out the executions. When Oklahoma attempted to execute Clayton Lockett in 2014, after struggling to find a vein to insert the IV, Lockett groaned, convulsed, and was in visible distress before he was finally pronounced dead 43 minutes after the procedure began. Initial autopsies revealed that the cause of the botched execution was a possible case of incompetence on the part of the executioners; they had failed to properly insert the IV.

After Lockett’s botched execution, then President Barack Obama announced that the federal government would review the death penalty nationwide and on Thursday Barr said the review had been completed. But in terms of the executions planned for December and January, it is still unclear who the executioners will be and if they have been adequately trained.

Since the federal death penalty was reinstated in 1988, only three inmates have been executed including Timothy McVeigh, the Oklahoma City bomber in 2001. The last person executed by the US government was Louis Jones Jr. in 2003 for the kidnapping, rape and murder Tracie McBride. There are currently 61 inmates on federal death row.

The DOJ has described the five men who are scheduled to die as the “worst criminals,” and all of them were involved in murdering children. First to be put to death on December 9 will be Daniel Lee who was sentenced to death in 1999 for the murder of three people, including an 8-year-old. Next will be Lezmond Mitchell on December 11; he murdered a 63-year-old woman and her 9-year-old granddaughter. Two days later on December 13, Wesley Purka will be executed for the murder of an 80-year-old and the rape and murder of a 16-year-old girl. The following month on January 13, 2020, Alfred Bourgeois will die for the abuse and murder of his two-year-old daughter. Finally, Dustin Honken is scheduled for execution on January 15, 2020 for murdering five people, including 10-year-old and 6-year-old girls.

The DOJ’s rush to resume executions comes at a time when polling reveals that Americans are souring on capital punishment given increasing evidence of racial bias, prosecutorial misconduct, and exonerations of some people who had been on death row, sometimes for decades. New Hampshire and Washington have recently abolished the practice and California announced a moratorium on it earlier this year. After the DOJ’s announcement, Rep. Ayanna Pressley (D-Mass.) introduced a bill that abolishes the federal death penalty, and every Democratic candidate for president has come out against it,.

The United States is one of an increasingly small number of countries that subscribe to capital punishment. “The Trump administration’s decision to restart federal executions after a 16-year hiatus is outrageous,” Amnesty International USA executive director Margaret Huang said in a statement. “It is the latest indication of this administration’s disdain for human rights.”

Donald Trump has long been a proponent of the death penalty calling for the capital punishment for drug dealers and those who kill police officers. So for Robert Dunham, the executive director of the Death Penalty Information Center, the DOJ announcement seemed only a matter of time. “The surprise,” he said, “is that it took this long for them to do something.”