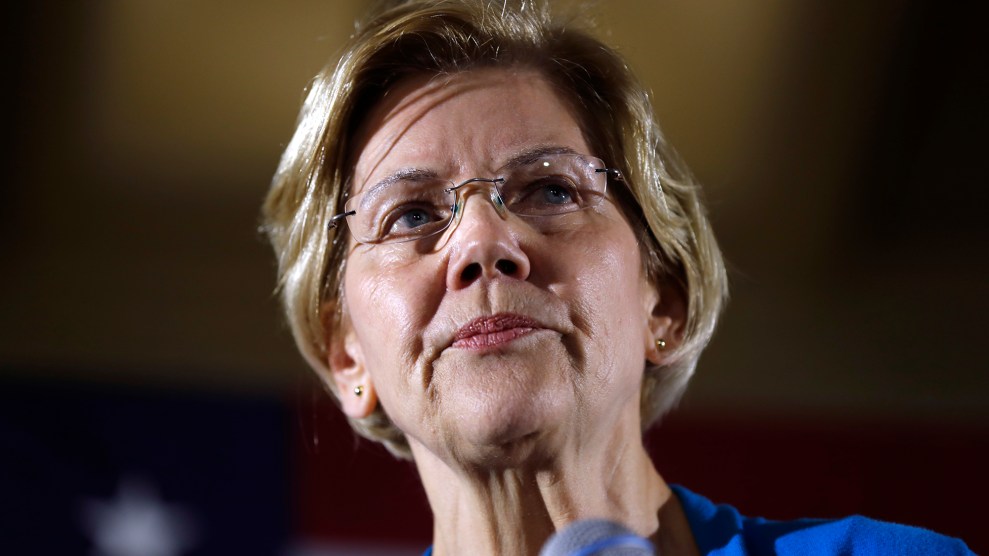 Sen. Elizabeth Warren unveiled a plan Friday to end the government’s relationship with private prisons if she’s elected to the White House. Warren would phase out federal contracts with private prisons, both under the Justice Department and the Department of Homeland Security. She would also pressure state and local governments to stop working with private prison companies by tying the receipt of federal public safety funding to their use of public facilities. “There should be no place in America for profiting off putting more people behind bars or in detention,” Warren wrote in an essay on Medium announcing her plan.

“There should be no place in America for profiting off putting more people behind bars or in detention,” Warren stated.

The proposal comes days before the first Democratic debate of the 2020 presidential race, and adds to a growing chorus among Democratic candidates to curtail or stop the use of private prison companies, which have seen their revenue soar under the Trump administration.

In May, Sen. Bernie Sanders outlined his views on private prisons and detention facilities in an essay for the Brennan Center. He reiterated proposals from the Justice Is Not for Sale Act, legislation he previously introduced that would prevent federal, state, and local governments from contracting with private prison corporations, among other reforms. In recent months, several Democratic candidates, among them Kamala Harris, Pete Buttigieg, and Beto O’Rourke, have more vaguely said they would end federal contracts with prison companies, without outlining a specific plan. Sen. Amy Klobuchar pledged this week to end private prison contracts with the Justice Department but not the Department of Homeland Security.

At the federal level, private detention facilities hold people convicted of crimes and, much more commonly, immigrants awaiting hearings or seeking asylum. During the last few months of the Obama administration—following a major investigation by Mother Jones into a private prison in Louisiana—the Justice Department announced it would phase out its contracts with private prisons in the federal criminal justice system, after the department found they were less safe than public prisons and plagued by oversight problems. The Department of Homeland Security said it would consider following suit in the immigration realm. But after Donald Trump took office, his administration reversed course, arguing private detention facilities were necessary.

The week after Trump was elected, the two biggest prison companies saw their stock prices jump by around a third.

About 126,000 state and federal inmates (8.5 percent of the total) are held in private prisons, and more than 70 percent of ICE detainees are kept in private detention centers. The week after Trump was elected, the two biggest prison companies saw their stock prices jump by around a third. Since then, prison executives have gloated to investors about their prospects for growing profits thanks to the Trump administration’s practice of detaining not just immigrants convicted of serious crimes, but any undocumented person caught crossing the border. “We have 40 percent more beds than before,” says Silky Shah of the Detention Watch Network, an advocacy group focused on reducing immigrant detention. “They are expanding facilities left and right.”

Warren also announced a plan to reduce corporate influence in public prisons, something most other candidates haven’t talked about, according to Kara Gotsch of the Sentencing Project, a criminal justice reform group. Public prisons work with thousands of companies that provide phone, banking, health care, food, and commissary services, among other things. They “come up with extortive schemes to make millions off of the backs of incarcerated people,” Warren wrote, noting incarcerated people are sometimes forced to pay around $25 for a 15-minute call.

She pledged to stop contractors from charging service fees to inmates for health care and phone calls, and to prevent them from gouging prices for commissary or package services. (Sanders’ proposed legislation likewise called for more oversight to prevent companies from overcharging inmates for banking and phone services.) Warren also suggested creating a position within the Justice Department for a “prison conditions monitor” to audit and investigate contractors. “Washington hands billions over to corporations profiting off of inhumane detention and incarceration policies while ignoring the families that are destroyed in the process,” she wrote. “We need to call that out for what it is: corruption.”

“It’s not a small undertaking, quite frankly, given how infiltrated private corporations are in prisons,” says Gotsch of Warren’s proposal.