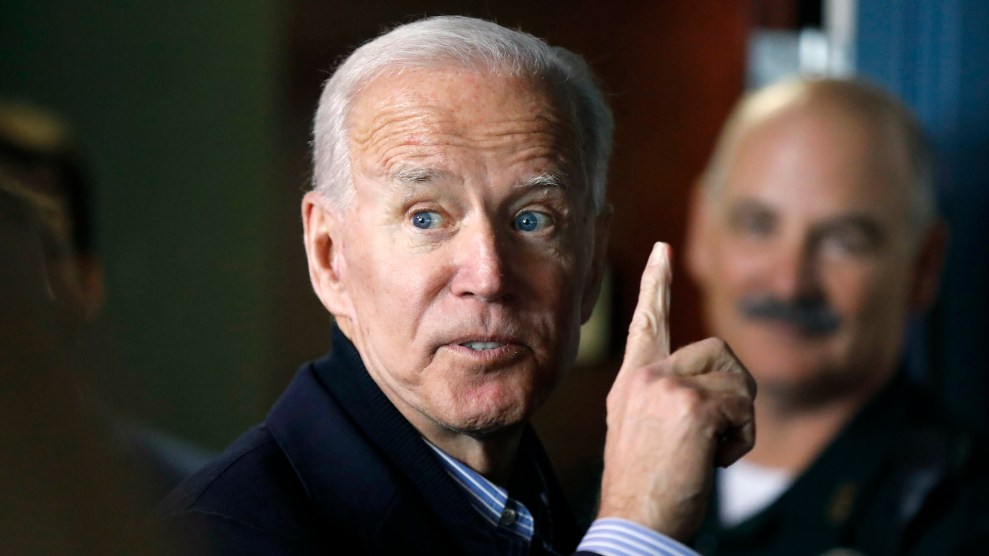 Growing up in South Philadelphia, Carl Upchurch dropped out of elementary school and was first locked up for stealing a bike when he was nine. By 13, he was involved with gangs; in his twenties, he was sent to prison for armed robbery. During his 10-year sentence, Upchurch returned to his education, earning a bachelors degree through the University of Pittsburgh, paying his tuition with federal Pell grants. He’d go on to become an author and a prominent criminal justice activist in the 1980s and 90s, advocating for prisoners’ rights, organizing gang summits, and winning awards from the likes of the Southern Christian Leadership Conference and Jesse Jackson’s Rainbow Coalition.

“Pell grants were one of the best ways for convicts to create their own way out of the vicious cycle of poverty-prison-parole,” Upchurch wrote in a 1994 editorial that urged President Bill Clinton not to sign the sweeping crime bill that had been coauthored and shepherded through Congress by Sen. Joe Biden of Delaware. The bill contained an array of policies: an assault weapons ban, money to hire 100,000 new police officers, the Violence Against Women Act, and billions in funding for states to build prisons if they adopted harsher sentencing laws. Among the bill’s many tough-on-crime provisions was a ban on prisoners receiving Pell grants to pay for college behind bars. “Cutting these grants is politically easy because prisoners don’t vote,” Upchurch wrote. “Now we are forcing prisoners to leave prison no more able to cope with life than when they entered.”

A quarter of a century later, Biden has been beset by criticism of his crime bill as he’s hit the presidential campaign trail. As his signature bill has come under fire from Sen. Kamala Harris (D-Calif.), President Donald Trump, and attendees at his own events, the former vice president has tried to justify it. “You’ve been conditioned to say [the crime bill] is a bad bill,” Biden told a self-described “ACLU voter” in Concord, New Hampshire, last week, after she asked if he would commit to cutting the federal prison population in half. (Answer: no.) At another New Hampshire event last month, he claimed that the crime bill did not “generate mass incarceration,” deflecting blame to the states.

Biden has admitted that certain parts of the crime bill were harmful, like its “three strikes” provision mandating life sentences for some repeat offenders. But he hasn’t commented or publicly reversed his position on one of the clearest-cut examples of the ’94 bill’s harshness: Its ban on Pell grants for prisoners.

Sen. Kay Bailey Hutchinson  said the Pell program had become “a great scam: rob a store, go to jail, get your degree.”

The Pell program, created in 1972 to help low-income students pay for college, was originally open to prison inmates, who could take correspondence courses or receive in-person instruction. Many inmates who wanted the grants got one, because their income was so low while incarcerated. By the 1993-94 academic year, about 23,000 prisoners were receiving grants, on average $1,500 per person for tuition, fees, books, and supplies. The total cost to the federal government was about $35 million—a tiny fraction of $6 billion spent on Pell grants that year, according to a 1994 General Accounting Office (GAO) report.

By the early ’90s, politicians had soured on the idea of using federal dollars to pay for inmates’ college tuition. In 1992, Congress banned prisoners with death or life-without-parole sentences from qualifying for the grants. The next year, as Biden’s crime bill—officially known as the Violent Crime Control and Law Enforcement Act—started to make its way through Congress, Sen. Kay Bailey Hutchison (R-Texas) proposed broadening the ’92 ban to all prisoners. She claimed the Pell program had become “a great scam: rob a store, go to jail, and get your degree.” Rep. Bart Gordon (D-Tenn.) also took up the cause, trumpeting the story of a police sergeant who was mad that his son couldn’t get a Pell grant while prisoners did. “Law-abiding citizens should be fiscally and morally outraged when a Pell grant for a policeman’s child is cut, but a criminal the officer sends to jail can still get a big check,” Gordon told the States News Service.

The idea that prisoners were sucking up college money from more deserving students was based on the falsehood that prisoners could “step to the front of the line” for grants and “push law-abiding citizens out of the way,” in Hutchison’s words. (Everyone who meets the qualifications for a Pell grant receives one.) And prisoners made up fewer than 1 percent of the program’s 4 million total grant recipients, according to the GAO.

Gordon’s amendment to ban all prisoners from receiving Pell grants was approved 312-116 in the House in April 1994 and incorporated into the final version of the crime bill as Biden was moving it through the Senate. The bill was signed by Clinton that September.

The year after the crime bill was enacted, the number of inmates participating in post-secondary education dropped by an estimated 44 percent, according to a new report published by Ithaka S+R, nonprofit that studies higher education. Many of the thousands of prisoners whose access to higher education was cut off also lost the chance for an easier return to life outside of prison: A 2013 meta-analysis by the RAND Corporation found that recidivism rates were 43 percent lower among inmates who participated in correctional education programs, and inmates who participated in these programs were more likely to find a job after release.

Even though a handful of prisoners still tap into other sources of funding for postsecondary education, demand far outstrips access. A report by the Vera Institute of Justice and Georgetown Law School’s Center on Poverty and Inequality found that roughly two-thirds of the state and federal prison population have a high school diploma or GED. But only nine percent of all inmates go on to complete some form of postsecondary education in prison, even though 40 percent say they want it, according to a 2014 Education Department survey.

As national attitudes toward crime and incarceration have shifted, opposition to Pell grants for prisoners has faded. Support for reinstating the grants now unites incarcerated strikers and congressional Democrats—and the Trump administration. Under the Obama administration, the Education Department launched an experimental program that let several thousand prisoners get Pell grants. (Biden appears not to have commented publicly on the decision.) Trump and Education Secretary Betsy DeVos have not only continued that experiment, they’ve expanded it. In May, the Education Department announced that it would allow “new cohorts” of colleges and universities to join the 64 schools that currently enroll prisoners paying tuition with Pell grants.

Since at least 2015, congressional Democrats have sponsored bills to repeal the ban, though it’s never succeeded. Republicans may be getting on board: Sen. Mike Lee (R-Utah) is cosponsoring one repeal effort this year. Sen. Lamar Alexander (R-Tenn.), who opposed the creation of the experimental Pell program in 2015, has said that his education committee would consider eliminating the ban when it discusses reauthorizing the Higher Education Act.

Some of the crime bill’s original supporters have also moved on. Clinton renounced parts of the package in 2015. Gordon has backtracked somewhat on his support for the ban on Pell grants. He told the Marshall Project last year that his proposal was really a reaction to fraud among for-profit schools receiving the federal money.

So far, Biden has not weighed in. His presidential campaign did not respond to a question about whether he supports the prohibition on Pell Grants for prisoners. In his education plan, released in May, the former vice president expresses his support for expanding the Pell program, but incarcerated people aren’t mentioned.