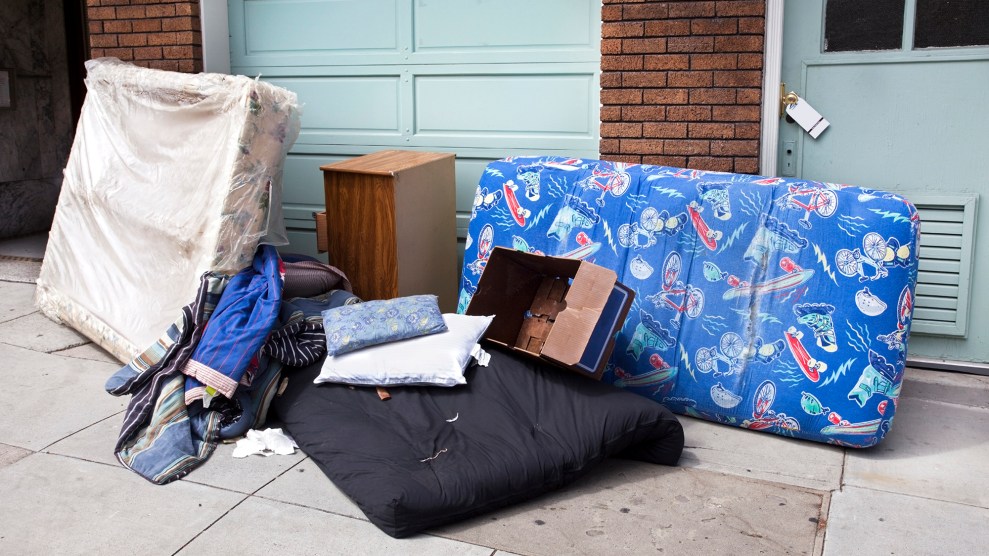 Beverley Somai was afraid of her downstairs neighbor. She first called the police on him because he was playing music so loudly it shook the floorboards of her Bedford, Ohio, apartment. But things escalated last year when he allegedly started following her and her disabled son around town—to the grocery store and the bus stop and back to the apartment building. As the months went on and he continued to follow them, she called the police repeatedly, hoping to make it stop.

In December, Somai, a black immigrant from Guyana, was informed by her landlord that she and her son would soon be evicted because of the phone calls. It was a police decision, really. In Bedford, police officers regularly force landlords to evict tenants who are deemed a “nuisance”—a label that, according to the town’s nuisance property ordinance, applies to someone if two or more perceived illegal activities take place on or near their property within a year. But in many cases, police simply consider two or more 911 calls as grounds for eviction. Which means that renters like Somai can find themselves on the streets simply for asking for help.

Renters can find themselves on the streets simply for asking for help.

Over the past few decades, hundreds of municipalities in at least 35 states have enacted versions of nuisance ordinances, from New York to California. Supporters of the measures argue that repeated 911 calls drain police resources, and that landlords should be more responsible for bad behavior on their properties. According to some ordinances, like Bedford’s, landlords who don’t evict when asked can be fined hundreds of dollars or jailed if the nuisance activity continues.

But critics say these laws punish people who need help. A majority of Bedford’s nuisance letters over an 18-month period were sent in response to domestic violence. Last year, a mom’s apartment was deemed a nuisance after she called the police because her child was being beaten by his father. Another landlord in town was fined $250 because her tenant called for help with a suicidal boyfriend. Ohioans elsewhere have been labeled nuisances for calling for help with opioid overdoses or to threaten self-harm. The laws also disproportionately affect people of color, who are more likely to be targeted by the police. “In a lot of cases they are not actually committing any crimes,” says Sara Bird, a lawyer at the Legal Aid Society of Cleveland who is helping sue Bedford on Somai’s behalf, asking the town to scrap its policy. “It’s really the crime of being black in a city that doesn’t want you there.”

Bedford’s nuisance ordinance emerged during a major shift in racial demographics. In the early 1990s, the town was almost exclusively white, and many residents were middle-class homeowners. That changed as black families from Cleveland began to move to the suburb, mostly to rent homes. By 2010, the town was about 40 percent black, and today it’s majority black. The mayor and city council, meanwhile, are all white, and the police department is almost all white.

“It’s really the crime of being black in a city that doesn’t want you there.”

In 2005, as more black families were moving in, a resident at a City Council meeting asked how the town planned to deal with the “mixture of the community.” Dan Pocek, then the mayor, said he supported diversity but wanted to protect “middle-class values” and make people feel safe, and that he hoped to stop “predominantly African American kids who bring in that mentality from the inner city.” “We believe in neighborhoods, not hoods,” he was reported as saying in minutes from the meeting. The all-white City Council voted unanimously that year to adopt the nuisance ordinance.

Later, police sent a nuisance citation to the landlord of a black grandmother whose teenage grandson was caught walking outside after curfew. In other towns, people have been cited because kids were playing basketball in the street outside their homes.

Somai, who came to the United States more than two decades ago, argues in her suit that the ordinance was enacted to discriminate against renters of color and is disproportionately enforced against them. The argument has been made elsewhere, too. In Peoria, Illinois, where a fair housing group is also suing over a nuisance ordinance, homes in predominantly black neighborhoods are two times likelier to be cited as nuisances than those in predominantly white ones, even when controlling for factors like neighborhood income and the percentage of people who rent.

Somai’s suit also argues that the ordinance discriminates against women by disproportionately punishing survivors of spousal or familial abuse. From January 2016 to July 2017, the city of Bedford issued 47 letters urging landlords to “abate”—or evict—tenants deemed nuisances, and more than half those letters were sent in response to domestic violence. “If you have two calls out for domestic violence, that warrants an eviction instead of getting this tied up in courts and assessing taxes that take forever,” a resident said at a City Council meeting in 2005, the year the ordinance was enacted.

Critics argue that nuisance ordinances encourage landlords to downplay their tenants’ problems. “We suggested she obtain a gun and kill him in self-defense, but apparently she hasn’t,” a landlord in Milwaukee wrote to the police after a woman called 911 for help, according to Matthew Desmond’s book Evicted, which examines nuisance ordinances in that city about a decade ago. “Therefore, we are evicting her.” In Euclid, Ohio, after a woman ran to a neighbor, bleeding, and asked him to call the police on her abusive boyfriend, the city deemed her property a nuisance, writing that she was “involved in a pattern of behavior that is disruptive to her neighbors and places an undue burden on the resources of the Euclid Police Department.” The police also described some of the violence she faced as “boy/girl trouble.”

Some towns make exemptions to ensure survivors of abuse aren’t evicted, but many don’t—including about half of the Ohio towns with nuisance ordinances, according to a comprehensive study by Cleveland State University researchers in 2017. In two New York towns, 38 to 48 percent of nuisance incidents, whether warnings or evictions, were triggered by domestic violence, according to a 2015 report by the American Civil Liberties Union; in a study of Milwaukee in 2008 and 2009, nearly a third were. In Fairlawn, Ohio, almost every single nuisance letter from 2015 to late 2016 was. In a St. Louis study in 2016, women said they were threatened with eviction after reporting they had been attacked with knives, sexually assaulted, stalked, and kidnapped.

As a result of these ordinances, fair housing groups say crime victims might not call for help when they need it. In 2012, Lakisha Briggs, a mom in Norristown, Pennsylvania, didn’t dial 911 after her boyfriend stabbed her in the neck with a glass shard because she had been threatened with eviction after previous calls. (She and her young daughter received an eviction notice anyway after a neighbor called emergency assistance on their behalf, according to court documents.) “The Nuisance Ordinance does not further any public safety goals or any other legitimate governmental interests,” attorneys for the Legal Aid Society of Cleveland and the ACLU wrote in the lawsuit against Bedford. “To the contrary, by penalizing victims of crime and other people who seek emergency assistance, the Ordinance deters calls for help and crime reporting, thereby harming public safety.”

After Beverley Somai got the eviction letter from her landlord, she struggled to sleep at night and found herself crying regularly. She worried what an eviction might mean for her adult son, who lived at home because of his disabilities and was months away from his school graduation, or whether it might jeopardize her Section 8 housing voucher, which helped her cover the cost of rent. As her eviction hearing loomed, she took the picture frames off her walls and put them into big garbage bags. She packed her belongings into boxes and lined them up along the hallways.

She filed the lawsuit days before the hearing, with help from the Legal Aid Society of Cleveland. The suit argues that the nuisance policy violates the Fair Housing Act, the due process clause, and the First Amendment by punishing people who ask the government for assistance. There’s some precedent on her side: ACLU lawsuits in Missouri, Arizona, and Pennsylvania have made similar claims and convinced some cities to repeal or amend their nuisance ordinances. But even in these states, the fight isn’t over, since previous settlements only bind the involved jurisdictions. “Many municipalities are unaware of the legal violations that ordinances can present,” says Sandra Park of the ACLU Women’s Rights Project. The city of Bedford has not yet filed a response to the lawsuit and declined to answer questions for this story. “The City is not in a position to comment do [sic] to the litigation,” an attorney for the city wrote to Mother Jones.

Somai is still living at her home while she waits for a resolution. Thankfully, she tells me, her downstairs neighbor moved away after he was also threatened with eviction. But she wonders what might happen if she ever needed to call the police again for something else. After she sued, her landlord dismissed her own eviction case “without prejudice,” meaning it might be reopened in the future. She’s taken the picture frames out of the garbage bags and put them back on the walls: But “I still have the bags lying around, just in case.”