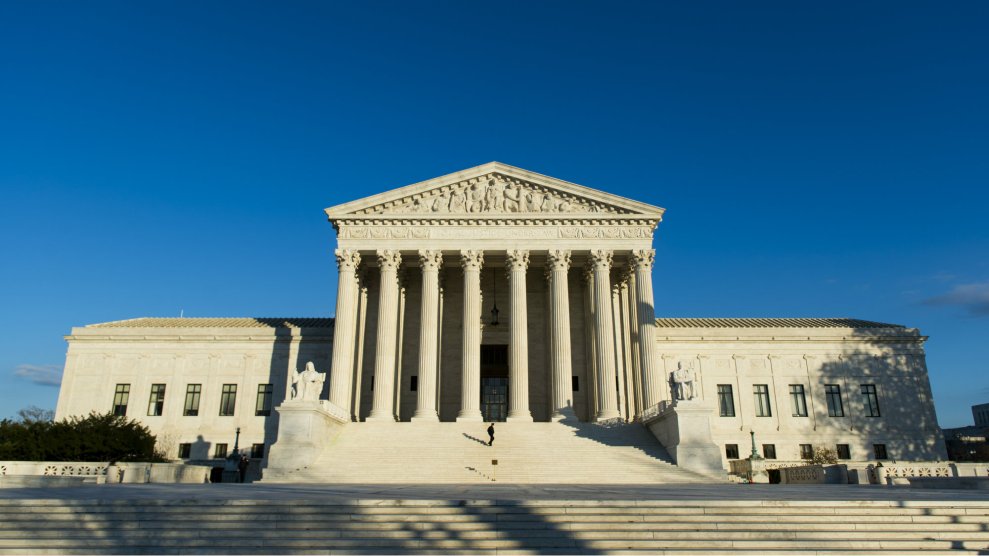 Keith Tharpe, a black Georgia death row inmate, was sentenced to death in 1991 for the kidnapping and murder of his estranged wife’s sister-in-law Jaqueline Freeman. At trial, Barney Gattie, a white juror, sentenced Tharpe to death in part because he believed that there were two types of black people—”regular black folks” and “niggers”—and Gattie thought Tharpe was the latter and deserved to die. Nearly 30 years later, no court has ever heard Tharpe’s claim of juror bias. After several unsuccessful attempts in the lower courts, his case finally reached the Supreme Court. But on Monday, the high court declined to hear his case.

“Today’s decision from the US Supreme Court takes giant steps backwards from the Court’s longstanding commitment to eradicating the pernicious effects of racial discrimination,” Marcy Widder, a lawyer for Tharpe, said in a statement after the ruling. “What happened in Mr. Tharpe’s death penalty case was wrong.”
In February, Mother Jones reported on the racist juror at the center of this case:

One of the white jurors on the case may have voted for the death penalty because Tharpe is black. According to court documents, Barney Gattie, a white juror, said he believed there were two types of black people: “regular black folks” and “niggers.” The victim, in Gattie’s opinion, was black, but Tharpe was a “nigger.” He told one of Tharpe’s lawyers that this distinction factored into his decision on whether to vote for death. Although this raises serious questions about racial bias in cases involving capital punishment, no court has ever examined Tharpe’s claim.

There were no dissents in the court’s decision, but Justice Sonia Sotomayor wrote in a concurring statement that while she was “profoundly troubled by the underlying facts of the case,” the high court’s decision was based on the procedural issue,  which focused on the way that the juror bias claim had to be raised in a timely fashion. This repeatedly has kept Tharpe from receiving his day in court. As Mother Jones reported last month, Tharpe’s case had been plagued by procedural rulings:

Then, in 2007, the state appeals court held hearings about an intellectual disability claim but did say this about the juror bias claim: “[T]he fact that some jurors exhibited certain prejudices, biases, misunderstandings as to the law, or other characteristics that are not conducive to neutral and competent fact-finding is not a basis for impeaching the jury’s verdict.”

Finally, in 2010, Tharpe’s case made it to the 11th Circuit. It ruled that the state’s previous ruling on his juror claims could stand because he hadn’t raised the claim early enough. In other words, the delay prevented Gattie’s racial bias from being taken into consideration.

Tharpe’s attorneys appealed, and the day he was supposed to be executed, September 26, 2017, the Supreme Court issued a last-minute stay and remanded the case back to the 11th Circuit for reconsideration. In 2018, the federal court once again denied the defendant, saying he was barred from raising the claim.

Now that the US Supreme Court has declined to hear his case, the state of Georgia can schedule an execution date for Tharpe. “Allowing Mr. Tharpe’s death sentence to stand is an affront to the fairness and decency to which we, as a society, should aspire,” Widder said. “True justice would not permit the State of Georgia to execute Mr. Tharpe on the basis of this record.”