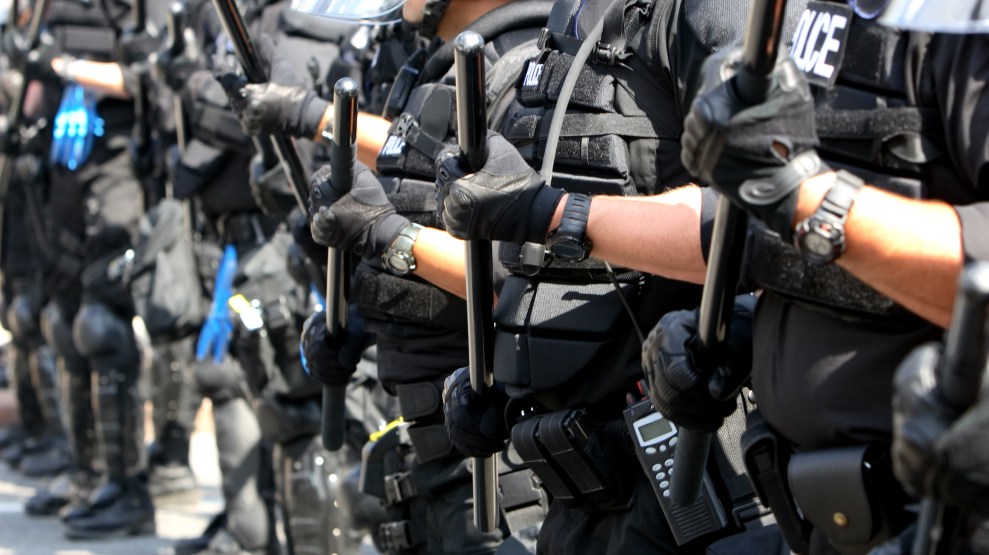 For decades, when it came to releasing records related to police officers’ conduct, California was among the least transparent states in the country. That was supposed to change a few weeks ago. Last August, the state legislature passed a law that made it easier for the public to obtain police records relating to shootings involving officers, severe use of force, and confirmed cases of sexual assault and lying. But even before the law, known as SB 1421, went into effect on January 1, police unions began a legal effort to prevent any disciplinary records and personnel files created before 2019 from being released. As many as 20 lawsuits over the law’s meaning are now moving through the state courts, with cops facing off against journalists and civil rights groups over what the new law really means.

SB 1421 was among a slate of criminal justice reform bills signed into law by then-Gov. Jerry Brown last summer. Its passage followed a wave of activism sparked by the death of Stephon Clark, an unarmed black man who was shot and killed by a police officer outside Sacramento in March 2018. Along with a bill that requires the release of officers’ body camera footage of deadly shootings or use of force incidents, SB 1421 signaled a shift toward increased transparency.

“There was more urgency felt by legislators as well as the public to actually take action,” says Melanie Ochoa, a lawyer at the American Civil Liberties Union of Southern California, which is fighting a suit over the law filed by the Los Angeles Police Department’s union. “The public has long wanted something like this. There were 150 different organizations that signed on in support, and only 14 who opposed, all of whom are law enforcement.”

Law enforcement unions claim that the new law does not apply to records created before 2019, and they have obtained temporary restraining orders and preliminary injunctions blocking several local police departments from releasing any older records. “Our goal is to protect our members’ privacy rights in incidents that occurred before this law went into effect,” Grant Ward, the president the San Bernardino County Sheriff’s Employees’ Benefit Association, said in a statement after a court issued an order blocking the release of files. “We have a strong legal position that the bill shall not be applied retroactively.”

Advocates for disclosure say that exempting records from before 2019 would effectively cripple the law. The police unions, Ochoa says, are seeking to “undermine any movement towards accountability. And they have no legal basis for doing so.”

The police unions, Ochoa says, are seeking to “undermine any movement towards accountability. And they have no legal basis for doing so.”

Amid these legal battles, the new law’s implementation has been uneven. “It looks like a hot mess,” says Lara Bazelon, a law professor at the University of San Francisco who studies criminal justice. “It turns on where you live, and what the position of your local police department is, and what the position of their union is, and whether there’s ongoing litigation and whether the trial court judge has issued a temporary restraining order.” After the ACLU of Northern California and the local news site Berkeleyside filed a suit against Berkeley, its city council voted to begin releasing records predating January 1.

SB 1421 has already gotten some results. Under the new law, the Mercury News and KQED public radio obtained records showing a pattern of misconduct by an officer in Burlingame who had been fired for soliciting sexual favors from women he’d arrested. Prior to his termination last March after a woman filed a complaint, two other women had reported him for similar behavior. The district attorney’s office had declined to file charges based on the incident last year, but said that it had been unaware of the previous cases until the news organizations recently reported on them. San Mateo CountyDistrict Attorney Steve Wagstaffe said he is now considering reopening a criminal investigation.

Until recently, California was one of three states with laws that make police personnel records confidential, and the only state where even prosecutors could not directly obtain cops’ disciplinary files. This secrecy dates back the the 1970s, when the Los Angeles Police Department shredded more than four tons of personnel records, leading to the dismissal of more than 100 criminal cases involving officers accused of past wrongdoing. In 1978, lawmakers passed a law that required records relating to citizen complaints be maintained for five years while also shielding those records from public disclosure.

“California has one of the most secretive systems in place,” Bazelon says. “It is extremely difficult to get any kind of information about police officers that tend to suggest that they’re not credible.” Prior to the bill’s passage, Ochoa explains, police disciplinary records were only obtainable through a Pitchess motion, a complicated process that often yields little information.

Earlier attempts to increase transparency and access to police discipline records consistently failed in the face of strong opposition from law enforcement unions. An effort in 2007 failed after dozens of officers testified that opening personnel records to public scrutiny would endanger their lives, though the police unions were unable to name a single case where such disclosure had led to an officer being harmed. A bill similar to SB1421 was killed in committee in 2016.

Police unions have long argued that sealing off personnel records protects officers’ privacy and safety. Jacob Kalinski, an attorney at Rains, Lucia, Stern, St. Phalle & Silver, which represents a several law enforcement unions in the current litigation, says the release of files predating the January 1 implementation date would be unfair to police officers who had believed their personnel records would remain private: “If you apply this law retroactively, what you’re saying is that the expectations that you had, they don’t matter. And that’s fundamentally unfair.”

In December, the San Bernardino County Sheriff’s Employees’ Benefit Association filed two motions with the state Supreme Court, requesting a ruling on whether the new law applied retroactively to documents dated before 2019, and asking for an immediate stay for all law enforcement agencies in the state from releasing any earlier records. In its suit, the union argued that the law was not expressly written to apply retroactively, and that any documents that predate the law should remain confidential. The state Supreme Court declined to take up the case, and the union refiled the case in a state superior court, obtaining a temporary order preventing the retroactive release of San Bernardino County’s records.

Last week, state Sen. Nancy Skinner, who authored the disclosure law, sent a letter to the Senate Rules Committee seeking to clarify its intent, noting that it should apply to all existing records regardless of when they were created. “It is my understanding in enacting SB 1421 that the change in the law applies to all disclosable records whether or not they existed prior to the date the statute went into effect,” Skinner wrote. “This is the standard practice for public records legislation in California.”

In a statement to Mother Jones, Skinner noted that the LAPD’s union, in a letter opposing SB 1421 last year, said that it understood the bill to be retroactive. “This demonstrates that the police unions now suing understood that SB 1421 was intended to cover all records,” Skinner said.

So far, there’s no indication that legislators will try to amend the law to clarify its intent. And Skinner’s letter won’t stop the litigation making its way through the court system. Assuming the lower courts’ rulings will be appealed, it will likely fall to the state Supreme Court to weigh in on the law’s ultimate meaning.