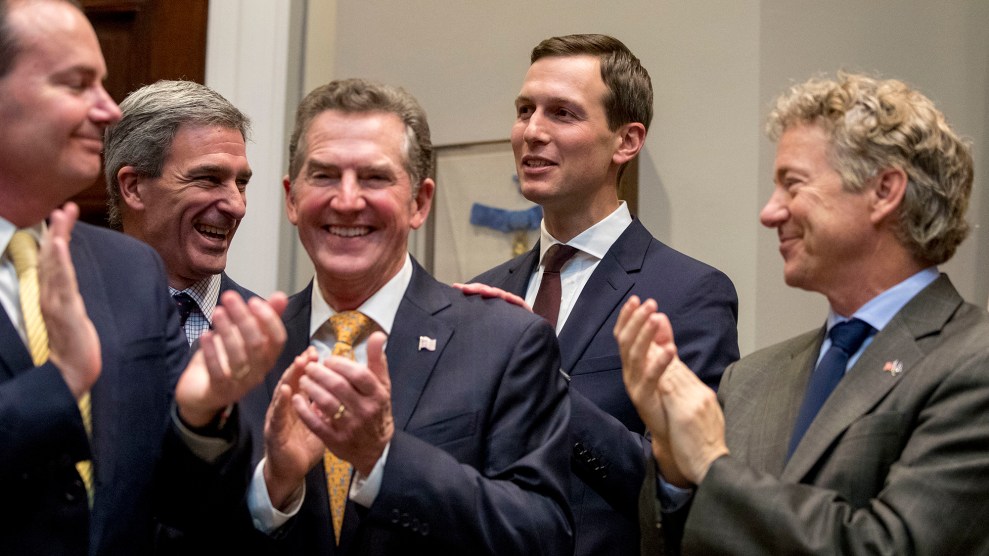 In a rare bipartisan victory, the Senate overwhelmingly passed legislation Tuesday night that seeks to reduce the federal prison population.

The First Step Act was approved in an 87-12 vote and will now go to the House, where it is expected to pass. President Donald Trump has said he will sign the measure, which would be the first major criminal justice bill to become federal law in about eight years. “This will keep our communities safer, and provide hope and a second chance, to those who earn it,” he tweeted.

Among the bill’s biggest impacts is the measure to retroactively reduce a major disparity between crack and powder cocaine sentences, allowing roughly 2,600 prisoners to petition for quicker release, the majority of them people of color. The bill would also curb some mandatory minimum sentences, reducing the federal three-strikes penalty for drug felonies from life in prison to 25 years. And it would give federal judges more discretion to avoid handing down mandatory minimums to people with limited criminal histories, which could help an estimated 2,000 people annually.

“It’s a Christmas miracle brought on by people’s power, and I hope progressives will celebrate it,” Van Jones says.

In addition to sentencing reform, the bill would encourage some prisoners who participate in rehabilitative programs to spend more of their sentences in halfway houses or home confinement. It would make more elderly and sick inmates eligible for compassionate release, and it would clarify that federal inmates can earn more time off their sentences each year for good behavior. It would ensure prisoners are not held beyond 500 miles from their homes, allowing them to stay closer to their families, and it would prohibit prisons from shackling pregnant inmates.

With backers ranging from the American Civil Liberties Union to the Koch brothers, the First Step Act involved concessions on both sides of the aisle. Democrats had hoped the curbs on mandatory minimums would be made retroactive, for instance, while some Republicans worried the bill would make them appear soft on crime. Senate Majority Leader Mitch McConnell, after initially dragging his feet on the measure, agreed to bring the bill up for a vote only after amendments were added to appease some conservative lawmakers, including Sen. Ted Cruz (R-Texas): One amendment gave judges slightly less discretion to hand down shorter sentences. Another amendment excluded more offenders from early release. “It is a compromise of a compromise,” Sen. Kamala Harris (D-Calif.) said in a statement Monday announcing her support for the bill. “We ultimately need to make far greater reforms if we are to right the wrongs that exist in our criminal justice system.”

The Senate just passed the First Step Act, a bipartisan prison and sentencing reform bill that I supported. It includes important changes, but we've still got a long way to go. I'll keep fighting for a criminal justice system that delivers on the promise of equal justice for all.

On Tuesday, the Senate defeated other amendments put forward by Sen. Tom Cotton (R-Ark.), an opponent of the legislation who described it as a “jailbreak that would endanger communities.” He unsuccessfully proposed changes that, among other things, would have prevented a long list of prisoners from getting more time in halfway houses after participating in rehabilitative programming.

There is not a single benefit in the bill for the victims of these criminals.

Supporters of the bill say Cotton’s fears of a “jailbreak” are overblown. As I previously reported:

The number of prisoners who could see shorter sentences for crack cocaine (about 2,600) or who could be released right away for good behavior (about 4,000) is relatively small when you consider that more than 1,700 people are released from US prisons every single day, notes Keith Humphreys, a Stanford psychiatry professor who writes about criminal justice for the Washington Post: “The First Step Act would be equivalent to having about three or four extra days of prison release during the year that the law passes, with even smaller effects from then forward. And almost none of the inmates released early would have committed violent crimes.”

While a limited number of inmates would be released quickly as a result of the legislation, Van Jones, co-founder of the advocacy group #cut50 and a backer of the bill, says it’s important not to discount the ways it will improve life for the 181,000 or so people serving time in federal prisons, including by allowing more of them to be closer to their families. “It’s a Christmas miracle brought on by people’s power, and I hope progressives will celebrate it,” he says.

“It’s not everything we want,” adds Kara Gotsch of the Sentencing Project, an advocacy group. But “it’s progress, and that’s what we have to keep in mind.”