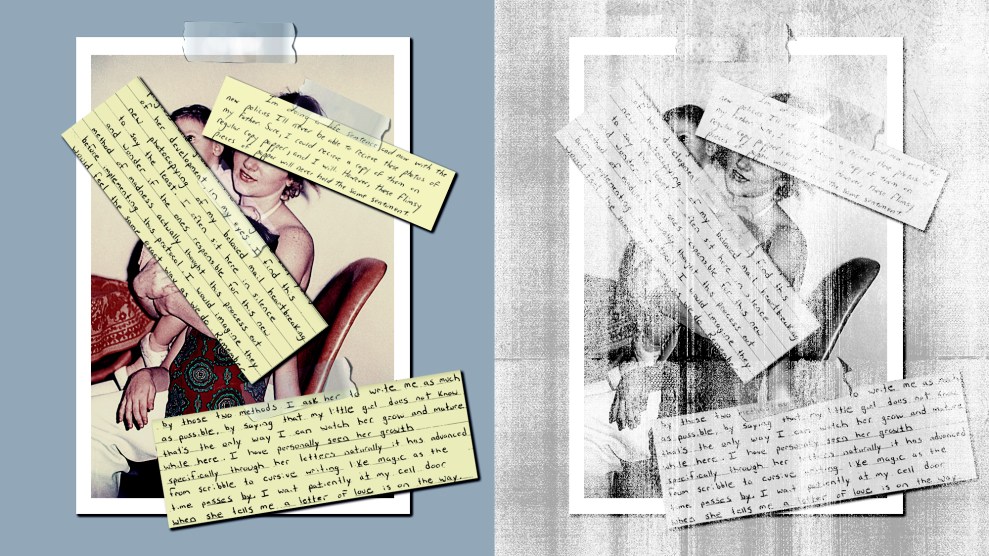 Ever since his daughter first learned to use a pen, Joseph Onzik has looked forward to her letters. He reads them from a cell in a state prison in Pennsylvania, where he’s been locked up for about five years, since she was three. “I ask her to write me as much as possible,” he says. It “has advanced from scribble to cursive writing like magic as the time passes by.” Sometimes she calls to let him know what color pen she’ll use for the next one: “At eight years old, it is quite hard for her to keep a secret about the little things in life.”

But this ritual changed in September, when Pennsylvania’s Department of Corrections announced that because some letters had been soaked with liquid drugs, inmates in state lockups would no longer receive mail directly from friends and family members. Now their mail goes to Smart Communications, a company in Florida that scans the letters and stores them electronically. At mail call, inmates receive printout copies rather than the originals.

“I find this new photocopying of my beloved mail heartbreaking to say the least,” one prisoner said.

With the new change, prisoners say the letters now feel less personal, and scanned photos are sometimes impossible to make out. Families also have privacy concerns about a company handling their correspondence. In recent interviews with Mother Jones, the Department of Corrections and Smart Communications appeared to disagree on how long digital copies of their letters would be stored in a database that could be used by law enforcement for investigative purposes. The company said it would hold onto the copies for many years longer than state officials suggested.

As the winter holidays approach, prisoners are missing the handwritten letters they once received. Some complain of mishaps like lost pages and long delays. Others say the printouts are of such poor quality that letters are difficult to read. When photos arrive—sometimes reduced in size to fit multiple on a page—they can be so distorted that faces are hard to distinguish. And at the end of the day, a printed copy of a card just doesn’t feel the same as the real thing. “Please remember this is the only method and way to watch her progress and grow in life during the best years of her development,” Onzik said of his daughter’s letters in a message sent to an advocacy group in October and shared with Mother Jones. “I find this new photocopying of my beloved mail heartbreaking to say the least.” Another inmate got married two days before prisons stopped processing mail directly; when his wife sent him their marriage license, according to the Philadelphia Inquirer, it arrived as a double-sided photocopy.

Corrections officials say the new policy was a response to drastic circumstances. The month before it was announced, an unusual number of inmates had overdosed on drugs. Dozens of prison staffers also became sick after handling prisoners’ mail or property—tingling hands, headaches, and dizziness—and many were hospitalized. The corrections department attributed the problem to synthetic cannabinoids like K2, which are potent and hard to detect when soaked into paper. In response, the state’s 25 prisons went on lockdown and rolled out a series of restrictions: They temporarily banned volunteer groups from sending free books to inmates, installed body scanners, and put a 90-day moratorium on vending machine purchases in visitation areas to ensure that drugs would not be slipped into chip bags and passed along. Most mail would be digitized by the company in Florida, while legal correspondence would be photocopied onsite by prison staffers, who would temporarily keep the original documents and hand over duplicates to inmates. (The American Civil Liberties Union is now suing over this handling of legal mail, arguing it violates attorney-client privilege.)

Family members upset about the changes have questioned whether the restrictions are misdirected, noting that guards sometimes sneak contraband into correctional facilities. And some toxicologists have cast doubt on whether inmate mail was really sickening prison staffers in the first place, suggesting that their symptoms could have been psychosomatic, the result of anxiety about drug exposure as opposed to actual exposure. But within a month of implementing the new mail policies, the Department of Corrections says, drug finds in Pennsylvania state prisons dropped nearly in half. Other state corrections systems began calling to express interest in the new security protocols, according to a department spokeswoman.

Still, advocates worry prison officials aren’t considering the full impact on inmates. Writing letters is one of the most popular ways for them to stay in touch with relatives, in part because of the hefty price tag for phone calls. And studies show that those who maintain ties with their family are more successful after their release. “It’s not like the intentions are bad, so we want to make sure people understand what the cost is to families,” says Kevin Ring, who spent time in a federal prison in Maryland in 2014 for his part in a lobbying scandal and now leads the advocacy group FAMM, which collected messages from Pennsylvania inmates like Onzik who are upset about the mail policy. During his incarceration, Ring kept color photos of his daughters in his locker to boost his morale. “That mattered. To get some grainy copy of a picture is not the same,” he says.

Studies show that those who maintain ties with their family are more successful after their release.

Pennsylvania isn’t the first state to ban direct mail to inmates. In Arkansas and Virginia, state prisons began photocopying letters last year, also to stem the flow of drugs inside. But Pennsylvania’s corrections department is reportedly the first to outsource its mail processing to a company that stores inmate correspondence in a database. And it will likely not be the last. Smart Communications already works with dozens of lower-level agencies like counties that run jails; it’s now in talks with about half a dozen other state corrections departments about its services, according to CEO Jon Logan, who notes that revenue has doubled almost every year since the company launched in 2009. It has three patents pending on its mail technology. “I expect it to be the standard in corrections going forth,” he says. The contract with Pennsylvania is worth $376,000 a month, or nearly $16 million over three years.

The company says it can process mail more efficiently and safely than correctional staffers because its employees have special equipment to avoid contact with drugs. And it says its method of storing electronic copies of letters can be useful for investigative purposes. “If there is gang activity, secret communications about an escape, or drugs in the community—now all communications are being documented, so the investigators can look at it even after it’s been delivered to the inmate,” says Logan.

Amy Worden, a spokeswoman for the Department of Corrections, told Mother Jones that Smart Communications would store the original letters and electronic copies for 45 days, a timeline that’s also outlined in an FAQ on the department’s website. But Logan told Mother Jones that his company would hold onto electronic copies of Pennsylvania mail much longer—for at least seven years after a prisoner is freed, he told me. “That is correct. 7 years from the time the inmate has been released,” he reiterated in an email later when I got in touch to double-check how long Pennsylvania mail would be stored, noting that other time frames had been reported. “To be honest [in] almost 10 years of business Smart Communications has never lost or deleted records or any data from our database. There are hundreds of millions of data records stored for investigators at anytime.”

Pennsylvania’s corrections department is reportedly the first to outsource its mail processing to a company that stores inmate letters and photographs in a database.

Some inmates aren’t taking any chances. “I won’t send any pictures to him that have faces of our children, our grandchildren,” says Dana Cooper, whose husband is incarcerated at SCI Phoenix in Pennsylvania. “He wants no family faces saved in that database whatsoever.”

At a community meeting in October, Pennsylvania Corrections Secretary John Wetzel reportedly acknowledged that the new mail system wasn’t perfect, but said it was necessary to keep prisons safe and better than other options his agency considered, including limiting mail to postcards. The department has also tried to address complaints about lags in delivery time: Smart Communications hired dozens of extra employees and ordered six mail scanners to speed up processing for Pennsylvania, with the aim of delivering copies to inmates within 48 hours. The company says its scanners are some of the highest quality available on the market.

But it’s little consolation to inmates like Thomas Simone, a 34-year-old at SCI Retreat. He recently wrote to FAMM about how the mail policy affects him. “Two years ago my father died,” he wrote. “My father was my best friend and I took his passing really hard. After he past my sister offered to send me a lot of my fathers personal photos…I’m doing a life sentence and now with the new policies I’ll never be able to receive these photos of my father. Sure, I could receive a copy of them on regular copy papper, and I will. However, these flimsy pieces of paper will never hold the same sentiment. That is by far the way these new policy changes have hurt me the most.”

Read Onzik’s and Simone’s letters below, courtesy of Celeste Trusty of FAMM: