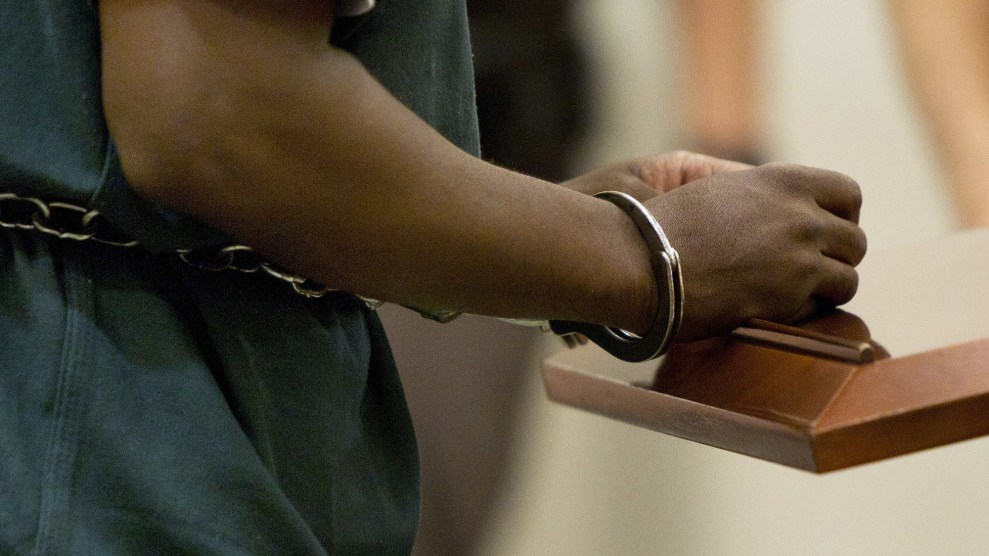 A juvenile lifer in Michigan wears handcuffs as he appears for his resentencing hearing at the Kent County Courthouse in Grand Rapids in September 2016. Cory Morse/The Grand Rapids Press via AP

Kevin Boyd distracts himself these days by running 10Ks around the track. Or he’ll spend hours listening to rock and roll while working in the greenhouse. It’s been more than two decades since he was sentenced to life in prison in Michigan after being charged with helping his mom murder his dad when he was 16. Boyd was behind bars before he could even vote, with no chance of parole.

An opportunity to break out of the monotony seemed to arrive in 2016: The Supreme Court declared that about 2,600 juvenile lifers like Boyd should get a shot at freedom. The justices argued that most of their life-without-parole sentences were too harsh because they were just kids when they committed their offenses and their brains weren’t fully developed. Lower courts, the justices added, should consider granting them parole hearings or shortening their prison terms. But different states dealt with the ruling in different ways; in Michigan, now home to the biggest population of juvenile lifers in the country, Attorney General Bill Schuette has largely resisted their release, and the vast majority continue to wait for judges to resentence them.

Now, Schuette is running to become the state’s next governor—meaning his seat as its top prosecutor is open and his docket of lifer-related cases will soon be in someone else’s hands. As the midterm elections approach, lifers in Michigan are wondering whether the tide may turn in their favor again.

The Democratic candidate for attorney general, Dana Nessel, is an openly gay lawyer who supports second chances for juvenile lifers. Her opponent, Republican state House Speaker Tom Leonard, is a Trump supporter who’s friends with conservative provocateur Ted Nugent and voted for legislation that tried to keep many lifers locked up. Their race is tight—in a September poll Nessel was leading by 6 percentage points, and a survey in October showed her extending that lead over Leonard by 3 more points. Their competition revolves mostly around other issues like how they would handle the Flint water crisis, their views on reproductive rights, and the extent to which they would sue the Trump administration.

When the Supreme Court made its last ruling on life without parole for teens in 2016, roughly 6 in 10 lifers nationally were African American.

But for juvenile lifers like Boyd, the outcome could be hugely consequential. While the attorney general doesn’t usually make individual resentencing recommendations, its office is involved in a series of lawsuits concerning these cases, including class actions. These lawsuits may not resolve anytime soon, which means the next attorney general will likely play a role in how they turn out, says Deborah LaBelle, a lawyer with the American Civil Liberties Union who represents lifers. “So the question is whether the attorney general will be rational about this or whether he or she will continue to fight a fair chance and implementation of the US Supreme Court rulings.”

When the Supreme Court made its last ruling on life without parole for teens in 2016, roughly 6 in 10 lifers nationally were African American. Many of them had been locked up during the “superpredator” panic of the 1990s, when lawmakers pushed through mandatory sentencing schemes and prosecutors portrayed teen criminals, especially black boys, as dangerous adults who required serious punishments. The justices argued that life-without-parole terms for teen offenders were unconstitutional in almost all situations, but they gave states leeway to decide how to review lifers’ cases, leading to vast disparities. In Pennsylvania, many juvenile lifers have been freed because a judge there ruled they should get a chance at release unless prosecutors can “prove beyond a reasonable doubt” that they will never be rehabilitated. In Michigan, on the other hand, prosecutors have argued that nearly two-thirds of juvenile lifers—more than 200 of them, including Boyd—should be kept in prison for good.

Their odds of leaving prison could hinge partly on the outcome of an ongoing lawsuit. In June, the Michigan Supreme Court ruled as part of the case that judges in the state would not be held to the same standard as those in Pennsylvania; according to the order, Michigan judges don’t need to determine that a person is “irreparably corrupt” in order to hand down no-parole life terms, so long as mitigating factors like age or family background are considered. The ACLU plans to appeal, and the next attorney general will be tasked with responding.

Neither candidate has publicly commented specifically on that case. As a former prosecutor in Wayne County, Nessel helped put some juvenile lifers behind bars, but she has since worked as a civil rights and defense attorney, largely for poor clients, and says she supports second chances. “The [US] Supreme Court was pretty clear in its assessment that only in rare cases should a juvenile lifer be denied the opportunity at resentencing,” she told Mother Jones, adding that the state attorney general wasted valuable resources resisting that order. “People are capable of being rehabilitated.” The state’s Republican Party recently referred to Nessel as “Dangerous Dana” in a campaign ad because of her work as a defense attorney.

Leonard, the Republican candidate, did not reply to requests for comment. He also has experience as a prosecutor, in Genesee County, where he says he put “some of Michigan’s worst criminals behind bars.” In 2014, Leonard voted for a bill that allowed teens to be sentenced to life without parole, even after the Supreme Court ruled in 2012 that mandatory life-without-parole sentences were unconstitutional for them. (The law initially denied current juvenile lifers a chance to seek resentencing, until the court mandated in 2016 that they could do so.)

Republican AG candidate Tom Leonard is a Trump supporter who has voted for legislation that tried to keep many lifers locked up.

One of the top donors to Leonard’s campaign is the Michigan Values Leadership Fund, a political action committee led by former state lawmaker Alan Cropsey, who reportedly refused to let a bill that would have abolished life without parole for children out of the Senate Judiciary Committee, which he chaired, for a vote. In 2006, after the United Nations blasted the United States for sentencing kids this way, Cropsey described the international body as “a laughingstock” with “no moral credibility.” He said juvenile lifers were often too dangerous to get a second chance. “This is not a social work system for this poor misguided soul,” he said. “That poor misguided soul killed a person—killed them in cold blood.”

If Leonard is elected, says LaBelle, “I think it would be the same as Bill Schuette again. It’s deeply worrisome.”

Schuette is currently appealing a ruling in another ongoing case, Hill v. Snyder, that argued that as juvenile lifers go through resentencing, they should be able to use disciplinary credits that would allow them to leave prison sooner for behaving well. Bosie Smith, for instance, was sentenced to life without parole for a homicide he committed in Ypsilanti, Michigan, at the age of 16. In prison he earned his GED, worked in a rescue program for greyhound dogs, and taught conflict resolution classes to other inmates. After 26 years, he was paroled in early September along with roughly 80 people impacted by the ruling. According to LaBelle, Schuette is considering whether his office would strip these former lifers of their disciplinary and good-time credits if his appeal is successful. (His office did not reply when asked to verify if this was true.) It’s unclear what that would mean for those who have been released, but “if the good time is taken away—in the past, they have gone out and they have brought people back” to prison, LaBelle explains. Nessel says she believes they should have access to their credits and would not fight the ruling if elected.

As the midterms approach, Kevin Boyd is still counting the days until his resentencing. “I’d be lying to say I’m not scared to death right now, as we’ve seen life sentences handed out as well as freedoms handed out,” he wrote to me recently from Thumb Correctional Facility in Lapeer. “It’s the luck of the draw at this point.”

Bosie Smith got a job within days of his release, at an upscale restaurant in Ann Arbor. He found temporary housing, opened a bank account, and connected again with his family. And he recently registered to vote in the midterms. “It felt wonderful,” he says. “To come from ‘You can’t do this, you can’t do that, you have no say-so in this, you have no say-so in that.’ Now the ball is in my court and I have the power to cast my vote, to have a say in what I think is paramount for this country.”