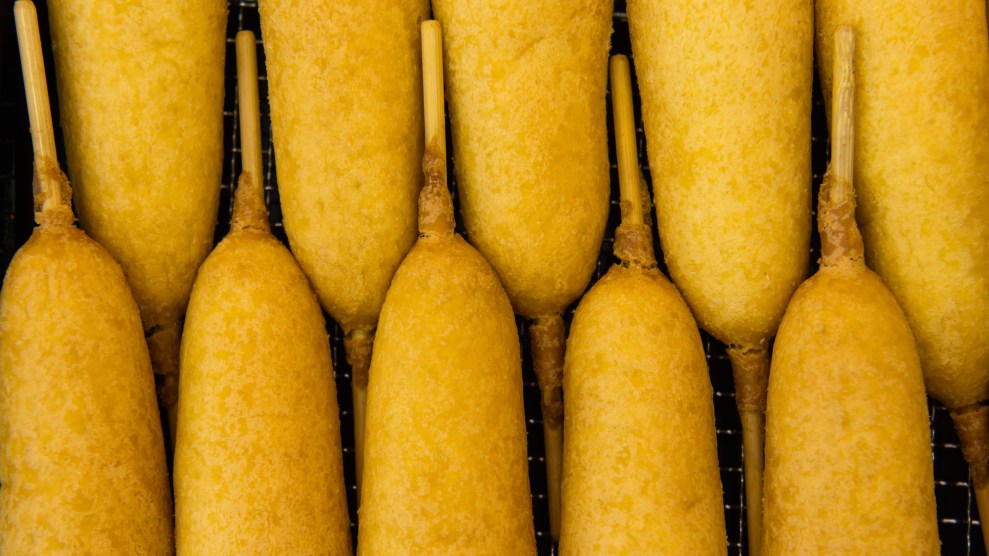 Ten years ago, an Alabama sheriff paid $500 for half a truckload of corn dogs. It was a sweet deal for Morgan County Sheriff Greg Bartlett, who liked to find free or donated food for his county jail so he could pocket the leftover money from a state stipend for feeding inmates. For weeks, Bartlett’s prisoners ate corn dogs twice a day, and he used the savings to pad his own wallet, as he testified in a federal court case in 2009. He kept a total of $212,000 over a three-year period—taking advantage of an ambiguous state law that lets sheriffs pocket tax dollars meant to buy meals for jail inmates.

Bartlett became known as “Sheriff Corndog,” and a federal judge eventually threw him in his own jail for a night for not providing his inmates a nutritionally adequate diet. Yet even after that high-profile scolding, other Alabama sheriffs continued to use their jails’ food budgets to enrich themselves. But on Election Day, voters in Alabama’s Morgan and Cullman counties will decide whether to force their local sheriffs to keep their hands out of the till. Specifically, they’ll vote on amendments to the state constitution that would require sheriffs to use their food budgets only for feeding inmates or related law enforcement expenses. (Due to the quirks of Alabama constitutional law, many county-level policy changes cannot be made without going through the arduous process of changing the state constitution.)

The long-standing practice of sheriffs pocketing extra food money traces back to a 1939 law written at a time when sheriffs’ wives sometimes cooked for their husbands’ inmates. Yet in its current form, the system “creates a perverse incentive to spend as little as possible on feeding people,” says Aaron Littman, a staff attorney for the Southern Center for Human Rights who supports the amendments as a partial solution to the problem. Alabama sheriffs have personally claimed hundreds of thousands of dollars in federal, state, and municipal tax dollars, AL.com reported in February.

The practice has led to some colorful scandals. According to court documents, while Bartlett was siphoning food funds for his personal use, inmates in his jail experienced hunger pangs and weight loss. For breakfast, they got half an egg, a slice of white bread, and a serving of oatmeal. Lunches consisted of two sandwiches thinly spread with peanut butter or a single slice of baloney, along with corn chips and unsweetened tea or Kool-Aid. Dinners sometimes included bloody chicken bits. Canned fruit was served a few times a year; milk, never. The federal judge who locked up Bartlett for violating a court order to improve conditions in the Morgan County jail told the New York Times that the law allowing sheriffs to pocket their surplus food budgets was “almost an invitation to criminality.”

After the corn dog episode, the judge explicitly prohibited Bartlett from dipping into the inmate food fund. Yet the next Morgan County sheriff, Ana Franklin, believed that court order did not apply to her. In 2017, she conceded to taking $160,000 from the food budget and then investing $150,000 in a used-car dealership. The dealership’s co-owner, who had previously gone to prison for kiting checks, was later arrested for “running a scam operation,” according to AL.com. Franklin later paid back the money from the food fund; she was also found in contempt of court and fined $1,000.

Last year, Etowah County Sheriff Todd Entrekin and his wife purchased a four-bedroom beach house with a pool—one of the couple’s properties, which are worth $1.7 million. Entrekin, who earns less than $100,000 annually, had supplemented his income with more than $750,000 in jail food funding over three years, AL.com and Birmingham News investigative reporter Connor Sheets found.

Entrekin also paid a teenager to mow his lawn with money from a personal account he referred to as his “Food Provision Account,” Sheets reported. “The law says it’s a personal account and that’s the way I’ve always done it,” Entrekin said in February. He also claimed that the money for the beach house came from his wife’s earnings. He lost his primary election in June by a margin of nearly 2 to 1, after his beach house made international headlines.

Alabama county jails get their food budgets from several sources. The state sends sheriffs $1.75 per day (the same amount some states spend per meal) for each state prisoner held in their jails, along with a small “food service allowance.” Local governments pay sheriffs varying rates to feed their prisoners. For the handful of jails with contracts to hold immigration detainees or US Marshals Service inmates, federal food reimbursement rates can be much higher.

Littman believes it’s illegal for sheriffs to skim unspent money from all these funds. “The sheriff is a public official that runs a jail as a public institution,” he argues. “A jail is not his personal kitchen, and it is not his personal food service business.” Earlier this year, the Southern Center for Human Rights and the Alabama Appleseed Center for Law and Justice sued 49 Alabama sheriffs for not disclosing public records showing how much they personally earned from jail food funds. This month, the centers, along with conservative and immigrant worker groups, asked US attorneys to investigate whether sheriffs with federal detention contracts also pocketed excess federal food money—possibly breaking federal law. The Department of Homeland Security’s Office of the Inspector General office was reportedly investigating Sheriff Entrekin for the same potential violation as of July.

Some limits on food fund skimming have been imposed. Several counties, including Montgomery and Jefferson, have already instituted rules diverting leftover money to the county government. This summer, Gov. Kay Ivey’s office clarified that state food service allowances must be paid to sheriffs in their official, not personal, capacities. And in August, the state comptroller added language to the form that sheriffs sign to receive the state funds, forcing them to commit to spending the money only on “preparing food, serving food and other service incident to the feeding of prisoners.”

The proposed constitutional amendments for Morgan and Cullman counties would apply to all food funding, regardless of the source. They also would increase sheriffs’ salaries—from $71,180 to $96,276 in Morgan County, according to the Decatur Daily—potentially removing an incentive to take food money.

Yet even if the amendments pass, sheriffs in other counties can still claim some jail food funds for personal use. So far, attempts to pass state laws ending the practice for good have been unsuccessful. State Sen. Arthur Orr (R-Decatur), who sponsored the bill that put the Morgan County amendment on the November ballot, intends to introduce a bill next year that would end the system “once and for all.”

For now, the Alabama Sheriffs Association isn’t opposing such a move. When Robert Timmons, the association’s executive director, criticized the comptroller’s bid to end the skimming of state funds this summer, he argued that only county officials or the state Legislature had the authority to cut off the profit stream for sheriffs. “Every sheriff would love to get out of this inmate food business,” Timmons told Sheets. “But we need to all be singing out of the same hymnbook.”