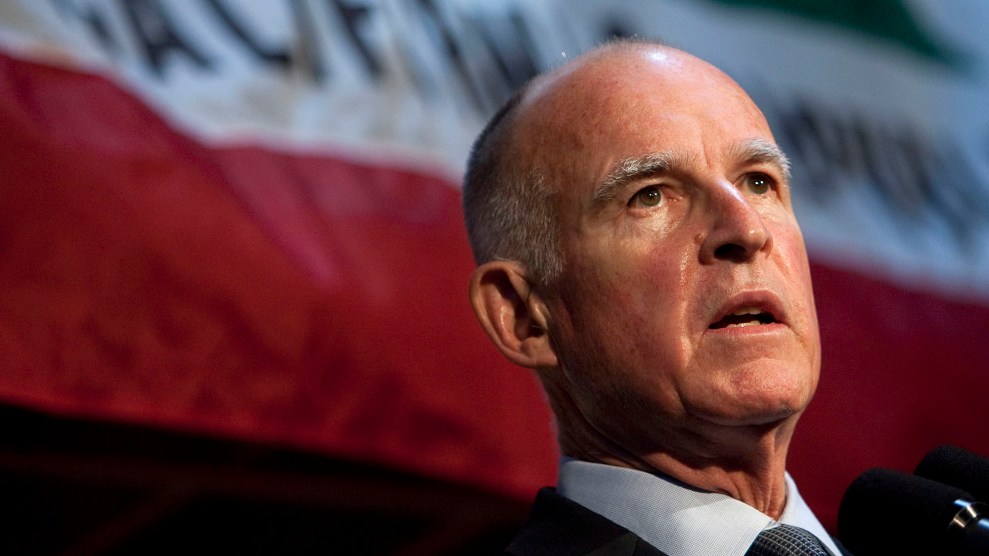 Jerry Brown, then governor-elect of California, speaks during a press conference at his campaign headquarters on November 3, 2010.David Paul Morris/Getty Images

California Gov. Jerry Brown signed a landmark bill Tuesday that eliminates money bail in the state and replaces it with a risk assessment system that gives judges more power in deciding who is detained before trial. A handful of states already use risk assessment and some places, like New Jersey, have eliminated cash bail altogether.

“A person’s checking account balance should never determine how they are treated under the law,” said Lieutenant Gov. Gavin Newsom in a statement about the new law, which will go into effect in October 2019. “Cash bail criminalizes poverty and with Governor Brown’s signature today, California has opened the door to pursue and perfect a just pre-trial system.”

The bill, which was first introduced in the state Legislature in 2016, initially enjoyed widespread support among criminal justice advocates. But the legislation was significantly revised following pushback from judges who worried it would negatively impact their independence and discretion. Several groups, including the state American Civil Liberties Union, retracted their support.

As I reported earlier this week, opponents of the proposal, which includes many criminal justice advocates, worry that rather than reducing the number of people who are detained pre-trial, the leeway that the bill gives to judges who make detention decisions will actually lead to more people behind bars. Furthermore, the bill requires counties to use risk assessment—controversial tools that put factors like the severity of the charges against a defendant and their past criminal record through an algorithm to determine the likelihood of certain behavior—to help make detention decisions, a system which some activists say can exacerbate racial biases in the criminal justice system.

[L]egislators in California have faced a series of setbacks in implementing risk assessment in the state. A version of SB 10, introduced in late 2016 and amended several times last year, would have radically changed pretrial detention by putting the burden on judges to prove why someone should be detained as opposed to presuming detention. And it would have narrowed the pool of defendants who could be detained to only those charged with the most serious crimes. (However, it still would have allowed money bail in some cases.) The bill explicitly said its intent was to “[address] racial and economic disparities in the pretrial system.”

Critics say that, unlike the earlier version of the bill, this iteration gives the discretion of individual judges too much weight and opens the system up to more biases. And they say the bill gives counties too much power in deciding what specific assessment tools to use and how exactly they should be used—the bill would not require that risk assessment be implemented in the same way across the state.

Perhaps the most resounding criticism has come from state public defenders, who say the bill’s criteria for detaining someone is too broad and could mean more, not fewer, people will be held in California jails. “It’s an abomination of what the prior bill set out to do,” San Francisco Public Defender Jeff Adachi, who wrote op-eds in the Sacramento Bee and San Francisco Chronicle against the bill, told Mother Jones. “It gives pretty much all the power to judges who, for the most part, were the major culprit in high incarceration rates, particularly of poor people, because they would use high bail in order to keep someone behind bars.”

Read the rest of the story here.