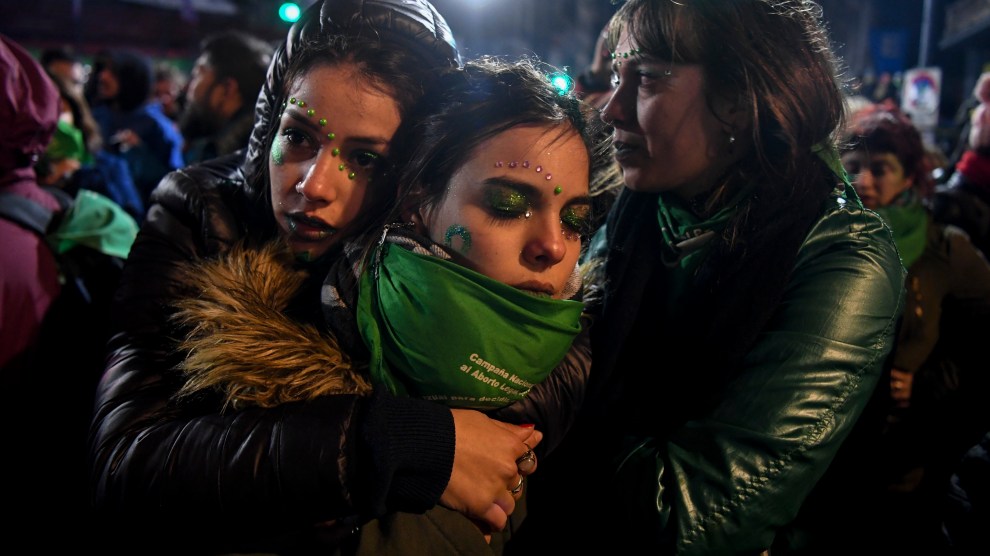 Supporters of legal abortion comfort each other after senators rejected the bill.Eitan Abramovich/AFP/Getty Images

In a highly anticipated vote, Argentinian senators early Thursday rejected a bill that would have legalized abortion for pregnancies no further along than 14 weeks. The vote, which followed 16 hours of deliberation, was 38-31, with two senators abstaining. In anticipation of an announcement, enormous crowds gathered outside the Argentinian congress, where both supporters and opponents had held vigil since Wednesday afternoon.

The vote came almost two months after Argentina’s lower house approved the bill by a slim margin. The proposal deeply divided this predominantly Catholic nation, home of Pope Francis. Polling in March suggested 60 percent of the public was in favor of legalization, although opposition was strong in rural areas. The country’s current law allows abortion only in cases of rape or if the pregnancy poses a risk to the woman’s health. President Mauricio Macri has said that he is personally “pro-life,” but that he would not veto the bill should it pass.

Abortion-rights demonstrations in Argentina have swelled over recent months, sometimes bringing Buenos Aires to a standstill. Activists from the Ni Una Menos (Not One Less) women’s movement took to the streets wearing distinctive green bandannas, while conservative Catholics and evangelicals rallied with blue handkerchiefs. Hundreds of physicians also joined protests, with some laying their white medical coats on the ground outside the presidential palace.

Amnesty International reports that thousands of Argentinian women have died from illegal abortions.

Human Rights Watch estimates that 500,000 clandestine abortions take place yearly in Argentina. Amnesty International reports that more than 3,000 Argentinian women have died from unsafe abortions over the past quarter-century.

Since the lower chamber vote in June, the bill’s most vehement supporters have been demonstrating while clad in the red cloaks and white bonnets associated with Margaret Atwood’s dystopian novel, “The Handmaid’s Tale.”

Atwood has described how her book was partly inspired by events during Argentina’s historic dictatorship. Tens of thousands of people were forcibly “disappeared” by the country’s military junta in the 1970s and ’80s, but pregnant women were initially given a reprieve. “They would wait until she had the baby and then they gave the baby to somebody in their command system,” Atwood told the Los Angeles Times. “And then they dumped the woman out of the airplane.”

In June, Atwood tweeted in support of the abortion bill.

Vicepresident of Argentina @gabimichetti: don't look away from the thousands of deaths every year from ilegal abortions. Give argentinian women the right to choose! #AbortoLegalYa #QueElAbortoSeaLey #NiUnaMenos #AbortoEnSenadoYa @cdnwomenfdn @equalitynow

Elsewhere in Latin America, thousands of Chileans rallied in Santiago last month to demand an overhaul of that nation’s abortion laws. And Brazil’s supreme court recently held an exceptional two-day public hearing to consider whether to decriminalize abortion up through the 12th week of gestation.

Abortion is legal in Mexico City, Cuba, Uruguay, Guyana, and French Guiana, but the practice is also forbidden in El Salvador, the Dominican Republic, and Nicaragua.