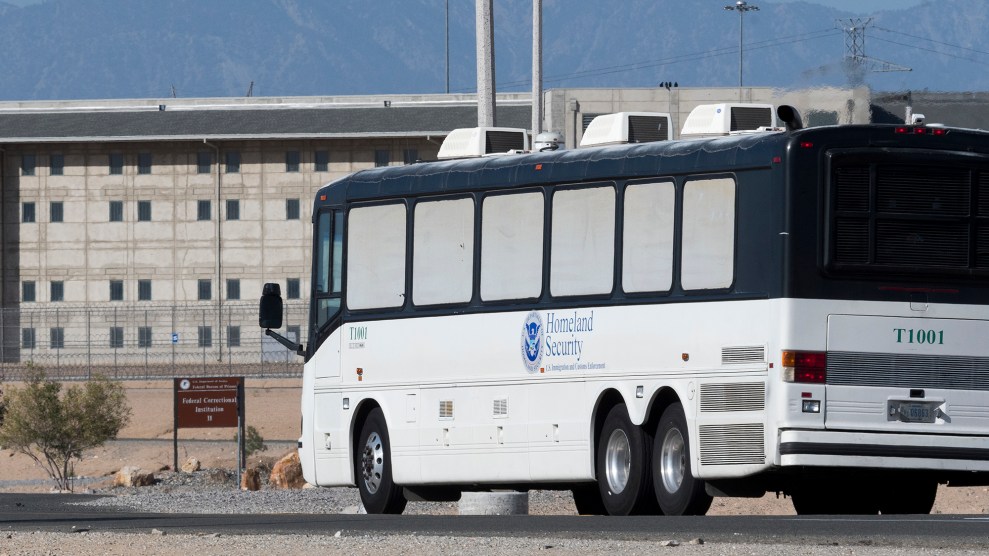 Last week, as the first busloads of immigrants rolled up to the federal prison complex in Victorville, California, the facilities there went on lockdown. The Victorville complex, in an unexpected move, had agreed to accept 1,000 detainees from Immigration and Customs Enforcement, which said it had run out of beds because of its crackdown on border crossings. This large-scale transfer was unprecedented, the outcry immediate: Human rights advocates railed against the treatment of immigrants like criminals. And prison employees said they were largely unprepared for the influx.

I checked with John Kostelnik, a case manager at the complex and president of the local prison employee union, to see how things were going. To hold the immigrants, he said, the complex had opened units in one of its two medium-security facilities previously closed because of a reduction in the inmate population and a shortage of staffers. He said there was enough space for the new arrivals, but that employees were scrambling to figure out how to care for them. “It sounds like they are winging it, like they don’t know what the hell they are doing,” he said, referring to prison officials.

The prison complex has no experience in dealing with civil immigrant detainees and was unprepared for questions that might arise, said Kostelnik, who spoke to Mother Jones on behalf of the union. “Are they going to get visitation? Are they going to get recreation? Every answer I was getting was, ‘I don’t know, I don’t know, I don’t know.'” The union argues that the complex lacks enough guards and other employees to safely care for the large influx of immigrants. A shortage of medical staff is also raising concerns, particularly after some of the new detainees tested positive for tuberculosis.

On Friday, dozens of prison employees and members of the national umbrella union American Federation of Government Employees Council of Prison Locals protested outside the facility, some with family members at their side, holding signs that read, “Budget cuts may result in death” and “Safety before bonuses.” The federal Bureau of Prisons did not respond to a request for comment, and nobody returned messages or answered the phone when I called the Victorville complex to ask about the concerns raised by the union and by immigrant-rights advocates, which are as follows:

Mixing with criminal inmates: Immigrant detainees—who are not facing criminal charges—are being housed in the same facility as regular prisoners, but in different units. Kostelnik says the complex is still working out policies for how to avoid contact between the two populations during recreation and meal times. Some interaction may be unavoidable: For instance, inmate workers will likely need to enter the immigrants’ unit to clean communal bathrooms. “The only thing separating [them] is a steel door—they will be separated physically, but that doesn’t mean inmates can’t yell at them, can’t talk to them,” Kostelnik says.

This isn’t the first time ICE detainees have been held alongside inmates. Across the country, such mixing routinely happens at county jails that have contracts with ICE. And there’s at least some precedent for federal prisons sharing space with immigrant detainees—the Eloy Detention Center in Arizona, now reserved for ICE detainees, was once split half and half between immigrants and federal inmates.

Last week, about 600 immigrants were sent to prisons in Oregon, Texas, Washington, and Arizona. But the sudden influx to Victorville was unusually large, and it involves a facility that did not appear to have comprehensive policies in place to deal with the change. “We know more about inmates than we do detainees—it’s a whole other ball game with them,” Kostelnik. Though guards will treat them according to the prison’s standard procedure, “we don’t know how we are going to discipline them. We don’t know if we can write them incident reports. We don’t know.”

Access to lawyers and translators: ICE selected the Victorville complex because of its proximity to the border and its available space, but it’s in a remote area, which makes access to attorneys and translators more difficult. This is a problem at many rural detention centers, according to attorneys I spoke with, but the situation appears to be particularly bad here.

A lawyer who drove 90 miles to meet clients was turned away by prison staff: “They seemed pretty confused.”

Lindsay Toczylowski, a lawyer with the Immigrant Defenders Law Center, told me she drove 90 miles this week to meet potential clients at Victorville but was turned away. The facility had canceled visitation during the intake process. “My understanding was that attorneys should still be given access,” she says. Prison staff seemed unfamiliar with ICE protocol, she adds: Employees told her ICE would need to authorize her visit, and that immigrants would need to include her name on an approved list before she could meet them.

That may be standard practice for prisoners, but it’s not required at other immigrant detention centers, Toczylowski says. “They seemed pretty confused,” she says. And the staffers would not even guarantee that immigrant detainees could meet with counsel before heading to court. “We are really concerned about this.”

Language barriers are also a problem. Kostelnik told me prison employees can telephone ICE translators, “but it’s still very difficult—it’s not something we were set up for. We don’t have anyone onsite.”

Inadequate supervision: The new immigrants have increased the population at the prison complex by about a quarter, to roughly 4,600 people. But employees were complaining of dangerously low staffing levels even before the newbies arrived.

“That rehabilitation is basically being thrown in the garbage.”

At federal prisons, teachers, cooks, and nurses are regularly pulled away from their jobs to work as guards in housing units—a situation that became worse after the Justice Department announced in January that staff would be cut further. As a result, “that rehabilitation is basically being thrown in the garbage,” Kostelnik says, and the medical department fears it won’t have enough manpower to deal with health issues the new arrivals may bring. “They keep throwing these things on us and eventually we’re going to break—and we’re going to get blamed.”

Astonishingly, the local union says, the Victorville complex does not have plans to hire more workers to help handle the immigrant detainees. In part, that’s because the detainees are only supposed to be there for 120 days, and it might take longer than that to hire and train new people. “But it’s not an excuse to say it’s only temporary,” Kostelnik says. “It only takes seconds for someone to get murdered.”

The medical staffing shortage is of particular concern. This week, initial tests for tuberculosis came back positive for some new arrivals, and further testing will be required to determine whether they might be contagious. Other immigrants have arrived with rashes and skin legions, which are “basically being put on hold because we don’t have the medical staff to treat them,” says Kostelnik.

Lack of transparency: It’s unclear how conditions at the federal prison complex will compare with those at designated immigrant detention centers, which are often run by private companies that lack oversight. “To me, they are all abysmal and they all have issues,” says Holly Cooper of the Immigration Law Clinic at the University of California-Davis, who has visited dozens of prisons and detention centers. “I don’t know you can say that sitting in an ICE facility is qualitatively a better experience than sitting in a prison—to move from one to the other is really a shell game.” But if immigration officials are already struggling to supervise existing detention facilities, says ACLU attorney Victoria Lopez, there are concerns that moving detainees into a different system run by a different agency could make things worse. “It really raises a question about how the Department of Homeland Security and ICE will be able to oversee what’s happening to folks detained there.”

“They are being denied access to counsel and are being held in facilities meant to be punitive.”

Kostelnik said one Victorville detainee told him during intake that the prison was nicer than the place where he was previously detained, but that’s “only one person.” As a union leader, he has not been allowed to tour the facility in person since the immigrants arrived. “It’s been so secretive internally that I haven’t been getting any information.”

Toczylowski, the lawyer who was turned away at the Victorville gate, told me she’s seen enough red flags to know the situation is not good: “They are being denied access to counsel and are being held in facilities meant to be punitive,” she says. “That alone is a real violation of the human rights of immigrants.”