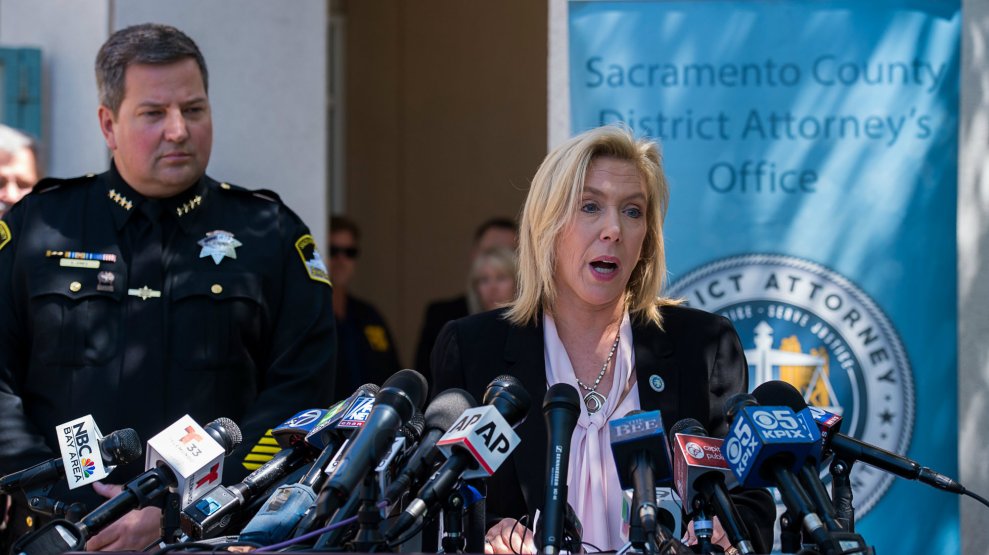 The race for district attorney in Sacramento, California, where city police fatally shot an unarmed, 22-year-old black man named Stephon Clark last month, is shaping up as a referendum on police accountability and mass incarceration.

Incumbent DA Anne Schubert, a Republican in a city and county dominated by Democrats, has come under harsh scrutiny from local and national groups, media organizations, and her Democratic rival for her tough-on-crime positions and financial ties to police organizations.

The Intercept last Wednesday ran a report detailing more than $400,000 Schubert has received from local and state police groups over the years—an amount that constitutes nearly a third of her overall campaign donations, according to the article.

Schubert “has prosecuted more activists for civil disobedience than she has officers involved in misconduct,” a local paper wrote.

Schubert was already taking heat, at least in liberal circles, for having declined to file charges against a single officer, despite more than 20 officer-involved shootings and 13 deaths in law enforcement custody in her jurisdiction in 2015 (when Schubert took office) and 2016, according to the Sacramento News & Review. She “has prosecuted more activists for civil disobedience than she has officers involved in misconduct,” the weekly paper wrote.

The more recent donations, say local reform groups and Schubert’s challenger, Assistant DA Noah Phillips, could influence Schubert’s decisions related to the Clark shooting, which is still under police investigation. Now those groups are publicly speculating that Schubert’s reluctance to prosecute in dozens of earlier police-related deaths may have been swayed by the law enforcement cash her various campaigns—one for superior court judge, one for DA, and then her current reelection effort—have collected going back to 2009.

Schubert took money from local police unions as recently as earlier this month, according to the Intercept report. She also accepted donations from police unions in the week after Clark’s death, according to campaign finance records. She has yet to announce her prosecutorial intentions related to more than a dozen other police shootings and in-custody deaths in 2017 and 2018.

Incumbent district attorneys are facing unusual scrutiny this election season as progressive groups push to replace old-school DAs across the country with reform-minded candidates. Few incumbents are under more pressure than Schubert. The police donations just after Clark’s death drew headlines from local and national media outlets, and the Phillips campaign has capitalized on the controversy, unveiling a new TV ad suggesting that Schubert cannot be an impartial arbiter in the Clark case. Groups including the local Black Lives Matter chapter, the Anti-Police Terror Project, and Real Justice PAC—a national group that is backing Phillips and working to educate voters on the issues—are also claiming Schubert is beholden to the police.

It is not uncommon, actually, for district attorneys to accept campaign donations from police groups. But those who do run the risk of bad optics, experts say. Police reform groups, not surprisingly, consider such donations a conflict of interest.

Local groups are stepping up their organizing as the June 5 election nears. Sacramento Area Congregations Together, a coalition of some 50 faith groups, schools, and others organizing around the race, is canvassing neighborhoods every weekend until Election Day. The nonpartisan coalition advocates criminal justice reform—volunteers aim to educate voters about the powers and critical role of the district attorney.

Other groups are taking a partisan approach: Black Lives Matter Sacramento is circulating contact information for Democratic politicians who have endorsed Schubert, and the group is encouraging people to call and pressure the pols to rescind their endorsements. Real Justice PAC has done likewise, and is calling on local Dems to endorse Phillips instead—RJP also has donated at least $13,000 to the Phillips campaign and is helping it recruit volunteers.

Reformers are also targeting Schubert over her positions on state ballot initiatives that affect California’s jail and prison populations. She was an ardent opponent of a 2014 initiative that aimed to alleviate unconstitutional overcrowding by reclassifying some felonies as misdemeanors and allowing people convicted of those crimes to apply for reduced sentences. She sued Gov. Jerry Brown in 2016, hoping to block an initiative that increased early-release opportunities for nonviolent offenders and ended prosecutors’ unilateral discretion in deciding when juvenile defendants should be charged as adults. She also adamantly opposed a failed 2016 measure that would have ended the death penalty in California, instead penning an op-ed in support of a successful measure to speed up the execution process. Schubert also fought against  Prop. 64, the ballot initiative that legalized the recreational use and sale of marijuana.

Now Schubert is supporting a campaign for a measure that would roll back some of the reforms put in place by earlier initiatives: The so-called Reducing Crime and Keeping California Safe Act of 2018 would elevate certain misdemeanor offenses to felonies and make it harder for some offenders to seek parole or early release.

Schubert, whose campaign declined an interview request for this story, has maintained that she has always “follow[ed] the facts” in her decisions and that the donations from police groups have not influenced her choices. Her positions on past ballot measures, she has said, were in keeping with the best interest of crime victims and the public, and she has added that despite ongoing protests outside her office demanding charges against officers in the Clark case, she cannot make any decisions until the police department has completed its investigation. The demonstrators have been so persistent that Schubert recently erected a metal fence around her building to thwart them.

Phillips, Schubert’s rival, is running on a platform that includes bail reform and greater transparency around the office’s handling of police shootings—he argues that Schubert could have dealt with the case differently, in part by immediately laying out for the public her process for such a case. (She only did so in a press conference a full month after Clark’s death.)

Phillips showed up at several rallies for Clark in the weeks after the shooting as well as city council meetings and other forums where the incident was being discussed “to hear what concerns are being raised” and to campaign. “People have to understand that their leaders are willing to lead them, find solutions, and move forward,” he explains. “If you are absent, no one will trust you, no one will have faith in the system, and no one will believe you when you give them information.”

If she loses, Schubert wouldn’t be the first district attorney to go down over a police shooting.

The vast majority of the establishment Democrats have already endorsed Schubert—and so far, none has succumbed to the reformers’ pressure tactics. (The Phillips campaign chalks up its endorsement deficit in part to the fact that Phillips didn’t start campaigning until January, more than two months after Schubert announced her bid.) There is no independent polling in the race. In an internal poll commissioned by the Phillips campaign, voters overwhelmingly chose Schubert, but after they were read “brief and balanced” statements describing the candidates and their positions, Phillips pulled to an 11 point lead. The Schubert campaign would not share any internal polling results.

If she loses, Schubert wouldn’t be the first district attorney to go down over a police shooting. Cleveland’s former top prosecutor Tim McGinty, who declined to press charges in the 2014 death of 12-year-old Tamir Rice, and Anita Alvarez, who faced calls for her resignation over her botched handling of the Laquan McDonald case in the Chicago area, were both defeated in 2016, as was Angela Corey, the former Florida prosecutor who failed to convict Trayvon Martin’s killer, George Zimmerman. Reform DA candidates beat incumbents in several more races in 2016 and last year.

Sacramento County Sheriff Scott Jones faces a similar type of electoral challenge. In January, the editorial board of the Sacramento Bee published an op-ed calling for someone to run against Jones, a Republican and a staunch Trump supporter who was unopposed in his previous reelection bid. The paper cited lawsuits over alleged abuse by Jones’ deputies that have cost the county millions, and personal attacks the sheriff made last year against the founder of BLM Sacramento. Jones has also taken heat for his office’s contract with the Immigration and Customs Enforcement Agency to house detainees in a county jail.

Jones, who donated to Schubert’s first campaign for district attorney, will now be facing Milo Fitch, a former deputy chief at the Sheriff’s Department who is running on a platform that includes support for bail reform and increased educational and jobs programmings for county jail inmates. Many of the groups organizing around the DA race say they plan to get involved in the sheriff’s race as well. They are hoping public outrage over the Clark shooting will prove pivotal in getting people to the polls. “Stephon Clark creates a sense of urgency for folks in Sacramento to say enough is enough,” says Gabby Trejo, an organizer with Sacramento ACT. “Folks are ready for change.”