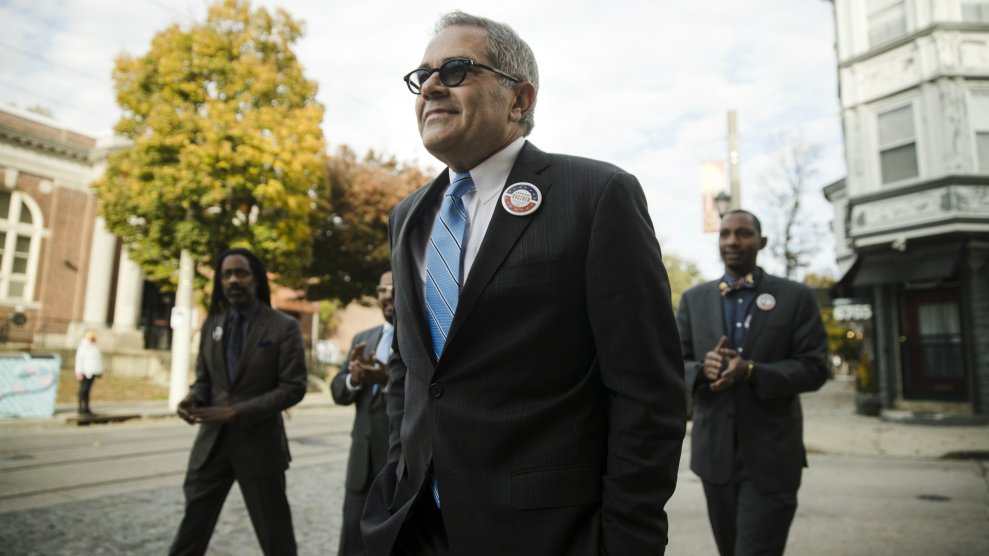 Larry Krasner heads to his polling place to cast a ballot on Nov. 7, 2017. Matt Rourke

Newly minted Philadelphia District Attorney Larry Krasner was elected on a platform of bringing criminal justice reform to the office and attacking mass incarceration. Now Krasner, a former civil rights attorney, seems to be making good on his promise. In a recent office memo—first issued in February but made public this week—Krasner swaps the office’s traditional tough-on-crime approach in favor of one intended both to reduce the number of people in city jail and prisons, and to shorten the duration of their stays.

“If the goal is reducing mass incarceration, that strikes me as an incredibly significant measure.”

The memo instructs prosecutors to cease charging certain offenses entirely—including possession of marijuana, regardless of the weight carried, and prostitution in some circumstances. It also encourages assistant DAs to punish people with house arrest, probation, and alternative sentencing much more frequently, and to seek shorter probation sentences. Krasner’s subordinates must now get permission before seeking sentences of more than six months for a minor probation violation, or more than one year for a more serious one.

“If the goal is reducing mass incarceration, that strikes me as an incredibly significant measure,” says Jonathan Feinberg, a civil rights and criminal defense attorney who has practiced in Philadelphia for more than 15 years. “What trips people up in the criminal justice system most frequently is long periods of probationary supervision. Every little misstep brings court involvement and further punishment,” often with little to no benefit for public safety or rehabilitation, he adds.

Krasner’s memo also directs prosecutors to offer plea deals with shorter sentences than suggested by state sentencing guidelines, and to get his permission before offering more-punitive deals—a crucial change, as more than 90 percent of criminal convictions nationwide are the result of a plea. (The number of criminal cases that go to trial in Philadelphia is notably higher than the national average, however.) Under the new rules, prosecutors require permission for things they would be expected to do of their own accord in another jurisdiction—or under Krasner’s predecessor. It’s “a wholesale change in the focus of the office,” Feinberg says. “The Philadelphia District Attorney’s office has had as a fundamental focus the idea that punishment should be harsh. That’s not so much the case” now.

“I expect that district attorneys, defense lawyers, prosecutors, and judges, will be watching closely.”

Perhaps most interestingly, Krasner is asking his prosecutors to point out in court the impact that the recommended sentence would have on the defendant’s family ties, employment prospects, or access to public assistance. They also must state how much the sentence would cost taxpayers: “The cost of one year of unnecessary incarceration ($42,000-$60,000) is in the range of the cost of one year’s salary for a beginning teacher, police officer, fire fighter, social worker, Assistant District Attorney, or addiction counselor,” the memo notes. “You may use these comparisons on the record.”

The memo “greatly expands” the focus of sentencing from punishment to the collateral consequences of incarceration, according to Feinberg. Defense attorneys could use the provided information to argue that the cost of a recommended sentence—to the defendant and to the state—exceeds what the facts justify.

Could Krasner’s memo serve as a blueprint for the nation’s progressive DAs to push reforms city by city? Perhaps, Feinberg says. “We know there are district attorneys coming into office with the promise of reducing the punitive focus. So I think this memorandum is an interesting template to work off of, and I expect that district attorneys, defense lawyers, prosecutors, and judges, will be watching closely to see how the system is impacted.”

You can read the full memo below.