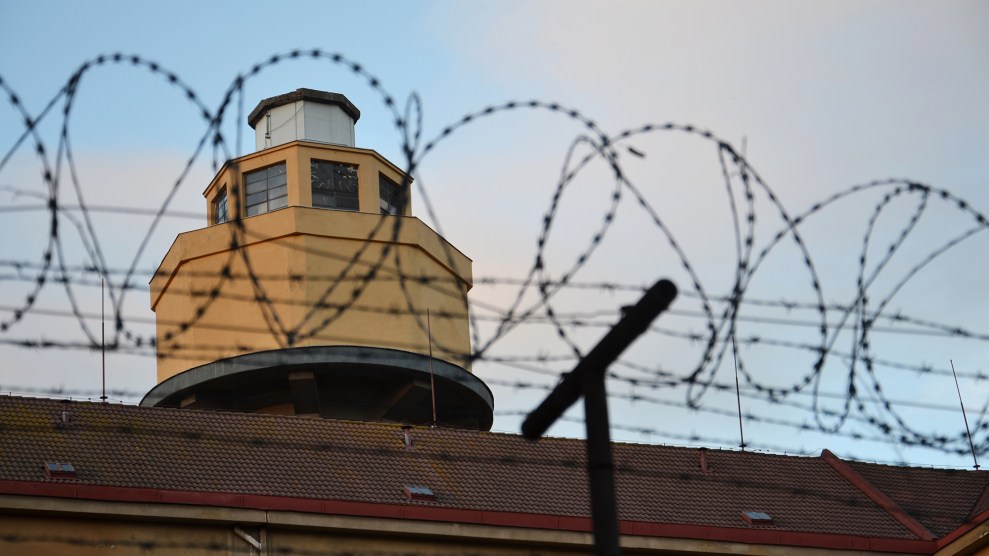 Prison companies that backed Donald Trump during the presidential campaign and gave hundreds of thousands of dollars to his inaugural committee just got another boost from his administration. The Bureau of Prisons will now transfer more inmates from government-run lockups to private facilities, according to a memo sent to department staffers last week, as the agency prepares to cut federal correctional jobs.

Trump has requested in his budget proposal a reduction of 6,000 BOP positions, including more than 1,800 correctional officers.

The memo, published by Government Executive on Thursday, orders federal prisons to identify eligible inmates for the transfers by targeting low-security, male immigrants who are serving time for crimes. According to the directive, the move is intended to alleviate overcrowding at government facilities and “to maximize the effectiveness of the private contracts.” Currently, 11 private prisons contract with the BOP, and most hold immigrants convicted of crimes.

Under President Barack Obama, the Justice Department started phasing out its use of private prisons after the inspector general found them to be less safe than publicly run facilities. But when President Trump took office, the department switched course: Last February, Attorney General Jeff Sessions described private prisons as essential for meeting “the future needs of the federal correctional system.” Stock prices for prison industry giants like CoreCivic and GEO Group soared soon after.

Speaking to investors last summer, executives from both companies highlighted BOP plans for a “capacity realignment” to avoid overcrowding in publicly run prisons and ensure, as CoreCivic CEO Damon Hininger put it, that low-security inmates “are being housed in the most cost effective facilities.” While the latest directive targets immigrants serving time, prison executives have suggested that other inmates may soon be transferred too. “You’ll see the bureau evaluate U.S. citizens as they have previously evaluated criminal aliens,” J. Dave Donahue, president of GEO Group’s US corrections operations, told investors on an August call.

At the federal level, the biggest client for these prison companies is the Department of Homeland Security, which contracts with them to detain undocumented immigrants who face deportation. Still, the Bureau of Prisons is an important partner for CoreCivic and GEO Group, which collectively run 9 of the agency’s 11 private contract facilities.

The bureau’s expanded use of private lockups comes as the agency plans to cut the number of correctional officers and other employees at publicly run prisons. In a conference call days before the memo leaked, the bureau told facility administrators to expect a 12 to 14 percent reduction in staffing levels—though lawmakers and others have argued that prisons are already dangerously understaffed. “This is catastrophic for the safety and security of our institutions,” Ray Coleman, president of a Florida-based union chapter of the American Federation of Government Employees Council of Prison Locals, said in a statement after hearing of job cuts at a federal prison in Tallahassee.

The Bureau of Prisons has for years run on what it describes as “mission critical” staffing—defined as the minimum levels of staffing required to safely operate each facility. But federal investigators have warned that combined with overcrowding, these low staff levels have left inmates and guards more vulnerable to assault. In 2015, then-BOP Director Charles E. Samuels Jr. told Congress that a shortage of correctional officers also hampered efforts to provide inmates with programs. During a House Oversight Committee hearing on prisons in December, lawmakers asked the Bureau of Prisons’ new chief, Mark Inch, why the administration now wanted to dip below mission-critical staffing levels. “Though I can’t specifically answer on the process that resulted in the mission-critical staffing positions by facility,” said Inch, who had been appointed three months previously, “it is certainly a priority [to] relook at our staffing numbers.”

“We’re talking about the safety of people like Eric Williams and his coworkers,” said Rep. Matt Cartwright (PA), referring to a 34-year-old correctional officer who was stabbed to death at a federal prison.

“I want you to relook at that because we’re talking about the safety of people like Eric Williams and his coworkers,” said Pennsylvania Rep. Matt Cartwright, referring to a 34-year-old correctional officer who was stabbed to death at a federal prison in Pennsylvania in 2013. “Absolutely,” Inch replied.

Congress has not yet passed a complete budget bill for the 2018 fiscal year. Trump has requested in his budget proposal a reduction of 6,000 BOP positions, including more than 1,800 correctional officers.

“This administration is setting the [BOP] up for failure,” said Coleman. “As violence and recidivism rise, and our staff struggle to meet…accreditation requirements, the line staff will be blamed for these failures, and the administration will point to this as an excuse to contract out our law enforcement role to the private prison industry.”