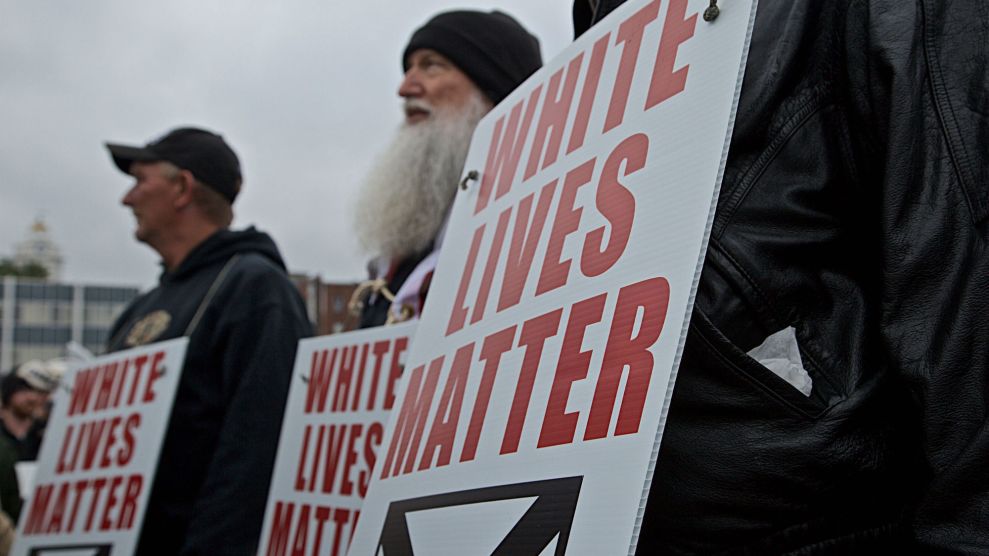 Right-wing extremists communicating in confidential online chats in recent months have shared scores of documents detailing the manufacture and use of bombs, grenades, mines and other incendiary devices.

The documents, which range from instructions on detonating dynamite to U.S. military manuals for constructing improvised explosives and booby traps, were passed around during online conversations among members of Anticom, a secretive and militant group that has emerged during the past year.

Records of the online chats were made available to ProPublica by Unicorn Riot, a leftist media collective that has reported critically on racist marches and right-wing political rallies in cities around the U.S.

Anticom, or Anti-Communist Action, views itself as a guerilla army fighting against what it has called the radical elements of the country’s political left. On its social media channels, Anticom openly embraces fascist ideology and imagery, and the group’s members have engaged in hate-filled talk involving Jews, Muslims, immigrants and African Americans. In recent weeks Anticom has stepped out of the shadows as its members have provided security to so-called alt-right champion Richard Spencer at a speaking event in Florida. Anticom also helped to organize a “White Lives Matter” protest in Shelbyville, Tennessee, last weekend.

It is unclear how seriously the documents shared in the chats were explored by any of Anticom’s members or followers, much less whether the documents were actually used to craft incendiary devices. But the transcripts of the chats include racist talk and open mentions of mass killings.

The user who posted the bomb-making documents, for instance, said he or she wanted to overthrow the U.S. government. “Death to all non whites,” the user wrote in a chat forum post on April 26. Another Anticom member encouraged recruits to construct a bomb and use it to carry out an attack in the style of the 2013 Boston Marathon bombing.

“Death to all non whites,” the user wrote in a chat forum post on April 26.

The chatroom logs shared with ProPublica show that Anticom members were in communication with another extremist group, several members of which have surfaced in federal investigations.

In May, federal agents searching the Tampa home of 21-year-old Brandon Russell discovered an array of explosives and bomb ingredients: fuses made from rifle shells, a white cake-like explosive substance called HMTD, more than one pound of ammonium nitrate and other explosive precursors, and two different kinds of radioactive material. The agents promptly arrested Russell, who was both a member of the Florida National Guard and a leader of Atomwaffen, a small fascist group calling for a “white revolution in the 21st century.”

Federal authorities only uncovered Russell’s bomb-making materials after his roommate and fellow Atomwaffen member Devon Arthurs killed two of their comrades. Arthurs later told law enforcement that he acted in order to prevent acts of domestic terrorism, and that Atomwaffen intended “to build a FourthReich.” Russell participated in “neo-Nazi internet chat rooms where he threatened to kill people and bomb infrastructure,” and was plotting to blow up a nuclear power plant near Miami, according to Arthurs.

After pleading guilty in September to illegally possessing explosive material and an unregistered destructive device, Russell is currently awaiting sentencing, which is scheduled for early next year.

Russell’s attorney, Ian Goldstein, cast doubt on any link between Anticom and his client’s explosives charges. Law enforcement didn’t find any manuals for building bombs in Russell’s home or on his computer, Goldstein said, adding Anticom and its online chats never came up during his research for the case.

Federal prosecutors in Florida would not comment on the case, or any potential overlap between Anticom and Russell and his neo-Nazi cell.

ProPublica asked the FBI whether it was looking into Anticom and the bomb plans. “The FBI does not confirm or deny specific investigations. However, any information regarding violent criminal activity or threats of terrorism should be reported promptly to the FBI,” said spokeswoman Carol Kratty.

Speaking broadly, she noted that the bureau concerns itself with potential acts of terrorism, not unpopular political beliefs. “Our focus is not on membership in particular groups but on individuals who commit violence and other criminal acts. Furthermore, the FBI does not and will not police ideology.”

Anticom, through a designated spokesperson, did not dispute the authenticity of the logs, but said the group had months ago taken steps to ban people threatening violence from the online chats.

“White supremacists and antigovernment extremists have always collected and distributed this kind of content. The internet makes that process easier and cheaper and more anonymous.”

“Of course we denounce that kind of behavior,” the person said. “If an Anticom member built a bomb, he’d be banned as soon as we found out.” Despite the intensely hateful views expressed by many Anticom members, the spokesperson said “all races and ideologies are welcome” in the organization so long as they “are anti-communist.”

The person dismissed any suggestion that Anticom had a connection with Atomwaffen.

Anticom’s size is unknown, but it boasts chapters in at least 15 U.S. and Canadian cities, and members have shown up waving the black-and-yellow Anticom flag at events across the country. (One of the organization’s logos shows a person being hurled from a helicopter, a tactic used by right-wing death squads in Chile and Argentina.) Anticom’s confidential online chats, which were conducted on an encrypted server hosted by service called Discord, give some sense of the organization’s possible scale: people using more than 1,200 different usernames participated in the discussions.

Peter Simi, director of the Earl Babbie Research Center at Chapman University, noted that violent and radical talk are part of the culture of white extremist groups — and that talk typically does not lead to action. Still, he said the material was worrisome.

“All it takes is one person to do something with that information,” said Simi, who has interviewed dozens of white supremacists and co-authored the book American Swastika.

Over the span of about seven months this year — from early February to late September — Anticom members posted more than 90,000 messages on the Discord server before being kicked off the service by company officials. The online discussions include plenty of profanity-laden racist and anti-Semitic banter by people with usernames like “Augusto Pinochet,” “deplorablepatriot,” and “Haupstürmfuhrer Pepe.” More worrisome, though, are the incitements towards violence.

On April 26, one Anticom member posed a question to the rest of the group: “Anyone want access to my pdf library?” the person wrote. “137 pdfs of how to manufacture explosives.”

Saved in the PDF format, the cache of documents includes recipes for making potent bombs from ammonium nitrate, scientific papers on the chemical composition of different explosive agents, an Army manual on deploying anti-personnel mines, and a guide to using radio frequencies to detonate explosives, a tactic frequently used by insurgents in Iraq and Afghanistan.

Some of the bomb documents are highly technical, likely to be of little use to anyone but a skilled chemist or engineer. Other documents are old, like a 1984 book showing how to build hand grenades. As a whole, however, the documents could easily provide a person with the tools to kill and wound scores of people.

“Anyone want access to my pdf library?” the person wrote. “137 pdfs of how to manufacture explosives.”

J.M. Berger, a fellow with the International Centre for Counter-Terrorism in the Netherlands, said social media companies like Discord tend to downplay the dangers posed by racial extremists using their networks and are often slow to curb their activities. “White supremacists and antigovernment extremists have always collected and distributed this kind of content. The internet makes that process easier and cheaper and more anonymous.”

Berger said Discord should consider contacting law enforcement, if only out of a sense of caution. “It’s probably not appropriate to freak out,” Berger said, “but a situation like this merits more scrutiny.”

A spokesperson for Discord, which is primarily used by video game enthusiasts who want to communicate by voice or text, while playing games, said the Anticom chats were shut down in September once Discord was “alerted to activity in violation of our terms of service.” The company barred other white extremist groups off its servers in the aftermath of the lethal Unite the Right rally in Charlottesville in August. According to the spokesperson, Discord had not been in contact with any authorities, but would cooperate in any investigation should one be undertaken.

One Army manual shared by Anticom members offers step-by-step plans for creating fire bombs by adding chemicals to gasoline or other readily available fuels. But the documents go well beyond explosives. There are instructions on using military-type assault rifles and M249 machine guns, as well as hand-to-hand fighting techniques.

The chat logs also describe plans for engaging in violence at political events during the past year. In the days before an April 15 rally in support of President Donald Trump in Berkeley, California, one Anticom member promised the event would turn into a “bloodbath.” After the rally, which was marked by a series of brutal street battles between right-wingers and leftists, another Anticom member boasted of breaking a rival’s jaw in the fighting.