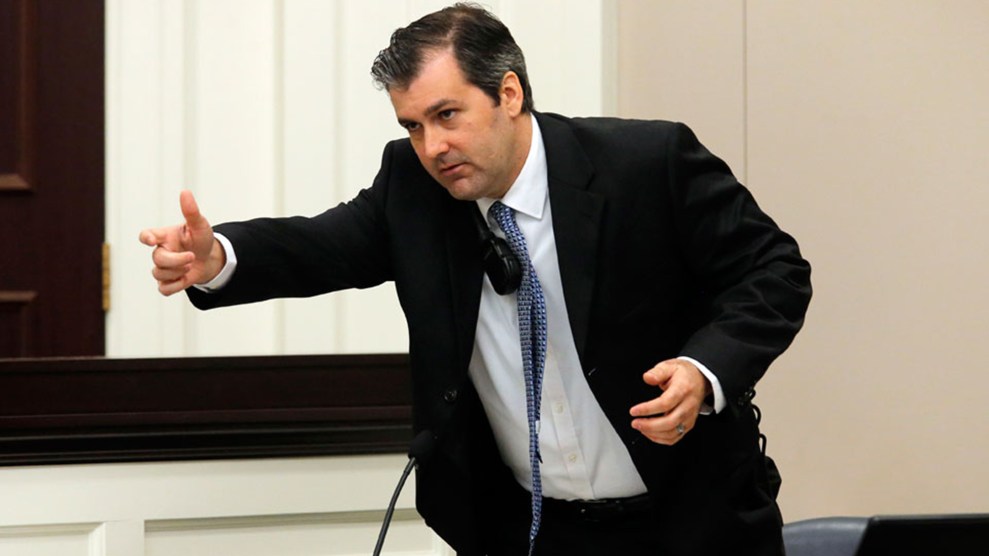 In a pre-sentencing memo obtained by CBS News on Monday, lawyers for Michael Slager—the former South Carolina police officer who pleaded guilty in May to federal charges of using excessive force and violating the civil rights of the late Walter Scott—invoke the testimony of Attorney General Jeff Sessions, who told congressional investigators he had poor recollections about his meetings with Russian contacts.

“The highlighted portions are particularly apropos…and in fact, could have been spoken by Slager himself.”

“The text below reflects the sworn testimony of Sessions in his opening remarks. The highlighted portions are particularly apropos to describe memory’s imperfections, and in fact, could have been spoken by Slager himself,” reads one section of the memo.

Slager’s murder trial, which resulted in a hung jury, was covered in depth by Michael Sokolove for Mother Jones. Sokolove got to know the families of the former North Charleston cop and his victim, Walter Scott, whom Slager shot five times in the back as he fled from a routine traffic stop in an incident that was caught on video and made national headlines.

Slager, Sokolove writes, claimed on the stand that he feared for his life—the standard police defense—even though the suspect was unarmed and fleeing:

“In my mind,” he said, “it was total fear.” Scott had grabbed his Taser, he insisted. (In the video, Scott is seen running away from Slager, without the Taser.) “I pulled my firearm and I pulled the trigger,” Slager testified. “I fired until the threat was stopped, like I’m trained to do.” … The adrenaline from the fight and the trauma of the shooting had impaired his recollections: “My mind,” he said, “was like spaghetti.”

Scott’s family, of course, wasn’t buying it. “He flat-out lied. He sat on the stand and lied. The whole world knows he lied,” said Walter’s younger brother, Rodney Scott.

In the memo, Slager’s lawyers argue otherwise, using Sessions as Exhibit A: “A failure to recall, or an inaccurate recollection, does not a liar make…. Like Sessions, Slager’s testimony has always been consistent with the memory he had at the time and he has responded to questions asked in the context of the Questions.”

In a followup post about the guilty plea, Sokolove wrote…

Slager was not under imminent threat. After the shooting, he appeared to plant evidence by retreating to where the scuffle had taken place to retrieve his Taser and then placing it beside Scott’s prone body. Slager described a different sequence of events in the hours after the shooting, but more recently he has testified that he has no memory at all of those interviews with investigators.

His memory loss could be viewed as a calculated strategy. Or, alternatively, as an indication of a defendant who was not in the best of mental states to withstand a new trial.

Slager’s sentencing is set for December 4. Prosecutors, citing the former officer’s dissembling and failure to accept full responsibility for what he did, are pushing for a punishment of life in prison. According to CBS News, legal experts predict he will most likely get 5 to 20 years.