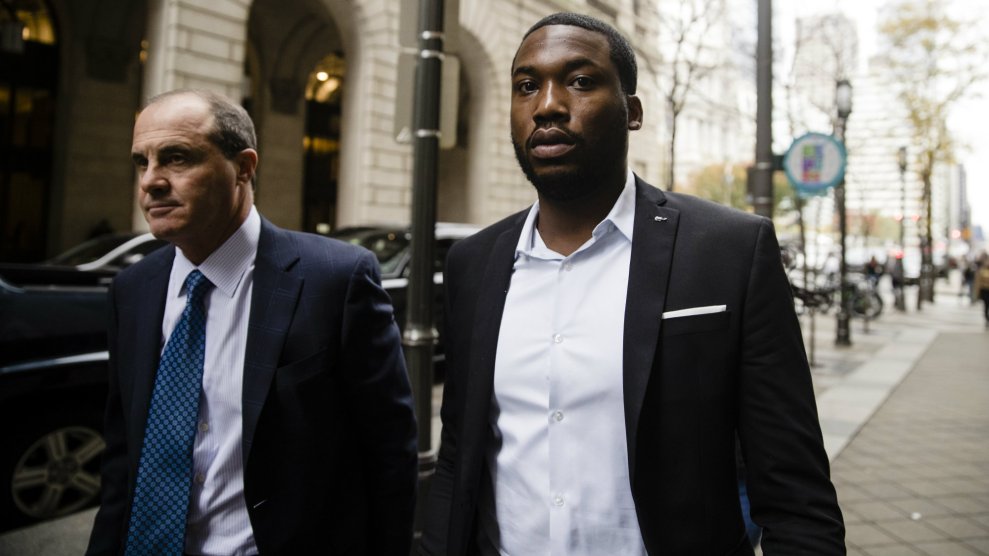 Celebrities and civil rights groups are rallying around 30-year-old Philadelphia rapper Meek Mill, who was sentenced to two to four years in prison last week after a judge ruled that he’d violated the terms of his probation, which stemmed from charges related to an arrest for carrying a gun to a local grocery store when he was 18. A lingering threat of punishment for relatively trivial probation or parole violations, his attorneys and supporters say, is an all-too-common outcome for black and brown people who come in contact with the criminal justice system.

The prosecutor and Mill’s probation officer had both asked the judge to spare him prison time.

Mill, whose given name is Robert Rihmeek Williams, was arrested twice earlier this year—once for being involved in a fight in a St. Louis airport (he was breaking it up, he says), and a second time for riding an illegal dirt bike in New York City. Prosecutors dismissed the charges in both cases, and both the prosecutor and Mill’s probation officer recommended to the judge during a probation hearing that Mill not be given prison time.

But Philadelphia Common Pleas Court Judge Genece Brinkey, who has overseen Mill’s case since 2008, wouldn’t heed those recommendations. She ordered him to prison, citing a failed drug test—Mill had previously been treated for opioid addiction—and violations of travel restrictions on account of his touring outside of Pennsylvania. (Mill served several months in prison in 2014 and 90 days on house arrest in 2016 for other violations.) Mill’s attorney says last week’s sentence is unduly harsh and that he plans to appeal it.

Sign the petition to overturn the blatant injustice on @Change #Justice4Meek https://t.co/RrM651vrXl ✊?✊?✊?✊?We wit u young King. Stay Up. This too shall pass. pic.twitter.com/APXMRoEZfZ

Several civil rights groups have now taken up the mantle, arguing that Mill’s sentence is the symptom of a justice system that disproportionately penalizes people of color and drags out their sentences with long periods of probation and/or parole. Mill initially served eight months in prison on the gun charge and then began serving a five-year probation term,  which Brinkley extended another five years for a probation violation.

Nationally, nearly 5 million people are on probation or parole—about a third of them black, according to the Bureau of Justice Statistics—on top of the nearly 2 million who are incarcerated. A Marshall Project survey published in April found that at least 61,000 of those people were in jail or prison for probation or parole violations. And one 2014 study found that black defendants can be up to twice as likely to have their probation revoked than white defendants.

“The public attention to Meek Mill’s case is an opportunity for all of us to demand broader reforms.”

On Monday, Color of Change and #Cut50, a criminal justice reform group founded by former White House policy adviser Van Jones, released statements slamming the sentence. “The public attention to Meek Mill’s case is an opportunity for all of us to demand broader reforms to our unjust criminal justice system,” said Color of Change director Rashad Robinson. “We need to be calling on local courts, judges, district attorneys, and state legislators to use their power to stop filling prisons with people who have committed minor probation and parole violations.” Hundreds of Mill’s supporters rallied outside the courthouse where he was sentenced to call attention to his case. Rapper Rick Ross and NBA legend Julius Erving were among those in attendance.

If you’re in Philadelphia today…. please come through to #Rally4Meek at 5pm!! Join us and @JuliusErving @cut_50 @JustineSkye & more pic.twitter.com/qHHkhsh9zD

Sadly there are Black folks going through the same radicalized injustice(s) within the justice system that Meek Mill has experienced for over a decade EVERY SINGLE DAY. This requires more than just gradual reform in laws—It requires a swift overhaul. pic.twitter.com/Mt13BwnIvJ

Philadelphia, which is among the 10 largest cities in America, has the highest incarceration rate. About one-third of Pennsylvania prisoners—and about half of the people in Philly’s jails—are there for violating probation or parole, not for new charges, according to Color of Change and #Cut50. But last Tuesday, Philadelphians elected Larry Krasner, a criminal defense attorney who ran as a reformer, as their new district attorney—his win was seen as a rebuke of the tough-on-crime ethos that has dominated city politics in the past.

In a bizarre twist, Page Six reported on Monday that the FBI is investigating whether Judge Brinkley attempted to extort Mill. The rapper’s attorney, Joe Tacopina, has said that Brinkley encouraged Mill to leave his management company and sign with a local agency run by one of her friends—she also allegedly asked him to give her a “shout out” in one of his songs. Color of Change and #Cut50 are circulating a petition calling for Brinkley to recuse herself from Mill’s case—or for her supervising judge to intervene.