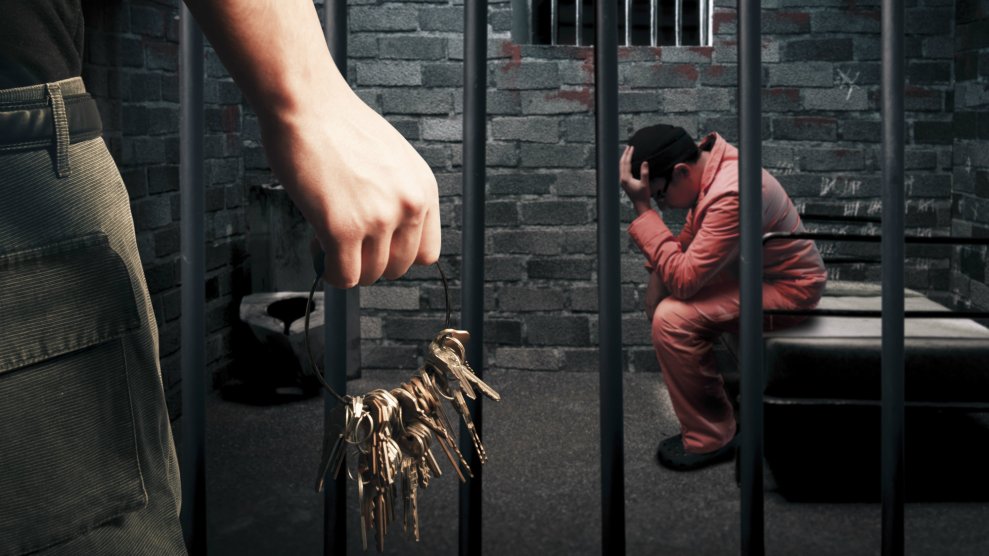 For some people arrested in East Baton Rouge Parish, Louisiana, posting bail is often not enough to get them out of jail. According to a new class action suit filed by the American Civil Liberties Union, the ACLU of Louisiana, and the Southern Poverty Law Center, the parish jail is requiring these arrestees to pay an organization that handles pretrial supervision services before being released. Attorneys argue this constitutes a violation of the Fourteenth Amendment, which guarantees equal protection, and the Fourth Amendment, which protects individuals from unreasonable searches and seizures.

The complaint alleges that some of those who have been arrested and held at the East Baton Rouge Parish Prison (a jail, despite its name) must pay Rehabilitation Home Incarceration—an organization that provides pretrial supervision services such as ankle monitoring—a $525 fee in order to be released from jail after bail is posted. During supervision, which may or may not have an end date, these individuals must pay monthly fees for ankle monitors that they often don’t receive, or for mandatory classes run by RHI employees that they often don’t even know about. If they’re unable to pay, the plaintiffs allege, they are threatened by RHI officials or East Baton Rouge Parish law enforcement officers with additional jail time.

If they’re unable to pay, the plaintiffs allege, they are threatened by RHI officials or East Baton Rouge Parish law enforcement officers with additional jail time.

RHI says it has supervised thousands of individuals in Louisiana since it opened its doors in 1993. RHI did not respond to request for comment.

According to the complaint, those who are arrested for criminal offenses in East Baton Rouge Parish are taken to the jail. The next day the arrested individual appears before a judge via closed-circuit television. This all occurs before trial or a conviction; these individuals are presumed innocent until proven guilty. In most cases, a judge has already set a bond and bond conditions before this hearing but may adjust them should the arrestee or the lawyer disclose relevant facts.

It’s not uncommon for courts to contract with private companies to monitor those who have been released on bail until their trial. These companies provide services such as ankle monitoring, taking classes, insuring the individual obeys any imposed curfews, and conducting drug tests.

The complaint alleges that the process in the courtroom of Judge Trudy White, a criminal court judge of the Nineteenth Judicial District Court of Louisiana, infringes on the rights of arrestees. As one of the judges in charge of setting bonds for arrestees, according to the complaint, Judge White typically does not allow the arrestee to bring up any issues that may affect bond conditions. She asks about the charges, informs the individual of the bond amount, and assigns supervision by RHI, without taking into consideration the individual’s ability to pay the fee.

Judge White’s office declined to comment for this story.

The suit also alleges that RHI requires that individuals remain in detention until the company receives confirmation that the initial fee to the company has been paid. If arrestees can’t immediately pay, they often languish in jail until they can.

Henry Ayo is a parish resident and is one of the plaintiffs in the complaint. In August 2016, he was arrested on suspicion of attempting to steal an air conditioning unit from a vacant home. The accused are not required to have representation at these hearings, and Judge White set his bond at $8,000 and assigned him to RHI for supervision. According to the complaint, the judge did not ask Ayo any questions about his case or permit him to ask her any questions after she explained the terms of the supervision. A few days after the bond hearing, an RHI official visited Ayo at the prison and informed him of the initial fee and the subsequent monthly payments.

The bail alone was too much for Ayo and his wife to pay, so he remained in jail for an additional two months while his wife saved up the $8,000 bail. After the bail bondsperson collected the money from Ayo’s wife, he informed her that before her husband could be released, she would need to make arrangements with RHI. An RHI employee told her that she had to pay another $500 in order for her husband to be released, including a $375 fee for the ankle monitor. RHI finally allowed Ayo to be released, but he was told that he would be under supervision for 90 days. According to the complaint, RHI never provided the ankle monitor even though they received $1000 total from Ayo and his wife.

Over the next six months, long after his supervision was supposed to end, Ayo and his wife scraped funds together to make small payments of $50 or $100 to RHI. Since Ayo was unemployed, his wife worked two jobs and sometimes paid RHI instead of their utilities. When Ayo’s case closed in February 2017, RHI said he still owed $200.

“This is what happens when the court system signs away your liberty to a company whose motive is to make money.”

“This is what happens when the court system signs away your liberty to a company whose motive is to make money,” says Buskey.

Kaiasha White, the other named plaintiff, has a similar story. After being arrested in August 2016 for simple and aggravated battery, Judge White set her bond at $4,000 and assigned supervision by RHI. White was unemployed and could not afford to make bail and pay the initial RHI fee, so she spent about one month in jail while her mother saved up to pay her bail. After she was released, an RHI official came to her home and told her that she’d be required to wear an ankle monitor, which, like Ayo, she says she never received.

As the months went by, White was unable to keep up with all the fees and lived in fear that she would be arrested. According to the complaint, she managed to make a payment but sent her son to deliver it. After that payment, an RHI official told White that she failed to pay for and take a class, which, she says, she was never informed of. Eventually, contact from her monitor stopped and she received a letter saying that he had left the company. RHI then began sending her letters saying she owed the organization $800. White cannot afford this payment, nor does she know if her supervision with RHI has ended.

One of the central issues in the complaint is that both the named plaintiffs paid to be supervised but say they received no supervision services. According to the complaint, supervisees are not required to report to their monitors, but must contact them by telephone multiple times a day. “[RHI] makes people afraid of going back to jail if they don’t pay the bill,” says Buskey.

Buskey says that the ACLU spoke with individuals who were rearrested after being unable to make RHI’s payments, but that they were wary of coming forward. For Ayo, White, and hundreds of others, he says, “justice should not be available only for a price.”