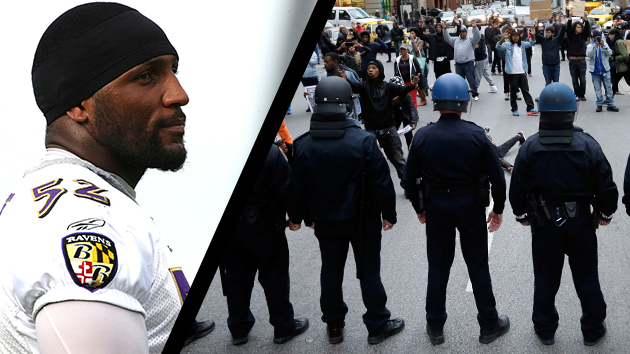 Athletes and celebrities have taken to social media to call for an end to the Baltimore riots that flared overnight after the funeral of Freddie Gray, a 25-year-old black man who died in police custody having suffered a spinal cord injury.

Ray Lewis, who played for the Baltimore Ravens for 17 years before retiring in 2013, posted this fiery speech to residents on Facebook on Tuesday, asking for peace: “Young kids, you gotta understand something. Get off the streets. Violence is not the answer. Violence has never been the answer.” (Ray Lewis was charged with murder in 2000 after a brawl in Atlanta, but those charges were later dropped.)

I’ve got a message for the rioters in Baltimore. #BaltimoreRiots

We all want Justice. And our city will get the answers we are looking for. My deepest sympathy goes out to the GRAY Family. To see my city in a State of Emergency is just shocking. We need to protect our city, not destroy it. What happens when we get the answers that we want, and the media attention is not there anymore? We go back to being the same ol Baltimore City again. If not yourself, then Think about the youth. How this will impact them. Let’s build our city up not tear it down. Although, we want justice, let’s look at the real issues at hand. For example, When was the last school built in Baltimore? That’s just one example. I know my community is fed up. I’m all about fighting for what we believe in. The anger, the resentment, the neglect that our community feels right now, will not change over night. Continue, fighting for what you believe in. But remember, it takes no time to destroy something. But, it can take forever to build it back up. Peace7. #Thisonehitshome #BeMore #LetsNotFallForTheTrap “Please Understand What State Of Emergency Mean”(Destroy and Conquer) #StayMe7o

Washington Wizards forward Paul Pierce also denounced violence, recalling the Los Angeles riots after the 1992 beating of Rodney King by police, which he witnessed as a teenager in Inglewood, California:

Having witnessed the LA riots first hand I know this is not the solution. Baltimore Stop the Violence!

Comedian Cedric The Entertainer, who was born in Jefferson City, Missouri, linked the upheaval to what happened in Ferguson (near his hometown), after the death of Michael Brown, a young unarmed black man shot and killed by white police officer Darren Wilson.

Hate to see Baltimore going thru what my hometown of Ferguson went thru. Change is necessary, but violence and destruction is not the answer

At least 15 police officers were injured in Monday’s riots. On Tuesday morning, about 2,500 residents responded, sweeping debris throughout the city left in the wake of buildings destroyed by fires and looted businesses.