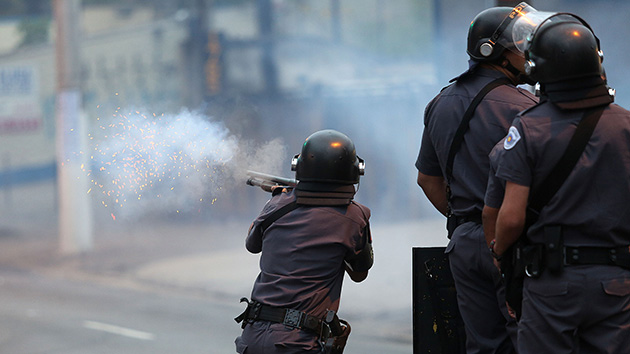 The high-profile killings of figures like Ferguson, Missouri’s Michael Brown have stirred a national conversation about police brutality as of late. But it turns out the Americas’ second biggest economy struggles with this issue on a much greater scale: Brazil’s police killed more than 11,000 civilians between 2008 and 2013; on average, a staggering six people every day. This jaw-dropping number was released today in a Brazilian Public Security Forum (BPSF) report which rounds up statistics illuminating the country’s struggles with public safety. To put the figure in context, it took police in the United States 30 years to kill the same number of civilians, despite the fact that there are at least 50 percent more people in the US.

Sao Paulo in particular has seen an increase in civilian deaths at the hands of the authorities. Between January and September of 2014, officers killed 478 people during confrontations, twice as many victims as during that same period last year. The uptick parallels an increasingly lawless criminal culture, say authorities. “Rather than turn themselves in to the police, criminals prefer to open fire,” Sao Paulo police department’s Jose Vicente da Silva told the AP. “That is what is causing the increase.”

“Unfortunately, we are a country where police kill more and die more.”

Many of Brazil’s police killings happen in the predominately black favelas of Rio de Janeiro, where there’s been a heightened military presence, in part to try and pacify the area for the World Cup and 2016 Olympics. Brazilian journalist Juliana Barbassa, who’s writing a book on the issues feeding Brazil’s massive national protests, described this tension when she spoke with my colleague Ian Gordon in July. When more police entered Rio’s slums, “at the beginning there was this real hope that they could do something,” Barbassa said; for one, break up the drug rings controlling the community. But then “you’ve got military police fully armed, in your community 24/7, regulating things like when you can have parties—it’s not without its serious problems.” Barbassa explained that the city has seen some “very ugly cases of abuse of power,” including authorities torturing and killing civilians and then hiding the bodies. “To see these things happen, with this freshly trained, specifically chosen group of officers, really helped unravel a little bit the expectations and hopes that people had.”

While the BPSF report paints a grim portrait of police use of force in Brazil, it also reveals how officers themselves suffer at the hands of the country’s rampant violence. While fewer officers died on duty in 2013 than in 2012, many more were killed (from non-natural causes) on their off-hours: In 2013, 369 policemen perished while off-duty, compared to 191 just two years earlier. BPSF researchers note that it’s tricky to pinpoint exactly why officers are being targeted outside of work, but in some parts of the country, killing a cop is a gang rite of passage.

“Unfortunately, we are a country where police kill more and die more,” BPSF’s researchers write. They later conclude: “Death should be understood as taboo, and not an acceptable outcome of security policy.”