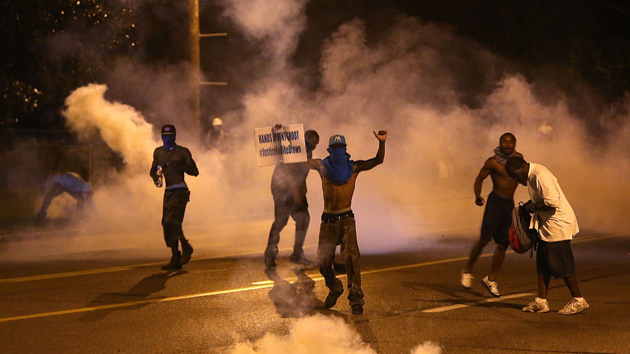 On Saturday, a police officer in Ferguson, Missouri gunned down unarmed black teenager Michael Brown. Eyewitnesses say Brown was killed while trying to run away or surrender, but Ferguson police claim that Brown reached for the officer’s gun. It will be a long time before all the facts are sorted out, but research suggests that such claims may be rooted in something deeper than the need to explain actions after the fact: Race may literally make people see things that are not there, whether it’s a gun or a reach for a gun.

In a 2001 study, participants were shown a picture of a white face or a black face followed immediately by a picture of a weapon or a tool. They were asked to identify the object as quickly as possible. Study participants more often identified weapons correctly after they saw a black face, and more accurately identified tools after seeing an image of a white face. What’s more, “they falsely claimed to see a gun more often when the face was black than when it was white,” the report’s author wrote. He goes on:

Race stereotypes can lead people to claim to see a weapon where there is none. Split-second decisions magnify the bias by limiting people’s ability to control responses. Such a bias could have important consequences for decision making by police officers and other authorities interacting with racial minorities. The bias requires no intentional racial animus, occurring even for those who are actively trying to avoid it.

This study has been repeated by several different groups of scientists with the same results. (When participants are primed with female as opposed to male African-American faces, however, they are less likely to assume the object is a gun.)

A 2005 study by University of Colorado neuroscientists bolsters these findings. The scientists measured threat perception and response in the brains of 40 students to targets in a video game, some of whom were carrying pistols while others carried wallets or cellphones. The study authors predicted that because there is a cultural perception that African-Americans are “more threatening,” participants’ “shoot response” would come more naturally. Indeed that’s how it panned out. The study found that the students shot black targets with guns more quickly than white targets with guns, and took longer to decide not to shoot unarmed blacks than unarmed whites.

We may never know what was going on in the head of the officer who shot Brown—or, for that matter, in the heads of George Zimmerman or Michael Dunn, or many other killers of unarmed African-Americans in disputed situations. But studies like the above suggest that the underlying problems run deep.