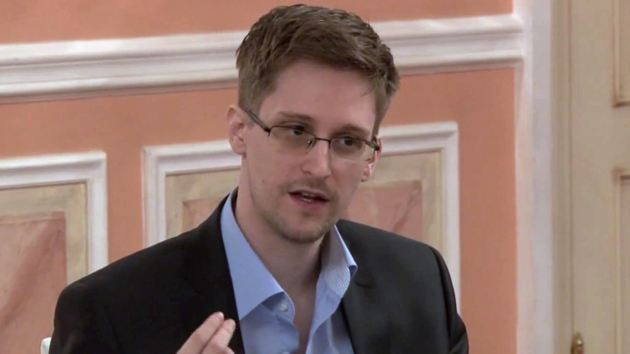 So you’re in the middle of the biggest secrets-blowing caper in the history of the known universe. You’re one of a small number of people who have access to the most classified information about the most classified spying programs of the most powerful superpower—and you’re swiping tens of thousands of pages of these secrets and preparing to hand them over to journalists. You’ve already made contact with your recipients—and it was harder than you thought to do so. You’ve switched jobs, moving from one contractor to another, in order to snatch more of the documents you want revealed to the unknowing public. You’re scraping NSA servers. You’re watching your back. Oh damn, you are certainly watching your back. You know the people you work for can monitor who gets in and out of the system, and though you are one of the few with the keys to the crypt, you have to be worried—scratch that, paranoid, and rightfully so—that someone’s going to wise up. You make a slip—they might be watching right now—and the alarms go off. And it’s no more Hawaiian paradise. It’s federal prison. But you’re committed. You have your plan. You’re about to send a security kit to an American reporter who lives in Brazil and works for a British outlet so you can communicate via a safe and encrypted mechanism. You’re keeping all of this secret from your live-in girlfriend. You’re thinking about your getaway. Iceland, maybe Iceland. You know that you are engaged in risky business. You could end up changing the world. You could end up dead. Yes, dead. On the run, some times things happens. It’s possible. Oh, what was that sound? Did something weird just happen with your laptop? Did a strange car drive past the house not once but twice? Man, this is intense.

And in the middle of this adrenalin-laced stretch—on April 5, 2013, a mere weeks before you start slipping that journalist top-secret docs exposing the USG’s biggest secrets and then head to Hong Kong to meet him and his compatriots—you send an email to the NSA’s general counsel’s office, posing a rather prosaic query. One question: Why?

Today the NSA released an email Edward Snowden sent its general counsel on that date. The spy agency was responding to NBC News reporting that it had confirmed that the NSA had received an email from Snowden before he leaked all those documents expressing “policy and legal” concerns. This report seemed to bolster Snowden’s claim that he had alerted intelligence officials of his profound concerns about the NSA’s extensive surveillance programs before taking matters into his own hand and becoming a whistleblower. But when the NSA put out the email—claiming it was the only communication of this sort it had received from Snowden—there was a surprise: Snowden had not contacted the NSA’s top lawyers about possible abuses within the NSA. He had asked questions regarding information in a training course. The course had covered the “Hierarchy of Governing Authorities” for federal action. At the top of the chain was the US Constitution. Right below were federal statutes and presidential executive orders. Snowden wanted to know which of the two ranked higher. “My understanding is that EOs may be superseded by federal statutes, but EOs may not override statute,” he wrote. ” Am I incorrect in this?” And he had a similar question about Pentagon regulations and Office of Director of National Intelligence (ODNI) rules.

That was it. A simple query about training material.

Someone in the general counsel’s office—the person’s name is redacted—replied quickly and informed Snowden that EOs cannot override a statute and that Defense Department and ODNI regs “are afforded similar precedence.” This NSA official helpfully added, “Please give me a call if you would like to discuss further.” Apparently, if the NSA is to be believed, Snowden was satisfied and did not follow up.

Why would a fellow currently mounting a significant penetration of an intelligence agency choose on his own to contact the lawyers for that agency and ask these questions? Why did he care about this? Why would he want to be on their radar screen at all at this time? Was he trying to establish some sort of paper trail? Was he worried that he had left a clue somewhere about his ongoing operation and thought such a note would divert attention?

This is a puzzler. Snowden comes across as a smart and thorough fellow who sure knows how to plan well. But how does this email fit into the plan? Marcy Wheeler suggests that Snowden was trying to get the NSA lawyers to admit that the agency saw EOs as top dogs (to prove, in a way, that the NSA was using one particular EO to trump laws that might limit its surveillance activities). Until Snowden explains this email himself, it’s hard to know if this is correct. If so, Snowden would be even a cooler cucumber. It’s hard to imagine a fellow who’s about to sabotage an entire intelligence community deciding that this is a good time to play mind games with the lawyers at the NSA and possibly draw notice. In all his interviews, Snowden hasn’t mentioned that he sought to squeeze this kind of secret out of the NSA as he was filling up disk drives with its most sensitive documents.

So here is a new question about Snowden. And the question remains: whether (and how) Snowden tried to go through channels before going to Greenwald and the Washington Post.

The ACLU, which represents Snowden, says of this email controversy, “This whole issue is a red herring. The problem was not some unknown and isolated instance of misconduct. The problem was that an entire system of mass surveillance had been deployed—and deemed legal—without the knowledge or consent of the public. Snowden raised many complaints over many channels. The NSA is releasing a single part of a single exchange after previously claiming that no evidence existed.” (Mother Jones asked the ACLU if it could share more of this email exchange, and it said it didn’t “have any other info.”)

Yes, the big picture is still there: How far over the line did the NSA go with its surveillance programs, and what ought to be done about that? But Snowden’s tale is also captivating, and the release of this email today adds to the mystery.

UPDATE: Several hours after the NSA released the Snowden email, Snowden told the Washington Post, “Today’s release is incomplete, and does not include my correspondence with the Signals Intelligence Directorate’s Office of Compliance, which believed that a classified executive order could take precedence over an act of Congress, contradicting what was just published. It also did not include concerns about how indefensible collection activities—such as breaking into the back-haul communications of major US internet companies—are sometimes concealed under EO 12333 to avoid Congressional reporting requirements and regulations.”

Snowden insisted that he had tried to work within the system: “If the White House is interested in the whole truth, rather than the NSA’s clearly tailored and incomplete leak today for a political advantage, it will require the NSA to ask my former colleagues, management, and the senior leadership team about whether I, at any time, raised concerns about the NSA’s improper and at times unconstitutional surveillance activities. It will not take long to receive an answer.”

Snowden said there were other relevant emails (presumably sent to the NSA) “not just on this topic. I’m glad they’ve shown they have access to records they claimed just a few months ago did not exist, and I hope we’ll see the rest of them very soon.” He maintained, “I showed numerous colleagues direct evidence of programs that those colleagues considered unconstitutional or otherwise concerning. Today’s strangely tailored and incomplete leak only shows the NSA feels it has something to hide.”

If Snowden did have more extensive correspondence with the NSA, he and/or the agency should be able to resolve the question of what he sought to do before revealing the NSA’s most important secrets..