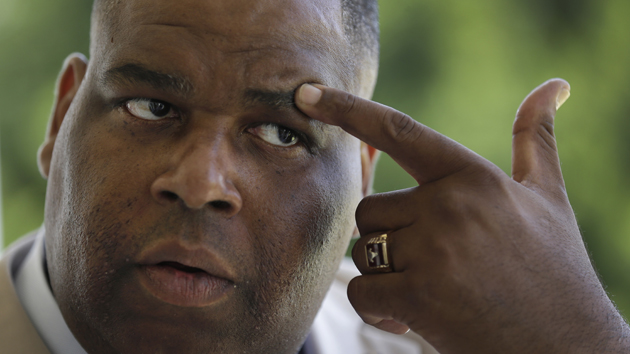 During last week’s memorial service for victims of April 2 Fort Hood shooting, President Barack Obama spoke about the lingering hurt from the previous attack on the base in 2009. “Part of what makes this so painful is that we’ve been here before,” Obama said. “This tragedy tears at wounds still raw from five years ago. Once more soldiers who survived foreign war zones were struck down here at home, where they’re supposed to be safe.” Yet, when victims of the first Fort Hood shooting invited the president to see those wounds up close, he refused, without explaining why.

The morning of the memorial, retired Staff Sgt. Alonzo Lunsford, who was shot seven times during the 2009 Fort Hood rampage, requested that Obama meet briefly with victims and their families while he was on base. Lunsford’s letter, which was addressed to the president’s chief of staff, Denis McDonough, also described survivors’ disappointment with how they had been treated:

As you may know, the President and high-ranking members of the military promised me, my family and the other Fort Hood terror attack survivors that the federal government would “make them whole.” After more than four and one-half years, however, the government has yet to make good on this promise.

We believe that if the President could hear, first-hand, our plight and our mistreatment at the hands of his bureaucracy, that he would take the steps needed to set things right. Therefore, we ask for ten minutes of his time.

In the years since Major Nidal Hasan opened fire in a crowded Fort Hood medical center, killing 13 people and wounding another 32, victims have struggled to get medical care and financial benefits. This is largely because of how the incident has been labeled. Although Hasan is an avowed jihadist with ties to Al Qaeda, the Pentagon considers the attack to be workplace violence rather than terrorism or combat. Thus victims aren’t eligible for many benefits and honors available to soldiers wounded or killed in action. (For more on this topic, see “The White House Broke Its Promise to the Victims of the First Fort Hood Shooting. Will History Repeat Itself?”)

In 2012, nearly 150 Fort Hood victims and their family members filed suit against the Department of Defense, seeking compensation for their suffering and lost benefits. But the case has bogged down, and the Senate has balked at passing legislation that would give victims of the 2009 shooting the same benefits as soldiers killed or wounded in combat or terrorism attacks.

Lunsford and other survivors had hoped that a personal meeting might persuade the president to intervene and break the logjam. “Right now, he only knows our stories second hand,” Lunsford says. “We wanted to meet with him face-to-face so he could look us in the eyes and see our pain. That’s the only way he’s really going to understand our situation.” According to their lawyer, Reed Rubinstein, roughly two dozen victims and their relatives were planning to attend. But they didn’t hear back from the White House until the day after the memorial, when McDonough sent a brief reply:

After receiving your letter yesterday, and consulting with the White House Counsel’s office, we forwarded your letter to the Departments of Justice and Defense, who are leading the government’s efforts to ensure the victims of the 2009 shooting receive the justice and benefits they deserve. Unfortunately, we were unable to meet your specific request for a meeting with the President yesterday.

White House spokeswoman Caitlin Hayden declined to say why the president had demurred, but Lunsford isn’t surprised. “Honestly, I expected to get that kind of response,” he says. “The last five years has been so full of disappointments, it’s not like I’m sitting around holding my breath.”

You can read the entire exchange between Lunsford and the White House below.