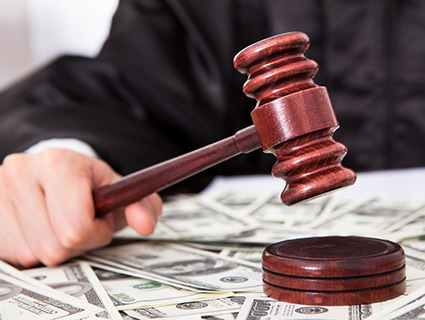 A new investigation by the Center for Public Integrity reveals troubling conflicts of interest in state supreme courts nationwide. CPI combed through the financial disclosure forms of state supreme court justices in all 50 states and reviewed the states’ disclosure laws for judges. Their findings on both fronts are discouraging.

CPI discovered several instances of justices writing opinions that favored companies they had financial ties to. An Arkansas justice ruled in favor of a company that had been paying his wife a salary of as much as $12,499 for two years. A high court judge in California ruled in favor of Wells Fargo despite owning up to $1 million of the bank’s stock—even as a colleague who owned less stock recused himself. Other justices accepted perks from lawyers —from country club memberships to a $50,000 Italian vacation.

Uncovering such information is exceedingly difficult because most states’ disclosure laws for judges are pretty weak. While federal judges are required to recuse themselves from cases if they or a family member own even a single share of stock in a company involved, state laws are murky and inconsistent. CPI devised a system for grading the state standards for preventing these kinds of conflicts of interest: 43 got a D or lower.

Check out some of CPI’s finds below: Some recent examples of state supreme court justices weighing in on cases involving companies in which they or their spouses owned stock, and a list of the freebies thrown at top judges.

Case: A securities-fraud lawsuit brought by a group of shareholders against the company.

Case: 3M petitioned the Alabama Supreme Court for a change of venue for a case in which landowners accused the firm of polluting their property with dangerous chemicals.

Case: Denied an appeal to a couple accusing Wells Fargo of predatory lending and unlawful foreclosure.

Owned stock in: Idexx Laboratories. About $28,300 held by his wife.

Case: The company was involved in a land dispute between a local quarry operator and the city.

Owned stock in: Bank of America. “Several hundred shares” according to a court spokeswoman.

Case: The bank was accused of unfair and deceptive business practices as a trustee on leased land in Chatham.

Owned stock in: Deutsche Bank. Amount not disclosed, but at least $1,000

Case: Disputing the bank’s foreclosure on a home.

Case: Whether out-of-state lawyers representing a mother whose baby died should have been allowed to try a case against the hospital and Abbott, which made the formula the baby drank.

Case: Upheld a lower court’s ruling in a foreclosure case, thus finding that Wells Fargo did not need to present an original note showing their ownership of the mortgage in question.

If it may please the court

Justice Robert Thomas, Illinois: For the last three years, he reported honorary memberships to two country clubs. He has received “Notre Dame tix” from his friend and personal attorney.

Chief Justice Bernette Johnson, Louisiana: In 2012, she accepted a $9,466 junket to France from the Louisiana Association of Defense Counsel (LADC) to attend their annual legal education courses.

Justice Greg Guidry, Louisiana: Guidry also took a trip to France sponsored by the LADC. In 2011, the group flew him to Buenos Aires for its annual meeting.

Justice Ron Parraguirre, Nevada: Last year, he received a $250 gift from a registered lobbyist for Barrick Gold. Less than two months later, the Nevada Supreme Court decided to hear a case regarding one of the company’s mines. (It’s still pending.)