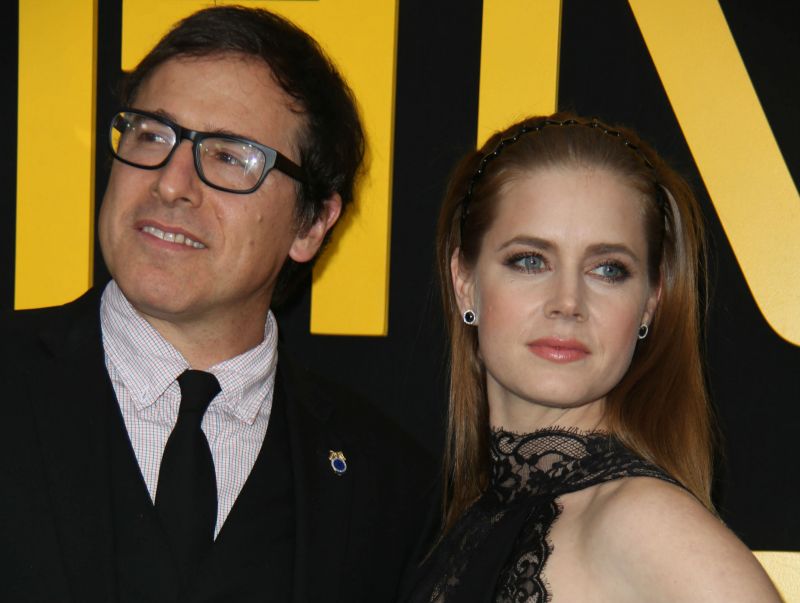 On Tuesday, the famously mercurial writer/director David O. Russell was in Washington, DC, for a special screening and Q&A session for his critically acclaimed, award-winning new film American Hustle. MSNBC host Chris Matthews moderated the Q&A, and Chris Dodd (the former Democratic senator and current chairman of the Motion Picture Association of America, the de facto censorship board for cinema in the United States) introduced Russell.

American Hustle—starring Christian Bale, Bradley Cooper, Amy Adams, and Jennifer Lawrence—is loosely based on events surrounding Abscam, a sting operation the FBI launched in the late ’70s to target trafficking in stolen property. The bureau recruited con artist Melvin Weinberg to help craft and execute the operation, which involved setting up Abdul Enterprises, a fake company funded by fictitious Arab sheiks who offered to bribe people to pave the way for a new casino in Atlantic City. The operation morphed into an investigation of political corruption when politicians started approaching Abdul Enterprises for money. By the early ’80s, Abscam had led to the conviction of one senator and six congressmen, among other political figures and officials. (The late Democratic congressman and Vietnam War vet John Murtha was also embroiled in the scandal, but escaped indictment and prosecution.)

In Russell’s fictionalization (built off of a script originally titled American Bullshit), the FBI bribes the mayor of Camden, played by Jeremy Renner, with a briefcase filled with $75,000 in cash. (In real life, the bribe was $50,000.) But at Tuesday night’s Q&A, Russell contended that the corruption dramatized in his film pales in comparison to what has legally occurred on the American political scene ever since the Supreme Court’s Citizens United decision in 2010.

“Seventy-five thousand dollars in a briefcase is very innocent by today’s standards, where the Supreme Court has made legal hundreds of billions of billions of dollars [in unlimited election spending]—I don’t even know where they come from, or where they go, or what people are getting for that,” Russell said. “It’s beyond all of us…So these guys are like small potatoes compared to that.” [Ed. note: It’s not literally “hundreds of billions.”]

Still, the 55-year-old filmmaker remains optimistic. “I grew up loving this country, and I don’t believe in cynicism,” Russell said. “It’s no fun. I prefer the passion.”

On top of this latest movie based on the Abscam operation, Russell has also directed a Gulf War heist movie (Three Kings) and a film based on the true story of professional-boxing brothers Micky Ward and Dicky Eklund (The Fighter). I asked him if he has seen anything in the news that he thinks would make a good project or be ripe for fictionalization. (David O. Russell presents Citizen Snowden? David O. Russell’s Benghazi Freak-Out? Or I Heart Mike Huckabees, maybe?) For now, nothing in the news seems to be tickling his fancy.

“If you have any good ideas, please tell me,” he replied. “Because they’re not easy to come by. I love great characters, I love stories of some kind of heart and redemption…[and] they’re hard to come by.”

Russell may have already found his next hard-to-come-by story—one from the 1960s. Earlier this year, Showbiz411 reported that Russell was working with Leonardo DiCaprio to adapt Legacy of Secrecy, a 2009 book written by Lamar Waldron and liberal commentator Thom Hartmann. The book presents Waldron and Hartmann’s case for the conspiracy theory that mob bosses were behind the JFK assassination. When Matthews asked during the Q&A about whether he’s making a JFK picture, Russell would not confirm or deny his involvement with the project, but did say that he is “kind of fascinated” by President Kennedy and his assassination.

UPDATE, December 19, 2013, 3:45 p.m. EST: On Thursday, a spokesman for the Motion Picture Association of America (MPAA) sent me an email taking exception to my characterization of the MPAA as a “de facto censorship board” for film. “The ratings are a voluntary system, created to inform parents of a film’s content so they can decide whether or not their kids should see it,” he wrote. “Filmmakers are free to include or exclude content at their discretion, and of course, can chose not to submit their film for a rating at all.”

The MPAA disputes the characterization that it is, in effect, a censorship board. For a look at the MPAA and its critics, you can watch Kirby Dick’s 2006 documentary This Film Is Not Yet Rated.