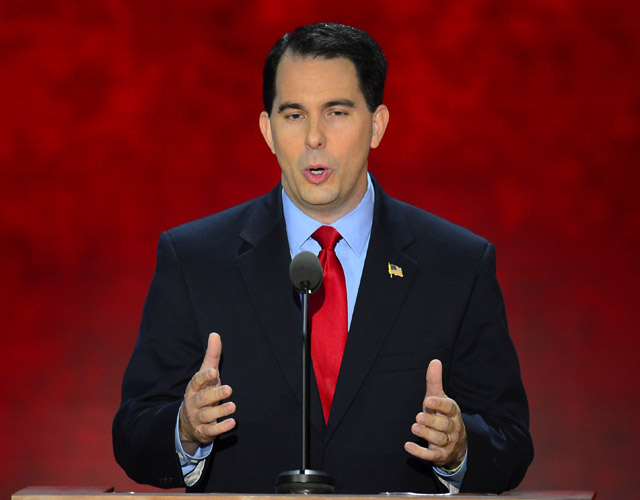 Since Walker’s election in 2010, the Badger State has been roiled by legislative battles over workers’ rights, labor-led protests, recall elections (including one targeting Walker himself), and a secret “John Doe” investigation lasting three years that resulted in the criminal convictions of three Walker aides, a Walker campaign donor, and a Walker appointee. Walker repeatedly denied that he was a target of that probe, and it ended in March without directly impacting him.

Guess what? There’s a new “John Doe” investigation making the news in Wisconsin and putting political operatives on edge.

As the Milwaukee Journal Sentinel‘s Dan Bice reports, the new probe is looking into potential campaign law violations during Wisconsin’s recent run of recall elections. Six state senators faced recall elections in August 2011, and Walker and his lieutenant governor were recalled in the spring of 2012. At this point, anyone involved in the recall elections—including Walker and his opponent in last year’s gubernatorial recall, Milwaukee Mayor Tom Barrett—could be implicated. A source also told Bice that investigators have set their sights on at least five counties throughout the state, including Dane County, which includes Madison, the state capital.

Sources said the investigation is following up on a number of leads turned up by an earlier John Doe probe, which was led by Milwaukee County District Attorney John Chisholm into the former and current aides of Gov. Scott Walker during his time as Milwaukee County executive.

A John Doe probe functions much like a federal grand jury, allowing prosecutors to conduct searches, subpoena records and other material, and take testimony under oath from witnesses—all in secret.

It appears the state-related case opened in February 2012, meaning it was active at the same time as the one focusing on Walker’s county aides.

However, several sources said they became aware of the newer probe only in the past month and that much of the recent activity has taken place in Madison.

Sources familiar with the probe told the Journal Sentinel that it was scrutinizing a wide variety of state-related issues, including the recall races. Sources suggested the probe is looking at a current legislative leader and the governor’s contest.

“This is activity that occurred since the 2010 election,” said a source.

Barrett, the Milwaukee mayor, tried to use the first John Doe investigation as a bludgeon in the 2012 recall election, accusing Walker of corruption and wrongdoing. That strategy didn’t work: Walker handily defeated Barrett. Walker has declined to comment on the new probe. “This is the first I’m hearing of it,” an aide to Barrett told the Journal Sentinel.

The new John Doe probe, led by Francis Schmitz, a federal prosecutor with 30 years’ experience, is at least a nuisance for the Walker administration, which has seemingly spent as much time dealing with political headaches as actual governing. Expect more revelations to dribble out about whom investigators are targeting and what they allegedly did wrong.