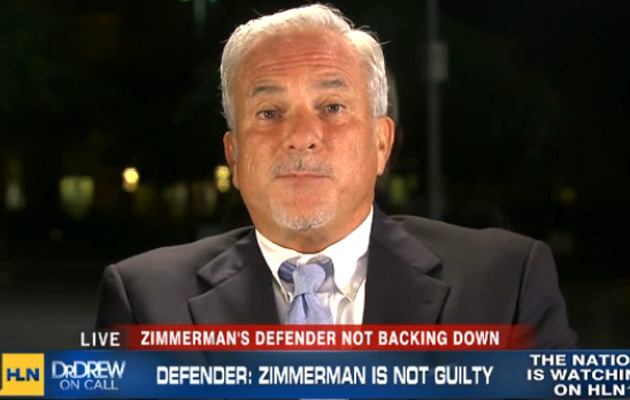 Yesterday, after George Zimmerman was taken into custody for allegedly threatening his estranged wife with a gun, HLN turned to a familiar source for commentary: Zimmerman’s neighbor and de facto media emissary, Frank Taaffe. In an interview with HLNTV.com reporter Graham Winch, Taaffe argued that Zimmerman was distraught because his wife, Shellie, was trying to take his Rottweiler. “Now, that’s pretty vindictive,” Taaffe said.

Ever since Zimmerman killed Trayvon Martin, an unarmed black teenager, with a bullet to the heart, Taaffe has been his staunchest and most visible defender. As Mother Jones has reported, Taaffe also happens to be an ardent racist. And he now has a new forum to air his inflammatory views.

Following Zimmerman’s July acquittal on murder charges, Taaffe appeared on two episodes of the white-separatist podcast, The White Voice, and unleashed a string of racist diatribes. At the time, he claimed that he had gone on the show in response to a routine interview request. “I was invited,” he told Mother Jones. “End of story.” But in mid-August Taaffe teamed up with The White Voice‘s cohost Joe Adams, a white-power activist who has authored racist screeds such as the Save the White People Handbook, to launch a new weekly white-power podcast called Standing Our Ground.

The program, which bills itself as a show for “THE SUPPRESSED MASSES,” features news and pop-culture commentary with a white-separatist slant. (Taaffe embraces this label, which he sees as less derogatory than others. As he told listeners recently, “We might be white separatists but we are not supremacists.”) From this platform, Taaffe also weighs in on other racially charged cases, including that of Michael Dunn, a Jacksonville man who fatally shot an unarmed black 17-year-old after an argument that began over loud music.

On the September 4 episode, Taaffe and Adams debated whether the United States should bomb Syria and how to ease the financial burden of housing America’s minority-heavy prison population. Taaffe’s solution: “Supply these guys with a free rope and a pedestal.” Taaffe also addressed the speculation over how he knew the sequestered jury was split 5-to-1 during deliberations in the Zimmerman case. “All the Tray-bots are out there scratching their nuts—their camel nuts—trying to figure out how the hell I knew that,” he scoffed. “And guess what: They’ll never know.”

On another episode Taaffe and Adams broached interracial marriage. Adams said he hoped that all women who married black men would meet “the same fate as Nicole Brown Simpson.”

“I don’t want to see that happen to them,” Taaffe replied. “But…like I always say, you lie down with dogs you’re going to get fleas—especially if they’re black dogs.”

Taaffe has a history of making racially charged statements. In 2012, for example, he posted a message to his private Twitter feed (@pinsones) saying, “the only time a black life is validated is when a white person kills them.” Nevertheless, in the year and a half between Trayvon Martin’s death and Zimmerman’s acquittal, Taaffe became a mainstream media sensation, with numerous newspaper interviews and more than 70 primetime television appearances under his belt. CNN’s sister network, HLN, allowed him to weigh in on virtually every aspect of the Zimmerman case, from legal strategy to the implications of forensic evidence.

Taaffe used his media megaphone to cast Martin as a hoodlum and Zimmerman as a do-gooder who was trying to protect his neighborhood. As Mother Jones has reported, he also used it to spread racial animus:

He told the New York Times that his gated community had been burglarized by “Trayvon-like dudes with their pants down” and taunted his black fellow talk show guests with race-tinged jibes. On a recent episode of HLN’s Dr. Drew on Call, the topic turned to racial profiling. Taaffe shouted down a fellow panelist and launched into a bizarre diatribe: “You know, Whitey, us…we’ve had a little bit of slavery, too,” he said. “Back in 1964 or 1965, then-President Johnson signed an executive order; it was called affirmative action. And you want to talk about slavery?”

Now that the Zimmerman trial is over, Taaffe has turned his attention to Michael Dunn, who is facing first-degree murder charges for fatally shooting another unarmed black 17-year-old. Taaffe discussed the case on the inaugural episode of Standing Our Ground, which aired August 14. And he sounded a familiar refrain, painting Davis as a ruffian (“He got in many altercations, fisticuffs, and fistfights with fellow students”) and Dunn as a decent citizen who killed in self-defense. Adams interjected that “most of these things” would not be happening if white people had their own country. “We fail to ask the question, why is it that there are paranoid men around young black men?”

“Why are we paranoid of young black males with hoodies walking around in the rain?” Taaffe replied. “There’s a reason. Fifty percent of all violent crimes are committed by young black males.” Taaffe’s comments are more than a little ironic, given the length of his own rap sheet. (You can find more about that here, here, here, and here). Nevertheless, listeners were taken with his bravado. “I am so thankful for someone like you and having the balls to say what everyone thinks,” said one caller. “Please don’t ever quit.”