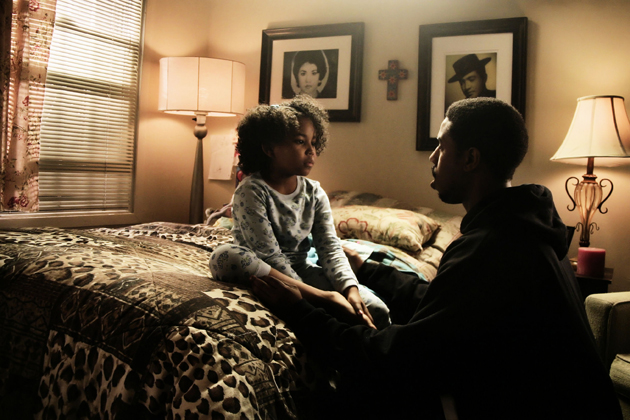 The tears had not yet dried, but immediately upon exiting Theater 15 at San Francisco’s AMC Metreon for a screening of Fruitvale Station, each of us was handed a business card. On one side: an image of Michael B. Jordan (playing Oscar Grant) embraced by Ariana Neal (playing Grant’s daughter Tatiana). On the other side: a message encouraging us to channel our newfound rage, confusion, and sadness to fix the injustice we just witnessed on screen.

Call it insensitive, or call it smart marketing, but the Weinstein Company is hard at work making Fruitvale Station more than just something to watch while munching on popcorn. They’re engaged in a campaign to raise awareness about social injustice. 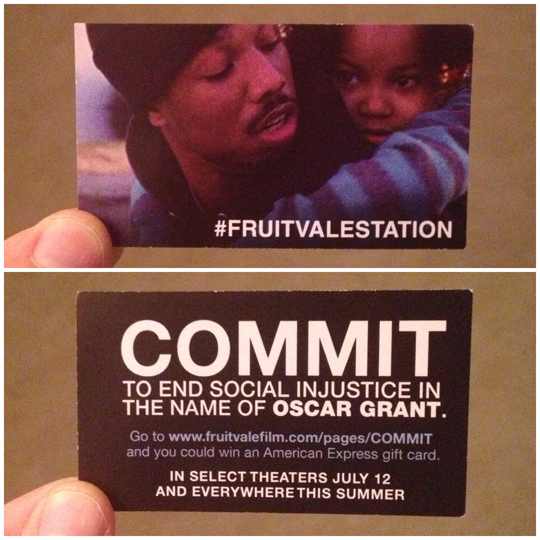 Just after midnight on January 1, 2009, Oakland resident Oscar Grant was riding home from San Francisco on the BART (Bay Area Rapid Transit), when he became involved in an altercation. The train stopped at Fruitvale Station and transit officers responded to the scene. While attempting to restrain Grant, officer Johannes Mehserle shot him in the back. A few hours later, Grant, the 22-year-old father of a 4-year-old girl, died at Highland Hospital.

Numerous cellphone users captured the scene and uploaded their videos. Bay Area residents were incensed and protests erupted. Officer Mehserle later testified that instead of grabbing a Taser, he mistakenly grabbed his gun. Mehserle was charged with murder, but a jury only found him guilty of involuntary manslaughter. He was released after 11 months in prison.

The story of Oscar Grant left a painful scar on the Bay Area, and a literal one on the floor tile where he was killed. During filming of Fruitvale Station, Jordan found a bullet hole where Grant was shot. “I remember putting my chest to the hole and being scared while I was shooting that scene,” he told the Los Angeles Times. The hole was later filled by BART officials, but Jordan told the paper, “There’s energy at that spot—people know it and what happened there. And oftentimes, people won’t stand at that end of the platform.”

Director Ryan Coogler helms this story of Grant’s final day, and included in his retelling is a brutally visceral recreation of what happened that New Year’s morning on the platform.

Coogler grew up near Oakland, and at the time of the shooting he was home on break from film school. He recently told the New York Times, “When we saw that happen to Oscar, and we saw it on video, it was like the wind getting knocked out of us. I was questioning who we were as a community.” Soon after the shooting, Coogler decided to make the film.

It’s beautifully and subtly acted by Jordon, Melonie Diaz (playing Grant’s girlfriend and mother of his daughter), and Octavia Spencer (playing Grant’s mother). Meanwhile, the other cast members come across so natural and real it’s as if we’re peeping through a key hole at an real-life family in the kitchen. This level of comfort makes Grant’s death feel personal, leaving you rooting for his survival in the midst of a painful awareness that history had other plans.

But after years of anger and tension in the Bay Area, the Weinstein Company, which purchased Fruitvale Station for $2.5 million at Sundance earlier this year, is using it as an opportunity.

As stated in big bold letters at the top of the post-screening business cards, they’re inviting everyone to “Commit to end social injustice in the name of Oscar Grant.” (A fitting sentiment, although the enticement of winning a gift card is jarring in this context.) The film’s website encourages visitors to share stories of overcoming prejudice, bullying, social injustice or mistreatment with their “I AM __” campaign. And of course they’re taking to social networking, such as this recent Instagram photo. Wish them luck. They’ll need it.