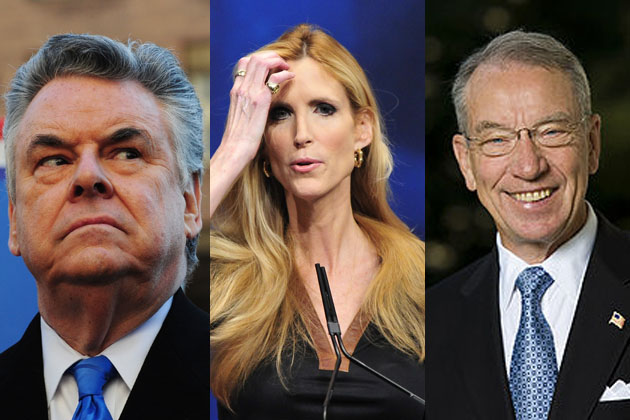 As of Friday evening, the manhunt for Boston Marathon bombing suspect Dzhokhar Tsarnaev was still ongoing. For legislators and pundits, however, it was already time to talk politics.

Seizing on the reported Chechen heritage and Muslim background of the alleged bombers, politicos used the attack in Boston to make points about everything from immigration reform to the use of drones on American soil. Although it’s totally appropriate to talk politics in the aftermath of a tragedy, talking politics doesn’t necessarily mean you’re making a good argument. Here are some of the worst reactions to the Boston bombing.

Given the events of this week, it’s important for us to understand the gaps and loopholes in our immigration system. While we don’t yet know the immigration status of the people who have terrorized the communities in Massachusetts, when we find out, it will help shed light on the weaknesses of our system.

Immigrants are terrorists. “It’s too bad Suspect #1 won’t be able to be legalized by Marco Rubio, now,” conservative pundit Ann Coulter tweeted Friday. She’s implying that unauthorized immigrants in the United States might be terrorists.

Time for spying on all Muslims. Former Homeland Security chairman Rep. Peter King (R-N.Y.) didn’t waste any time demanding that the Muslim community come under scrutiny, even though the motivations behind the bombing are not yet fully known.

“Police have to be in the community, they have to build up as many sources as they can, and they have to realize that the threat is coming from the Muslim community and increase surveillance there,” King told National Review, adding that “we can’t be bound by political correctness.” He also insisted he wasn’t just singling out Muslims (ellipses added by National Review): “We need more police and more surveillance in the communities where the threat is coming from, whether it’s the Irish community with the Westies [an Irish-American gang in New York City], or the Italian community with the mafia, or the Muslim community with the Islamic terrorists.” Racial profiling for everyone!

Let’s ignore the Constitution. Sen. Lindsey Graham (R-S.C.), who is up for reelection in 2014, insisted that President Barack Obama ignore the Constitution and refuse to recognize Tsarnaev’s Miranda rights if he is captured. Graham tweeted that Obama should hold Tsarnaev as an “enemy combatant.” Tsarnaev is an American citizen and no direct links between the Tsarnaev brothers and an international terror group such as Al Qaeda have been established. But that didn’t stop Graham, a senator sworn to uphold the US Constitution, from insisting the government behave as though an American citizen’s constitutional rights don’t exist.

“[America] a battlefield because the terrorists think it is,” Graham said during an interview with Washington Post conservative blogger Jennifer Rubin later on Friday. “It sure would be nice to have a drone up there [to track the suspect.]”

Rubin added the brackets in Graham’s last sentence. Without the full context, it’s impossible to know whether Graham wanted the drone in the air for surveillance purposes as opposed to launching missiles or dropping bombs.

The Boston Marathon bombing is an inside job. Noted conspiracy theorist Alex Jones is insisting that the Boston bombing was a “false flag” operation carried out by the government. It seems unlikely that Jones’ bizarre understanding of the attack will catch on. But prominent politicians, including Sen. Rand Paul (R-Ky.), former Reps. Ron Paul (R-Texas) and Dennis Kucinich (D-Ohio), and current Reps. Louie Gohmert (R-Texas) and Alan Grayson (D-Fla.), have appeared on Jones’ radio show. Perhaps these latest comments will finally convince lawmakers that it’s time to stop legitimizing Jones’ conspiracy-mongering.