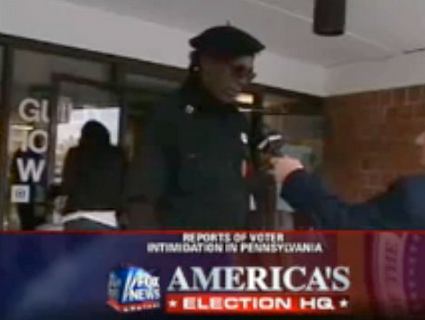 Long before Washington Post conservative blogger Jennifer Rubin fabricated the existence of a real-time video feed of the attack on the US consulate in Benghazi, deliberately misled her readers in her coverage of Mitt Romney during the 2012 election, and compared Jewish Democrats supporting Chuck Hagel to Jewish leaders who failed to prevent the Holocaust, she wrote that the Obama White House had conspired to shield the New Black Panther Party, a buffoonish black separatist group, from being brought up on voter intimidation charges during the 2008 election.

Titled “Friends in High Places,” Rubin’s June 2010 expose in the Weekly Standard alleged that the “Obama Justice Department went to bat for the New Black Panther party—and then covered it up.” Rubin’s reporting on the New Black Panther voter intimidation case has now been eviscerated by not one but two internal investigations of the Justice Department’s civil rights division, though Rubin has gone out of her way to avoid recognizing this.

Rubin’s claim rested on the fact that, shortly after Obama took office, interim leaders of the civil rights division dropped some of the charges in a voter intimidation case against the New Black Panther Party. The idea that the first black president of the United States and his black attorney general were going out of their way to protect an anti-white black fringe group fulfilled two right-wing fantasies—Obama as closet radical and his administration as an elaborate scheme of racial revenge against whites. The head of the civil rights division under Bush had broken civil service laws by seeking to purge liberals from the division and then lying to Congress about it, and, to conservatives like Rubin, the New Black Panther case was proof that the Obama Justice Department was no less politicized.

The problem, however, is that right-wing narrative is bogus. In 2011, the Justice Department’s Office of Professional Responsibility (OPR) found “no evidence that the decision to dismiss the case against three of the four defendants was predicated on political considerations.” The interim heads of the civil rights division had dropped some of the charges against the NBPP not because they’d been pushed to by the AG or the White House, but rather because they had discovered the conservative-leaning attorneys who filed the case had left out key—and possibly exculpatory—information. The OPR report also found, contrary to Rubin’s reporting and to right-wing allegations, that political higher-ups at the Justice Department had sought to prevent the New Black Panther Party case from being dismissed outright.

A second report on the topic, from the Justice Department Inspector General’s office, was released Tuesday. Like the OPR report before it, the IG report found that the decision to narrow the case was “based on a good faith assessment of the law and facts of the case.” Perhaps more importantly, the IG report found no evidence that the division “improperly favored or disfavored any particular group of voters.”

Rubin has not acknowledged that her writing on the New Black Panther Party has been discredited by the two reports. Instead, she has taken Tuesday’s IG report as a vindication, declaring that “things were much worse than most imagined”:

The IG declined to find a racial or political motive for dismissing the New Black Panther case, but found actions surrounding that action “risked undermining confidence in the non-ideological enforcement of the voting rights laws.” In other words, it sure looked partisan.

The appearance of partisanship, in Rubin’s telling, is “much worse” than the Obama administration being racist. Rubin hasn’t moved the goalposts, she’s flung them into another dimension. Yet Rubin’s elaborate pratfall is not yet complete: When the original OPR report, which came to the same  conclusion as the IG report regarding the New Black Panther case, was released in March 2011, Rubin called it “unprofessional” and “biased.” Holding two wildly divergent opinions on the same set of facts is something of a Rubin speciality.

That’s not all. Although Rubin suggests the IG report scolded the Obama administration for “undermining confidence in the non-ideological enforcement of voting rights laws” by “dismissing the New Black Panther Case,” the report actually scolded both administrations. Here’s the paragraph from the report Rubin cites:

In the highly controversial NBPP matter, we found that the decisions that were reached by both administrations were ultimately supportable on nonracial and non-partisan grounds. However, we also found that the manner in which the outgoing administration filed the case without following usual practice and the new administration’s dismissal of Jackson as a defendant at the eleventh hour, particularly viewing the latter in the context of the contemporaneous discussions about removing [Christopher] Coates as Section Chief, both risked undermining confidence in the non-ideological enforcement of the voting rights laws.

The IG report didn’t say these decisions were partisan. It says they risked “undermining confidence” in the section, which Rubin would have you believe she thinks is “worse” than the original right-wing charge that the Obama administration was racist.

After mischaracterizing the IG’s assessment, Rubin quotes this entire paragraph from the report, seemingly unaware that it refers to the conduct of the attorneys who filed the case as well as those who decided to drop some charges. She then asks “under such circumstances, how can [Thomas] Perez remain as division chief?” It’s a strange question, not only because the paragraph criticizes both administrations, but because Perez wasn’t in charge of the division during most of the conduct in question, under Bush or Obama.

Rubin then writes that the report “confirms” her criticism of Perez for his “misleading testimony” before the civil rights commission. Rubin omits that she called the testimony “misleading” only because Perez did not acknowledge her theory that the political leadership of the Justice Department tried to kill the New Black Panther case. But according to the IG report, Justice Department political leadership actually prohibited the division “from dismissing the case in its entirety.” This doesn’t “confirm” her original criticism, it disproves it.

Similarly, Rubin writes that the report confirms her claims of “harassment of conservatives in the division.” The report does refer to conservatives being poorly treated by liberal colleagues within the division (and vice-versa). The only problem is that nearly all the incidents described occurred during the Bush administration (which Rubin also omits) in a period in which the leadership of the division was referring to liberals as “commies” and trashing black attorneys for speaking in “ebonics,” while handing out key assignments to “right-thinking Americans.” The IG does criticize politicization “across two administrations,” but there is nothing in the report that happened during the Obama administration comparable to the Bush-era leadership blatantly breaking the law or even to the harassment of conservatives Rubin cites.

The game Rubin is playing here is to manufacture a “scandal” that might derail the potential nomination of civil rights division head Thomas Perez to be labor secretary before it is even official—much as the bizarre fixation on CIA talking points on the Benghazi terrorist attack provided to Susan Rice helped kill her chances of becoming secretary of state. Rubin is following the lead of Republicans in Congress, who hope to derail Perez over actions that for the most part occurred before he had joined the Justice Department—and when a Republican president was in charge.

Rubin has a track record of ignoring her most egregious errors. Even so, claiming that her years-long campaign to cast the Obama administration as an ally of black separatists has been vindicated by a report that concludes just the opposite requires a remarkable suspension of disbelief. But as the months-long happy face Rubin put on during the Romney campaign showed, she’s nothing if not a good soldier.