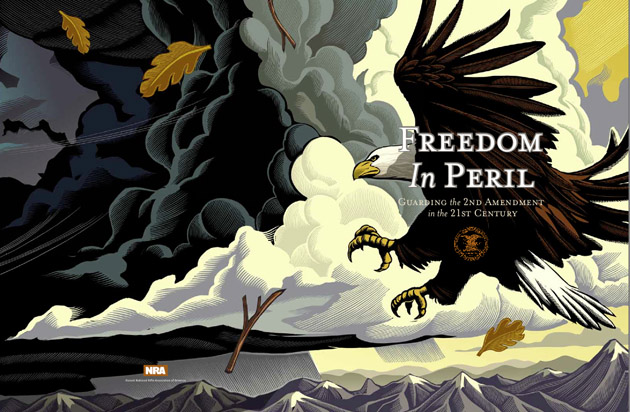 “Second Amendment freedom today stands naked in the path of a marching axis of adversaries far darker and more dangerous than gun owners have ever known.” So opens “Freedom in Peril,” a slick 2006 brochure by the National Rifle Association that serves up the group’s agenda with a heavy dose of omnious hyperbole. The UN and George Soros are coming for your guns! PETA will ban hunting! Suburban dads must defend their families from torch-carrying marauders!

The document’s text and its illustrations are so over-the-top that when they were first leaked by Wonkette, there was speculation that they were a hoax. But the NRA confirmed they were real, though it maintained they were from a stolen draft of a publication that has still yet to be publicly released.

In their introductory note, NRA president Waye LaPierre and chief NRA lobbyist Chris Cox warn of “the coming confrontation” between the “pro-freedom voting bloc” and “the gun-ban crowd.” Though they focused on the threat of anti-gun legislation carried out under the guise of fighting terrorism, LaPierre and Cox also anticipated the calls for action that might follow an event such as the Newtown massacre:

It’s inevitable that terrorists will infest America for generations to come. It’s also inevitable that an anti-gun president will occupy the White House, and anti-gun forces will control the U.S. House and Senate. This is when the alchemy explodes, never to be contained again. When these two certainties intersect, America’s anti-gun agenda will emerge in full force masquerading as an anti-terrorist agenda. Unless we are well-financed to face that moment, the final disarmament of law-abiding Americans will occur beneath the shroud of anti-terrorism legislation. […]

History teaches us that their assault will be precipitated by a high-profile criminal act, like an L.A. riot, a D.C. sniper or a schoolyard shooting. All it takes is a rare, tragic anomaly to roll out a blood-red carpet for the gun-ban crowd.

The brochure criticizes the “tragedy chasers” and “vultures” who sensationalize and politicize gun violence, including school shootings. The NRA has a history of not commenting on prominent shootings (including, so far, Newtown), though “Freedom in Peril” suggests that it will not stand on the sidelines much longer:

Until now, NRA has rightfully declined to join the debate, because no effective solution includes infringement of the Second Amendment. Although tragic, these incidents have called for no more anti-gun measures than any other crime committed with firearms.

As its guardian, NRA must accept the financial responsibility to take its place at that table of debate, and prevail. […]

Too often, the media have given enormous attention to school murderers as a tactic to promote the gun-control agenda. Too often, such attention has likely led other sociopaths and losers to conclude that their one chance to become famous is to attack a school. 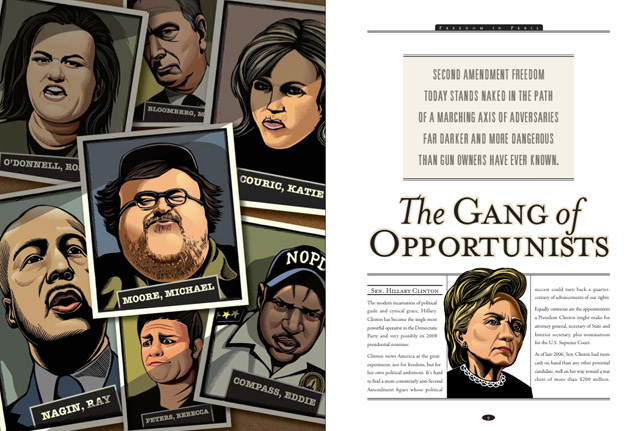 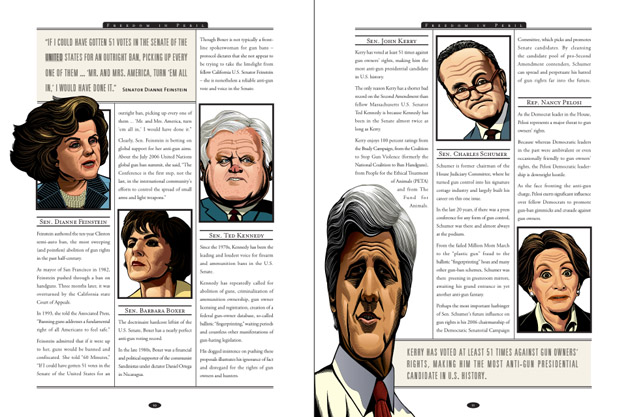 And it’s not just the liberals and one-world-government types you should be afraid of. “Freedom in Peril” also reminds NRA members who the real scary gun owners are: “[T]o criminal aliens, America is a giant supermarket, and nobody’s minding the store.” 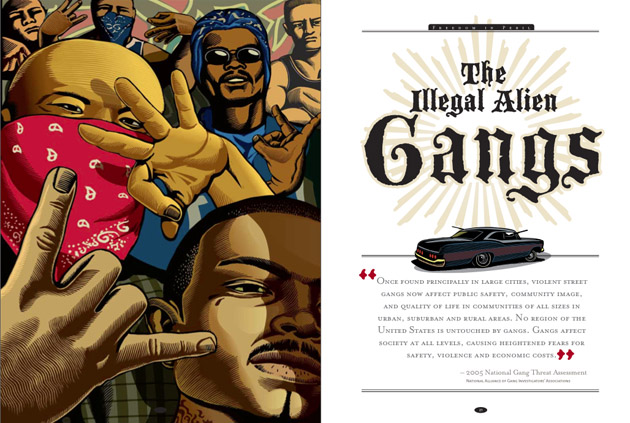 BoingBoing still has the full document; download it here.