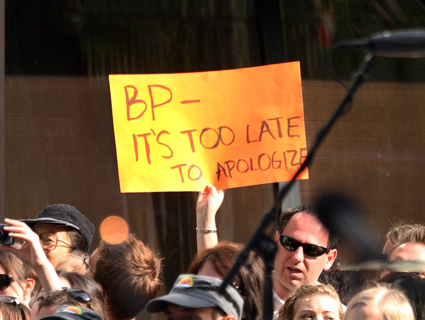 The Environmental Protection Agency announced on Wednesday that it has temporarily barred BP and all its affiliates from new government contracts. This is significant news, as it comes at the heels of BP’s settlement with the Department of Justice over criminal charges related to the Deepwater Horizon oil disaster. One of the criticisms of the settlement was that it did not include penalties for the company beyond the $4.5 billion fine.

The EPA’s announcement was a bit of a surprise. The agency said in a press release that the prohibition on new contracts is in response to BP’s “lack of business integrity as demonstrated by the company’s conduct with regard to the Deepwater Horizon blowout, explosion, oil spill, and response.” That included neglect and misconduct that led to the death of 11 rig workers, and lying to Congress and shareholders about the extent of the damage from the spill.

The company will be barred from obtaining new contracts “until the company can provide sufficient evidence to EPA demonstrating that it meets Federal business standards.” The company will, however, maintain its current contracts with the government. The Wall Street Journal reported during the 2010 spill that BP was “the single biggest supplier of fuel to the Department of Defense, with Pentagon contracts worth $2.2 billion a year.”

Scott Amey, general counsel for the Project On Government Oversight, called the announcement “surprising but welcome” in a statement. “This is exactly the strong step the government should take to protect federal agencies, safeguard taxpayers, and establish expectations for responsible contractor behavior,” said Amey. “BP had years to improve its business ethics and is paying the price for its inaction.”