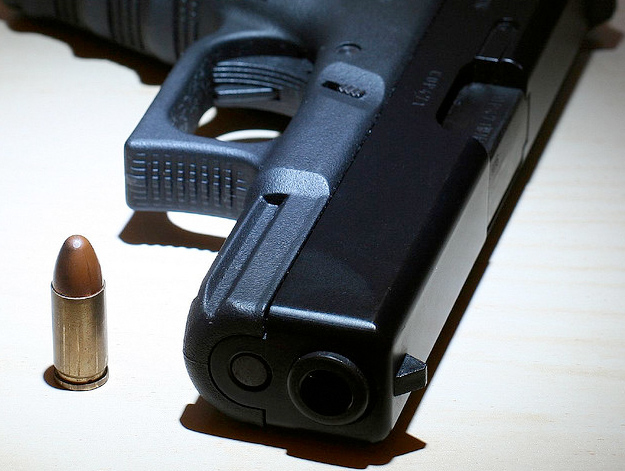 Battling the Glock: Doctors could run afoul of Florida's government if they ask patients about firearms.<a href="http://www.flickr.com/photos/smarterlam/163692235/sizes/z/in/photostream/">Smarter's Photos</a>/Flickr

Less than a month before Florida hosts the Republican National Convention, the state’s right-wing governor is pushing for an unusual law that privileges the Second Amendment over the First Amendment. Gov. Rick Scott announced Monday that his administration will pursue a court appeal to defend the state’s controversial “Docs vs. Glocks” law, which makes it a crime for doctors to ask patients if they own guns.

The 2011 “Firearm Owners’ Privacy Act”—one of a series of NRA-backed, aggressive pro-gun laws passed by Florida’s conservative Legislature in recent years—aims at keeping physicians from gathering information on patients’ weapons while discussing their health risk factors. (Decades of studies have shown that even law-abiding, responsible gun owners and their families have higher risks of death by gunshot when they keep a firearm in the home.)

“Patients don’t like being interrogated about whether or not they own guns when they take their child with a sore throat to a pediatrician, nor do they like being interrogated in an emergency room when their Little Leaguer broke his leg sliding into first base,” the NRA’s gun for hire in Florida, longtime firearms lobbyist Marion Hammer, told the Tampa Tribune last fall.*

Doctors have long been permitted to ask patients about other risk factors, like smoking and drinking (and patients, of course, have long had the freedom to lie about their bad habits). But asking about guns is different, say backers of the law, which could cost offending doctors their medical licenses and a $10,000 fine. Some even argue that federal power makes the law especially important. “Now we’ve got Obamacare, the government owns our health care,” a 58-year-old Floridian told Sunshine State News. “They can coerce the names and habits of gun owners out of doctors’ medical records, that’s what scares me most. Maybe it won’t happen today or tomorrow, but the ability to do it is there.”

Apparently, you sometimes have to destroy the Constitution in order to save it. A federal judge tossed the “Docs vs. Glocks” law out of her district court last September, ruling that it trampled doctors’ right to free speech. The law, Judge Marcia Cooke wrote, “aims to restrict a practitioner’s ability to provide truthful, non-misleading information to a patient”—information that she said “simply does not interfere with the right to keep and bear arms.”

The governor disagrees. “This law was carefully crafted to respect the First Amendment while ensuring a patient’s constitutional right to own or possess a firearm without discrimination,” Scott said in his statement. “I signed this legislation into law because I believe it is constitutional and I will continue to defend it.”

How far is Scott willing to go to protect the law? Far enough to spend a big chunk of public money on legal challenges. A report in the South Florida Sun-Sentinel shows that the same tea party governor who trumpets fiscal conservatism has spent north of $880,000 in taxpayer money so far to wage mostly unsuccessful court battles for the conservative agenda—including Docs vs. Glocks, voter suppression measures, drug tests for welfare recipients, prison privatization plans, and the Supreme Court challenge to Obamacare.

That approach defies sense, Dr. Bernd Wollschlaeger, a Miami doctor fighting the Docs vs. Glocks law, told McClatchy last month. “My fear is the state will appeal and keeping wasting money to fight windmills,” he said. “This is an ideologically driven, politically motivated vendetta by the NRA that has to stop.”

* The name of this news publication was originally reported as the Tampa Bay Times. The error has been corrected.