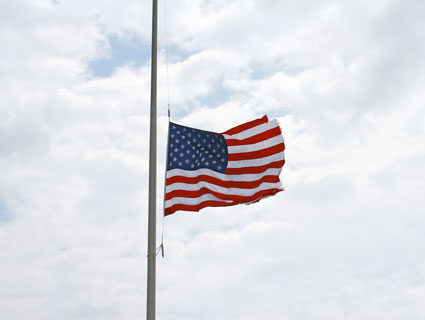 Early Friday morning, as Americans were waking up to the horrifying news of a mass shooting at a midnight showing of the latest Batman film in Aurora Colorado, someone was writing a press release. A political pundit was outlining the early draft of an op-ed explaining how there is no more vivid example of what ails America than those lost in Aurora. Politicians and their speechwriters began crafting careful statements, seeking to find the exact right measure of solemn regret and hardened resolve.

Is this disturbing? It’s said that one should never try to “politicize” tragedies like this one. President Barack Obama said Friday morning that “there are going to be other days for politics, this I think is a day for prayer and reflection.” Mitt Romney, his Republican rival, said “I stand before you today not as a man running for office, but as a father and grandfather, a husband, and American.” Both the campaigns and some of their respective third-party allies have asked networks to pull negative advertisements from television in the state. No one wants to make a scene at a funeral.

There’s something quite political about that, though. After all, the reason the campaigns are behaving this way is not just because of decorum, but because a breach of decorum would exact a political cost. Politics are an inevitable part of a collective national trauma, which, for better or for worse, is how America treats incidents like this one.  It’s not only appropriate to ask how we got here—it would be irresponsible not to. We frequently treat politics as a team sport, but it isn’t one. Trying to avoid politics trivializes politics, which is the means by which we make collective decisions as a society. A discussion about policies that could prevent future tragedies like this couldn’t be more appropriate.

Politics itself is not the problem, but there are reasons we react with revulsion to the thought of “politicizing” tragedies. What repells us is the rush to collective blame, the lightning impulse to assign responsibility to one’s political adversaries. There is nothing like an actual monstrous act to demonstrate the silliness of our tendency to reduce one another to caricature. Shortly after the shooting, the website of the late Andrew Breitbart published speculation, quickly hyped by conservative internet maven Matt Drudge, that the suspect in the the shooting was a registered Democrat. With no apparent sense of irony, the website later published an “exclusive” press release from a Tea Party group criticizing ABC News’ Brian Ross, who made the outrageous decision to speculate publicly that the suspect might have been involved with a local Tea Party organization. I don’t know Ross’ political views, so I can only describe his actions as inexcusably reckless. (ABC later apologized.)

To look at the the frightened eyes of the survivors in Aurora, and see only our own intrinsic goodness, and our political enemies’ implacable evil, is the most impenetrable vanity. It’s not politics, it’s just tribalism. And it’s grotesque. But we shouldn’t mistake this kind of pettiness for politics itself, which is far too important an arena to cede to those who are incapable of seeing a tragedy and wondering, above all, what it says about themselves. We should be talking about why this happened, and what, if anything, can be done to prevent it from happening again.

National tragedies are political. They’re too important not to be.