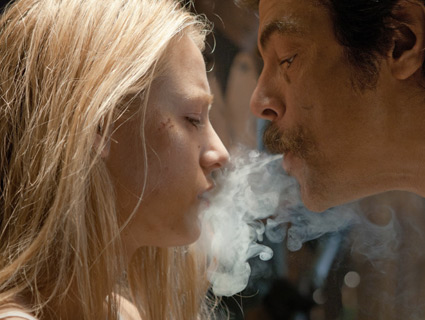 Let’s be real for a minute: Oliver Stone has been going through a rough dry-spell that began in the late ’90s. Since his foray into neo-noir with 1997’s U-Turn, his work has reflected a severe shortfall of mojo. Any Given Sunday was a letdown. World Trade Center was a passionless ode. W., though unfairly maligned, couldn’t hold a glim to Stone’s past political offerings. Wall Street: Money Never Sleeps was a solid “meh.” And Alexander—along with its two director’s cuts—was maybe one of the worst things to happen to anyone, anywhere, ever. And when he wasn’t helming regrettable dramas, Stone could be found crafting facepalm-worthy love letters to Hugo Chavez, and working on a 10-hour, $5 million documentary for Showtime. (The documentary, titled The Untold History of the United States, will take an empathetic look at Mao, Stalin, and Hitler—and it all sounds so gruelingly Oliver Stone-y.)

But with Savages, Stone snaps out of his slump, long enough to make one intoxicating, gory, gut-punch of a movie.

The film, an adaptation of Don Winslow’s best-selling novel of the same name, takes place in the medicinal-marijuana haven of Southern California, against a backdrop of seductive indolence. The plot is your average love story: Boy meets girl. Boy’s best friend, too, meets girl. Boys and girl enter into a luscious three-way relationship, while boys operate a popular cannabis outlet under the protection of a crooked DEA agent. Powerful Mexican drug lords get angry with boys, kidnap girl, abscond with girl across the border. Boys go after cartel with assault rifles blazing, aiming to rescue girl so that they may return to the normalcy of their loving, polyandrous freakshow. Sadistic bloodletting ensues.

The boys are: Ben (played by Aaron Taylor-Johnson, who was Kick-Ass in Kick-Ass, and John Lennon in Nowhere Boy) and Chon (Taylor Kitsch, who was total balls-to-the-wall boss in Battleship, and some other stuff). Chon is an ex-Navy SEAL and Afghan War vet who takes a violence-solves-all-life’s-problems approach to the kef business. Ben is the Buddhist/entrepreneur/botany expert who sports a ridiculous ponytail. The two of them are like Felix and Oscar, if Felix and Oscar had been nailing Blake Lively and shooting Mexicans.

This tokers-versus-cartel thriller is a ferocious, lurid good time. But to fully enjoy Savages, you have to clear one hurdle: The first few minutes of voice-over narration. As the film kicks off, Lively (who plays the abducted Ophelia) awkwardly walks the audience through the cast of characters’ various motivations and backstory. Lively’s extended monologue is performed with all the gravity and sex appeal of an episode of Popular, and is overloaded with faux-edgy one-liners. “Drugs are a rational response to insanity,” Ophelia drawls like a spell of narcolepsy. “I have orgasms, he has wargasms…[Chon] tries to fuck the war out of him,” she triumphantly purrs, as if “wargasm” was the single most clever, most brilliant, most epic thing anybody had ever written down. “Every successful business has an origin.” (As opposed to ones that don’t?)

The tone it sets is flat-out embarassing. Fortunately, the rest of the movie doesn’t follow this lead.

For the remaining two hours, Savages has Oliver Stone back in wild-man form, flexing the same muscle and orchestrating the same kind of controlled chaos previously displayed in Salvador, JFK, Natural Born Killers, and the Stone-penned Midnight Express, Scarface, and Year of the Dragon. The carnage—necklacing, brains blown out, eyeball dangling out, the most hardcore kneecapping in modern movie history—is a doozy. It’s solid summer entertainment to watch botanical beach-hippie Ben ditch the Noble Eightfold Path to help Chon turn Southern California into a special-ops war zone. (The climactic, tightly choreographed close quarters shoot-out in the desert reaches a level of riveting intensity that matches the classic chase sequence in Abel Ferrara’s King of New York.)

The film is well-paced, charged with an electrifying energy, and features a fabulous ensemble cast. Taylor-Johnson, Kitsch, and Lively are fine, but its the supporting cast that really brings the A-game. John Travolta, as the slick, double-dealing federal agent Dennis, delivers his best performance since he put on a dress and fatsuit for Hairspray (2007)—and also provides the jet-black comic relief. Benicio del Toro, as Baja Cartel enforcer Lado, knocks it out of the park as evil incarnate. And Salma Hayek, as the stylish and ruthless cartel chief Elena Sanchez, is an absolute tour de force, dripping with effortless menace. Hayek, pulling off some major artificial bangs, strikes just the right balance between sass and bloodlust; at the drop of a pin, she can make a smooth shift from playfully mocking the way 20-something Ameicans talk, to threatening to murder her staff’s children and “whore mothers.”

But perhaps the best thing about the movie is that Oliver Stone manages to keep a lid on his trademark excesses. There’s no political preachiness, no rabid conspiracy theorizing, and no bloated technical or narrative overindulgence. It’s a just a lean, mean, respectably sleazy little movie, in which Stone and co. have a blast with the material. Savages scores its highest marks as a scorchingly fun tableau of the sun-soaked underbelly: It’s all sex, drugs, tequila, guts, loud guns, car explosions, dirty tricks, and dark humor. In other words, all the things that make movies worth making.

Savages gets a wide release on Friday, July 6. The film is rated R for grisly violence, some graphic sexuality, nudity, drug use and language throughout. Click here for local showtimes and tickets.