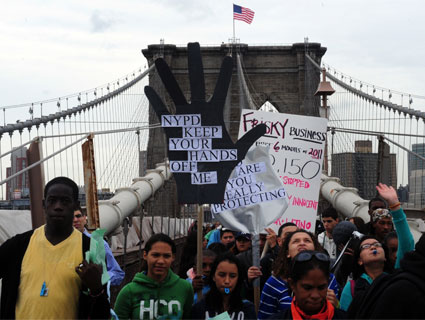 Want to end stop-and-frisk tactics by police? There’s an app for that.

But now, pushback against stop-and-frisk is in the hands of everyday citizens. On Wednesday, the NYCLU, in collaboration with Brooklyn developer Jason Van Anden, rolled out a free Android app (iPhone version out later this summer) called “Stop and Frisk Watch,” which will allow New Yorkers to monitor and report police misconduct. The app alerts users when folks in their area are being stopped by the cops and lets them film the incident and send it to the NYCLU. 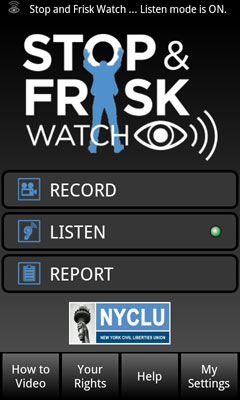 Van Anden caught the eye of the NYCLU when he devised an Occupy-inspired app called “I’m Getting Arrested” that allows people to broadcast to their friends that they’re being detained. When the NYCLU approached him about creating the stop-and-frisk app, “I was totally on board because I had seen incidents in my neighborhood,” Van Anden says. Local community and labor groups also pitched in with brainstorming and test-runs.

While an app for a pricey smartphone might seem like the wrong tack for poor kids in rough neighborhoods, research indicates that Stop and Frisk Watch should in fact be accessible to many. About half of cellphone users in the US have smartphones, and a 2011 Pew study found that blacks and Hispanics are more likely than whites to use their phones for “non-voice” uses like recording videos and downloading apps.

“The idea behind the app is to give every New Yorker a tool he or she can have in their pocket to document what the police are doing, to shine a light on misconduct,” said Jennifer Carnig, the NYCLU’s communicaton director.

The NYPD stopped and questioned people 685,724 times last year, up 600 percent from 2002, according to the NYCLU. Eighty-seven percent were black or brown, and nine of ten were not arrested or ticketed.

“We know these awful numbers and hear these terrible stories,” Carnig said, but the NYCLU wants to “put a face” on the practice. “A lot of people have this miconception that a street stop is really polite. We want to show what it really looks like and shift the conversation.” They plan to use the footage collected by the app for public education, press work, lobbying—and maybe even litigation.

The police, unsurprisingly, take issue with the app. Cheryl Crispin, a public information officer at the NYPD, says the app might be useful for criminals since it publicizes police location. “Privacy issues are legion,” she adds. “It may be troubling to some that the NYCLU is collecting personal identifying information.” The app’s settings allow, but do not require, the user to input their name, phone number, and email address.

Stop and Frisk Watch’s predecessor was pretty successful, according to Van Anden. He says that I’m Getting Arrested has been dowloaded close to 30,000 times and is used around the world. If Stop and Frisk Watch takes off, a new approach to grass-roots pushback could help quash the increasingly notorious practice.