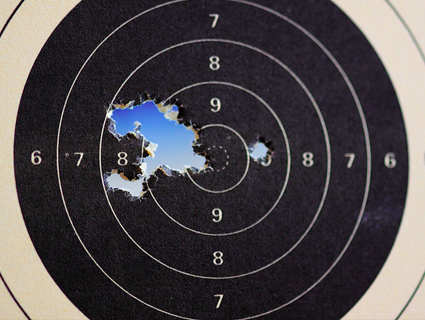 After avoiding major national scrutiny for more than six years, “Stand Your Ground” laws are increasingly coming under fire for making America a more dangerous place. Late last month, two economists from Texas A&M University—that hotbed of socialist leftism!—published a report (PDF) concluding that the broad “self-defense” statutes didn’t actually deter crime, as proponents suggest. Rather, murder and manslaughter with firearms rose as much as 9 percent in SYG states—as many as 700 more deaths per year nationwide.

The Texas A&M report, which looked at crime stats from 2000-2009, is perhaps the clearest evidence yet that the NRA’s crowning legislative triumph has been a public-policy nightmare. On the heels of the Trayvon Martin killing—in which shooter George Zimmerman initially claimed immunity from prosecution under Florida’s landmark SYG law—we here at MoJo crunched the numbers and found similarly disturbing trends. So did the Wall Street Journal. Just last weekend, the US Commission on Civil Rights announced it was investigating SYG, claiming there are “some indicators of racial bias” in the law’s enforcement nationwide.

That scrutiny doesn’t seem to extend here to Florida, the state that started it all in 2005 with its law. The state’s SYG task force did meet for the first time Tuesday in the tiny burg of Longwood. But the panel—set up by state Republicans—has already been criticized for its slow movement, and if Tuesday’s meeting was any indication, it’s unlikely to find much fault with the law. Republican Lt. Gov. Jennifer Carroll, the task force chairwoman, spent much of her time defending the origins of the law, which she helped pass as a legislator in 2005. “We were going through a period of carjackings and home invasions. People didn’t feel they had the right to protect themselves,” she said. “We wanted to give citizens the right to protect themselves.”

As we’ve reported, though, that’s hardly how it came about. The law in fact originated with a coordinated approach by the NRA and its proxies in Florida’s Legislature. And their direct ties to the American Legislative Exchange Council then helped them to export the law nationwide as “model legislation.” Homicides in Florida have since tripled, and doubled in other SYG states. Stand Your Ground is less about law-abiding self-defense than it is about the NRA’s far-right political agenda, as I explained yesterday on MSNBC, along with the Center for Media and Democracy’s Lisa Graves:

One thing I didn’t get around to mentioning: There are estimated to be 300 million guns in the US. The NRA claims to have 4 million members. Which means there are a whole lot of American gun owners who aren’t in the NRA—and who aren’t being represented by the organization’s political agenda.