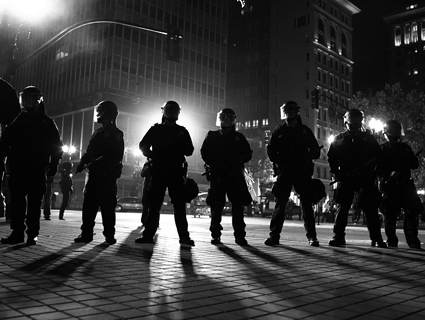 Riot police prepare to raid the Occupy Oakland encampment in the early morning of October 25.<a href="http://occupyoakland.tumblr.com/post/11957973007/photographs-police-raid-on-occupy-oakland">Rafael Roy</a>

The Oakland Police Department’s aggressive response to an Occupy Oakland protest that made international news last October was “flawed,” according to a newly released 120-page report (PDF). Commissioned by the city in December and conducted by the Frazier Group consulting firm for $100,000, the report criticized the department for its “outdated, dangerous, and ineffective” crowd-control tactics, which critically injured one protester.

The report comes on the heels of news that an OPD officer may have botched the investigation into the police-inflicted injury that left Marine vet Scott Olsen in critical condition during the October 25 protest. (A criminal investigation initiated by the OPD had been closed entirely until the Frazier Group expressed “serious concerns regarding [its] quality and breadth” and got it reopened, the new report revealed.) The allegation was made in a document filed with Thelton Henderson, the federal judge tasked with overseeing OPD independent monitors following a 2003 drug-planting scandal’s settlement. In January, Henderson wrote that the police response to Occupy Oakland protests raised “serious concerns” and that the department remained “woefully behind its peers around the state and nation.” If the department doesn’t make significant improvements, it runs the risk of being placed in federal receivership.

The Frazier report criticized the OPD for inadequately planning the early morning raid of the Occupy Oakland camp that sparked the October protests.  It also blamed the aggressive police response on “a series of cascading events,” including recent command turnover that resulted in failures to learn from mistakes, and “years of diminishing resources” that have reduced the number of officers in the department by 23 percent since 2009.

The report also singled out “other direct action groups” among the Occupiers, including “Black Bloc groups,” which “detest organization and wish to take away tools of empowerment through anarchy” and confront police “with the intent to provoke physical contact and seek notoriety.” Black bloc tactics have been the subject of criticism and controversy throughout the course of the Occupy movement.

More than 1,000 complaints have been filed over the OPD’s handing of various Occupy Oakland protests, according to the East Bay Express. The OPD has repeatedly violated its own crowd-control policy, which was adopted following an aggressive response to a 2003 antiwar protest that resulted in lawsuits that cost the department more than $2 million. OPD Chief Howard Jordan, who was a lieutenant at the time, was involved in policing that protest and was deposed during the ensuing investigation. In both cases, the heavy-handed tactics centered on the use of “less-lethal” projectiles, such as the beanbag round that later injured Scott Olsen. The Frazier report said such weapons should be replaced with “state of the art equipment that will reduce injuries” and “help prevent property damage.”

The OPD has revised its crowd control policy since Occupy Oakland began last fall. The changes were most evident during a May Day protest, when police executed targeted “snatch and grab” arrests and tried a more localized use of tear gas as part of a toned-down response. (However, mutual aid officers from Alameda County did roll in a $323,000 armored personnel carrier purchased in 2010 from the military contractor Academi.)

The Frazier report laid out 68 recommendations for Oakland police to improve their handling of future protests. In a press release, the city claimed (PDF) that nearly three-quarters of those recommendations “are currently completed or underway.” The consultants also credited Chief Howard Jordan, who was the interim police chief last October, for “making departmental improvements his highest strategic priority” since the fall. The new report “confirms that we have the right leadership in Chief Jordan,” beleaguered Oakland Mayor Jean Quan said in the city’s press release, “and we have now begun to implement new policies, procedures, and training to create a new Oakland Police Department.”