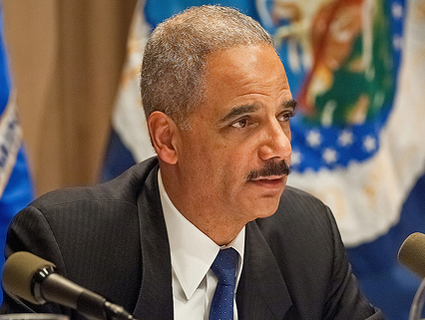 When it comes to targeted killing of American citizens, both major political parties have President Barack Obama and Attorney General Eric Holder’s back.

Top officials and legislators from both the Democratic and Republican party have expressed public support for the Obama administration’s drone strikes against American citizens who were suspected of terrorism abroad. It’s not just legislators either—a majority of Democrats and liberals approve of Obama’s targeted killing policy.

“The president of the United States has a responsibility, consistent with his legal authorities, to keep the country safe. And that’s what he did,” Bush-era Justice Department official Jack Goldsmith told NPR’s Tom Ashbrook Monday, while discussing the death of Anwar al-Awlaki, a suspected member of Al Qaeda and US citizen who was killed in a US government-directed drone strike. “Americans have been targeted and killed in past wars, in the Civil War, and in World War II as well, nothing like this kind of scrutiny has ever occurred before.”

John Bellinger, a top lawyer at the State Department during the Bush administration, wrote that Holder’s speech was “especially commendable for its detailed explanation of the U.S. laws applicable to targeting Americans who engage in terrorist activities outside the United States.” John Yoo, the former Justice Department attorney who outlined the legal justification for Bush-era torture, mostly complained that Holder hadn’t given his former boss enough credit.

Republicans aren’t the only one supporting the president’s policy on targeted killing. Appearing on CNN last Sunday, Senate Majority Leader Harry Reid said outright that he didn’t understand what Holder meant when he said that “due process” and “judicial process” were not the same, but that “I do know this: The American citizens who have been killed overseas who are terrorists, and, frankly, if anyone in the world deserved to be killed, those three did deserve to be killed.”

That includes not only accused American al Qaeda propagandists Samir Khan and Anwar al-Awlaki, but al-Awlaki’s 16-year-old son Abdulrahman. Even former Senator Russ Feingold, the lone vote against the PATRIOT Act in 2001, told the Huffington Post‘s Andrea Stone in February that he was “very pleased that [Anwar al-Awlaki] was taken out.” Legislators, to this day, do not appear to have read or been given access to the secret legal memo justifying targeted killing that Holder’s speech was based on.

Although Goldsmith, the Bush-era DOJ official, is correct that American citizens have been killed by the US government in past wars, neither the Civil War nor World War II are exactly comparable examples. Advances in technology mean the US can target terror suspects well in advance of an attack, and membership in a terrorist group is not as easily defined or discerned as being part of a uniformed military force. That’s why detainees at Gitmo have access to US courts to challenge the government’s authority to detain them.

“The idea that the executive branch can be judge jury and executioner…totally undoes the system of checks and balances,” Anthony Romero, the executive director of the ACLU, said while debating Goldsmith on NPR Monday. “The attorney general is telling us exactly what Mr. Gonzales and Mr. Ashcroft told us: Trust us, we’re doing the right thing.”