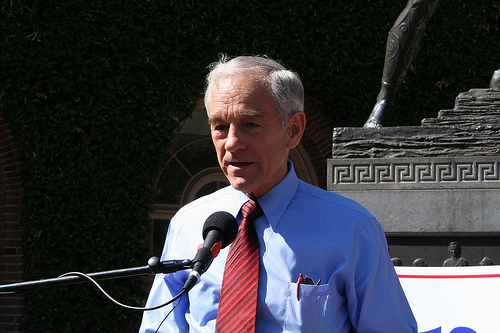 During Saturday’s ABC News debate, Rep. Ron Paul (R-Tex.) was questioned about the many newsletters published in the 1970s and 1980s under his name that contained racist, homophobic, anti-Semitic, and conspiratorial claims. One of those newsletters, published in December 1990, singled out civil rights champion Martin Luther King Jr. for a barrage of nasty rhetoric. That newsletter called King “a world-class adulterer” and went on to say the legendary civil rights leader “seduced underage girls and boys” and “replaced the evil of forced segregation with the evil of forced integration.”

Amazingly, Paul responded to the question about his racist newsletters by…praising King. Here’s what he said:

More importantly, you ought to ask me what my relationship is for racial relationships. And one of my heroes is Martin Luther King because he practiced the libertarian principle of peaceful resistance and peaceful civil disobedience, as did Rosa Parks did.

Paul’s newsletters contained plenty more incendiary, controversial rhetoric, including instructions for gunning down an “urban youth.” (“An ex-cop I know advises that if you have to use a gun on a youth, you should leave the scene immediately, disposing of the wiped off gun as soon as possible.”) They also said AIDS could be spread intentionally by “a malicious gay” and suggested renaming New York City “Welfaria,” “Zooville,” or “Rapetown.”

At the debate, Paul vehemently denied writing the newsletters. “Well, it’s been explained many times, and everything’s written 20 years ago, approximately, that I did not write,” Paul said. “So concentrating on something that was written 20 years ago that I didn’t write, you know, is diverting the attention from most of the important issues.” But this denial clashes with his own past remarks. In 1996, in an interview with the Dallas Morning News, Paul took ownership of the newsletters. Instead, he blamed critics for skewing the information that appeared in those newsletters. “It’s typical political demagoguery,” he said at the time.

What’s more, in other interviews in 1996 Paul failed to distance himself from the newsletters, defending them repeatedly. Here’s a rundown from ThinkProgress:

—In 1996, Ron Paul’s campaign defended his statements about the rationality of fearing black men. (“[W]e are constantly told that it is evil to be afraid of black men, it is hardly irrational.”) The Houston Chronicle reports, “A campaign spokesman for Paul said statements about the fear of black males mirror pronouncements by black leaders such as the Rev. Jesse Jackson.” [Houston Chronicle, 5/23/96]

—Paul said that his comments on blacks contained in the newsletters should be viewed in the context of “current events and statistical reports of the time.” [Houston Chronicle, 5/23/96]

Paul defended statements from an August 12, 1992 newsletter calling the late Rep. Barbara Jordan (D-TX) a “moron” and a “fraud.” Paul also said Jordon was “her race and sex protect her from criticism.” In response, Paul said “such opinions represented our clear philosophical difference.” [Roll Call, 7/29/96]

“Also in 1992, Paul wrote, ‘Opinion polls consistently show that only about 5 percent of blacks have sensible political opinions.’ Sullivan said Paul does not consider people who disagree with him to be sensible. And most blacks, [Paul spokesman Michael] Sullivan said, do not share Paul’s views.” [Austin American Statesman, 5/23/96]