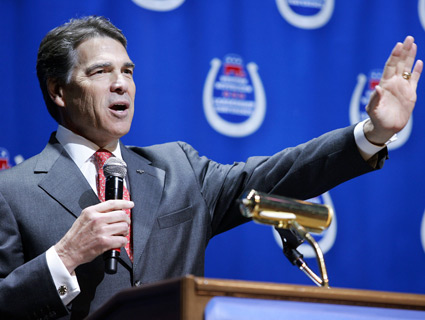 Update: On Monday afternoon, the Texas Court of Criminal Appeals stayed Skinner’s execution to review how changes in the state law on DNA testing requests affect cases like his.

“Any time DNA evidence can be used in its context and be relevant as to the guilt or innocence of a person on death row, we need to use it.”

This was the statement of none other than George W. Bush, Texas governor. He said it in June 2000, about granting a last-minute reprieve to death row inmate Ricky McGinn, who was seeking DNA testing of forensic evidence he claimed might exonerate him. (It didn’t, as it turned out, and McGinn was executed several months later.) Bush was running for president when he made his decision to delay the execution to allow for DNA testing.

Today, Texas governor and presidential candidate Rick Perry faces an almost identical decision with the case of Hank Skinner—the main difference being a greater likelihood that Skinner might actually be innocent of the crime for which he has been sentenced to death. Skinner, who is scheduled for execution on November 9, was convicted in 1995 of killing his girlfriend, Twila Busby, and her two adult sons. He insists he was passed out from intoxication at the time, and that the real perpetrator was probably Busby’s uncle (who has since died). At the time of his trial, Skinner’s lawyers chose not to have certain items tested, they said, because his DNA would likely be everywhere in the home he shared with the victim. But since 2000, Skinner has been arguing that there’s a chance DNA evidence could exonerate him.

The odds of getting that chance from the Perry administration look slim. On Skinner’s last scheduled execution date, in March 2010, it was the US Supreme Court, not Perry, who issued an 11th-hour stay. A year later, in a 6-3 decision, the court said that Skinner could file a federal civil rights claim requesting that his DNA be tested—but fell short of saying he had a constitutional right to the testing itself. According to the Texas Tribune: “The high court sent the case back to the federal district court to decide whether Skinner’s civil rights were being violated by the state’s application of [Texas’s] 2001 DNA law. State lawmakers, though, made significant changes to that DNA testing law this year, expanding access and eliminating many of the restrictions the state had previously cited in denying Skinner’s requests.”

Last month, the federal district court “indicated that in light of the changes to the law, it would likely leave the DNA decision to the state court.” Skinner’s lawyers filed a state court request for DNA testing under the new law, but it has been opposed by the Texas attorney general’s office as well as the local district attorney. On Thursday, a judge ruled against Skinner’s request. His lawyers will appeal—but time is running out.

Perry has the power to grant a monthlong stay, which might give the testing question time to play out. But as a recent NPR report explained, that’s about all he can do: “It’s often said the Texas governor ‘presides’ over an execution, but that’s inaccurate. He doesn’t sign a death warrant or set an execution date, as in some states. In Texas, the only absolute power the governor has is to grant a single 30-day stay of execution.” In fact, Scott Henson, who writes the respected Grits for Breakfast blog on Texas criminal justice, has a theory regarding Perry’s role, which NPR paraphrased thusly: “Perry has so little to do with executions that he strains to take credit for them, knowing how popular capital punishment is with voters.” That zeal has surfaced repeatedly in Perry’s presidential campaign and has been popular with Republican voters and debate audiences.

Based on political expediency, then, as well as past performance, it seems unlikely that Perry will use his power to grant a temporary reprieve for Skinner. In the latest poll, national support for the death penalty has declined to 60 percent. But among Republicans it’s 79 percent, with only 14 percent opposed.

There’s a chance, under the current scenario, that the DNA evidence could be tested and prove Skinner innocent after he has already been executed. Just last month, Texas prisoner Michael Morton was cleared of murdering his wife, based on DNA evidence that implicated someone else. Morton had served 25 years of a life sentence before he was freed; the average time a condemned prisoner in Texas spends on death row prior to execution is 10 years. “I thank God this wasn’t a capital case,” Morton said.

But even the possibility of executing a man proven to be innocent might not be politically threatening to Perry, or to the AG and DA blocking the testing. As the Sentencing Law and Policy blog pointed out, “[F]or many Americans, agreement with the assertion that innocent people have been put to death does not preclude simultaneous endorsement of the death penalty.”