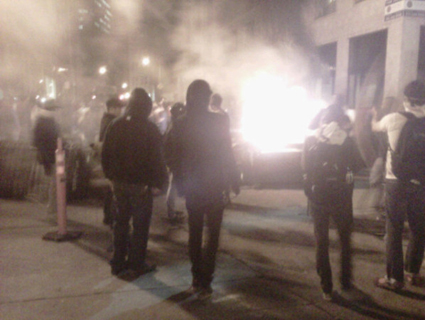 A barricade, lit on fire by black bloc anarchists in an attempt to counteract the effect of police tear gas, blocked off a route to a building temporarily occupied after Oakland's November 2 general strike.Gavin Aronsen

Under renewed threat of a crackdown against Occupy Oakland, a contentious general assembly meeting unfolded Wednesday evening in downtown Frank Ogawa Plaza. How should the movement deal with rogue elements in its midst? Occupiers tussled over proposals on endorsing nonviolence and denouncing “black bloc” tactics of vandalism and police agitation.

There seemed to be little consensus on the meaning of “diversity of tactics” and what qualifies as “violence.” But the questions raised represent a crucial debate for this prominent satellite of the Occupy Wall Street movement, which continued to draw attention after late-night rioting tainted a major general strike demonstration that shut down the nation’s fifth-largest port on November 2. There has been broad agreement among police and protesters alike that anarchists employing black bloc tactics—a concept that originated in Europe three decades ago in which protesters conceal their faces, dress in black, and often carry out targeted property destruction—were responsible for the rioting. But so far Occupy Oakland has failed to agree on what to do about the black bloc proponents in its midst.

When Wednesday’s general assembly of roughly 1,000 people came to an end around 10 p.m. most of the occupation’s youthful majority—some of whom had booed and shouted down suggestions to condemn property destruction and “peacefully” obstruct black bloc attempts at vandalism—turned in for the night or dashed off to UC Berkeley to support Occupy Cal against a clash with police that had begun while the Oakland assembly was still discussing its proposals.

In their absence, a group of about three dozen mostly middle-aged or older occupation sympathizers convened an informal strategy session on Frank Ogawa Plaza’s amphitheater stage. Gan Golan, a 37-year-old former Bay Area resident who still has an Oakland cell phone area code but no permanent residence, led much of the discussion. He’s been traveling between occupation sites across the country and heard about the general strike and subsequent rioting while in Manhattan’s Zuccotti Park. He said his phone had since been lighting up with text messages from New York occupiers curious for his take on Oakland’s events.

“People are very much in awe of what is happening in Oakland, so I felt the need to come witness it myself,” Golan said. “But that awe is very much about the nonviolent direct action at the port. There was a tremendous amount of disappointment about the use of ineffective vandalist tactics that did not seem in keeping with the ethos of this movement nationally. And that concern is very widespread through the occupations I’ve seen.”

Earlier that night, 599 Occupy Oakland voters rejected a proposal intended to distance the movement from black bloc tactics. Golan found the proposal’s language confusing and contradictory, calling for those employing black bloc tactics to be “responsible” in their actions and think twice about vandalizing property, but also supporting the movement’s right to ill-defined “all-inclusive tactics.” One skeptical general assembly speaker complained that the proposal was open-ended, and wondered whether it might force Occupy Oakland to green-light the “kidnapping and torturing of families of corporate executives.” The black bloc proposal, said Golan, “was completely unclear, and this movement needs to be emphatically clear.”

After the black bloc proposal failed, 63-year-old Allan Brill preemptively withdrew a separate nonviolence proposal that was unlikely to pass. Later, several speakers at the assembly questioned the short-lived occupation of the former Travelers Aid Society building, which led to a police crackdown with tear gas and “less lethal” projectiles in the wee hours of the morning following the port shutdown. One middle-aged man sympathized with a proposal to march to a different foreclosed building in the city and occupy it, but said, “I just think it’s a real tactical mistake to do it as Occupy Oakland.” (In the 1980s and early ‘90s, a campaign to occupy foreclosed buildings led to relatively peaceful confrontations with police.)

Ultimately, while many Oakland occupiers might empathize with the frustrations driving black bloc fans to bold statements and shows of force, the fear of alienating mainstream sympathy for the movement looms large. As Oakland union organizer Jeff Duritz put it: “It’s nearly impossible to change the country. The only way that that could possibly happen is if that’s a mass movement. If my mom can’t come, we’re not going to change the country. That’s the bottom line. We could spend days debating what ‘violence’ means, but when we boil it down, when someone smashes a window that means no one’s mom is coming, and we need the moms to come.”