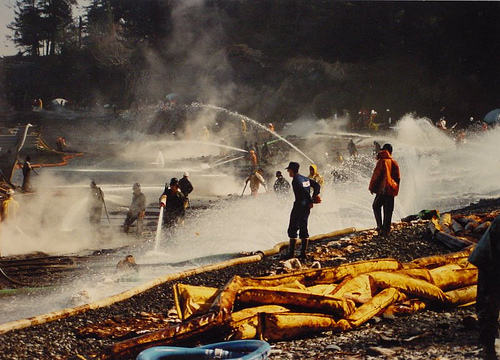 It’s been more than 22 years since the Exxon Valdez dumped 10 million gallons of crude into Alaska’s Prince William Sound, but you don’t have to look very hard to find lingering impacts from the spill. You can actually still find oil on the shore there, the fisheries are still struggling, and some bird species haven’t recovered. But now Exxon is saying it won’t pay up, despite an agreement to cover those additional cleanup costs.

Five years ago, the US government asked Exxon for money to continue the cleanup effort there. In its latest court filing, Exxon appears to be trying to shirk its obligation to pay for additional damages. In its filing to the US District Court in Alaska on September 30, the company argues that the agreement it reached with the government only covers “restoration” work—not additional “clean-up.”

Before we get furter into the details, a quick recap: In 1991, Exxon struck a deal with the government to pay just $900 million in damages over 10 years for cleanup costs. The deal allowed the government to reopen the case, if it could prove that there were remaining problems that had not been adequately addressed. That “reopener” clause only extended until September 2006. So when that date rolled around and there was still evidence of that habitat and species were directly impacted by the spill, the Department of Justice and the State of Alaska filed a claim asking Exxon for an additional $92 million payment.

Exxon has so far rebuffed their claim. In the company’s latest court filing, it argues that the original agreement “makes clear that the parties limited the Reopener to ‘restoration projects,’ that ‘restoration’ is something separate from and in addition to ‘clean-up.'” The agreement, the company argues, “ended Exxon’s further obligations for ‘clean-up’ once and for all.”

Meanwhile, the US Department of Justice doesn’t seem all that concerned about making Exxon pay up anytime soon. The department’s own filing to the court argues that it’s premature for Exxon to argue about whether or not they have to cover a specific type of restoration project, because scientists are still studying the situation anyway. The filing does note, however, that government officials have found that oil in the Sound has “been degrading at a far slower rate than was anticipated at the time the Parties entered into the Consent Decree and had remained toxic and available to natural resources, such as sea otters and harlequin ducks which use these intertidal habitats.” In other words, there are still problems up there that need to be addressed, and that will cost money.

Rick Steiner, a retired University of Alaska marine biologist who spent 14 years working in the Prince William Sound, has filed his own brief in the case, hoping to push DOJ to actually make Exxon pay up. But, he says, the agreement was “a sweetheart deal from day one,” setting the price for Exxon relatively low and making it difficult, from the start, for the government to seek additional payment. “It’s absolutely maddening,” Steiner says. “None of the parties, US or Exxon, has the public interest in mind.”

A DOJ spokesman declined to comment because the court case is ongoing. But for Steiner—and probably many others—the Exxon situation raises questions about how serious the DOJ will be when it comes time to make BP pay up for the most recent catastrophic spill.